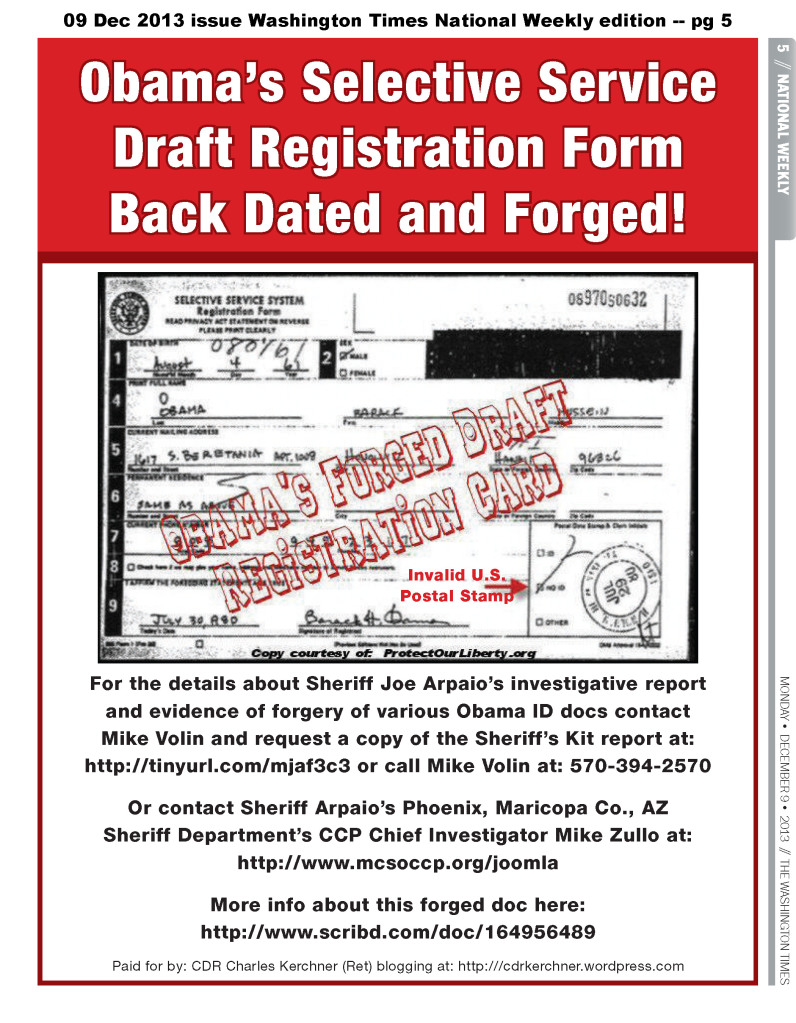 Someone has finally decided to put out Barack Obama’s forged documents in a mainstream paper. On Monday, CDR Charles Kerchner (Retired) took out a full page ad in the Washington Times to make people aware of the fraudulent documents of Barack Hussein Obama, specifically his back dated and forged selective service form.

Kerchner’s ad appeared on page 5 of the Washington Times National Weekly and included a large copy of Barack Obama’s Selective Service form, along with various URLs to other pertinent information on the various forgeries of Obama’s documents.

If you thought Kerchner was done with only one ad dealing with Obama’s Selective Service form, you would be mistaken. He also dealt with John Boehner.

Kerchner blasted House Speaker John Boehner (R-OH), who apparently has taken a similar stand to that of Markwayne Mullins, who said he believes that Obama’s birth certificate is a fraud, but doesn’t “give a sh*t.”

Another full page ad appeared in the Times in which a “Dear John” letter was written, calling him out for his silence.

Kerchner included links in his ad to Arizona Chief Investigator Michael Zullo’s sworn affidavit, attesting to the fact that Obama’s documents have been forged, as well as documentation provided by Debbie Schlussel, which Obama’s Selective Service registration is a fraud.

The pressure continues to build. However, don’t expect establishment Republicans to get on board. After all, they this is really no big deal for them, and they are ready to roll over in bed with the Democrats as they have already demonstrated. However, there is hope that some Tea Party representatives, like Steve Stockman, who do believe there is validity to the information and want to see a serious inquiry for the public’s best interest, will act. Stockman even passed out copies of Articles of Impeachment to every House member earlier this year.

Contact your representative or senator today and let them know you want this issue investigated and resolved, including impeachment and removal from office of Barack Hussein Obama if necessary.