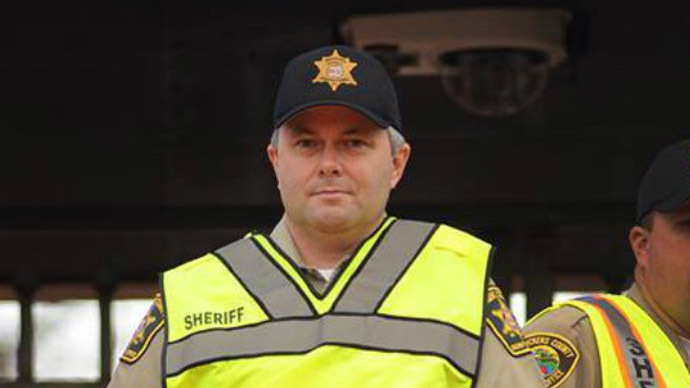 A South Carolina sheriff decided not to lower the U.S. flag at his office to honor former South African President Nelson Mandela, who died on Thursday, because he was not an American citizen.

The decision came despite an executive order by President Barack Obama urging American flags to fly at half-staff in honor of the anti-apartheid leader.

Sheriff Rick Clark of Pickens County originally posted about his decision on Facebook, saying that while Mandela was a great man, the flag should only be lowered at the American embassy in South Africa, not at home. Instead, Pickens said he would lower the flag over the weekend to honor a law enforcement officer who died on-duty and for Pearl Harbor Day, but that the flag would be back up to its normal position on Monday, December 9.

“It’s just my simple opinion that the flag should only be lowered to half-staff for Americans who sacrificed for their country,” Clark told WHNS News in an interview.

“To show a sign of respect for what Nelson Mandela’s done, I have no problem with lowering it in South Africa, in their country,” he added. “But in our country, it should be the people, in my opinion, who have sacrificed for our country.”

Reaction to the sheriff’s decision has been mixed. Some defended the Clark’s decision, with one Facebook poster saying, “Rick, you do what is right no matter what anyone else says! Make us proud. Our flag is for our citizens and our country!”

Others, meanwhile, criticized Clark for perpetuating stereotypes about a racist South, and chided the Sheriff’s Department on its official Facebook page.

“Shame on you… Mandela made a difference for all American or not,” wrote one user. “And you shame your town by ignoring a executive order. You have invited the topic of racism into this.”

As CNN noted in its report, American presidents have ordered flags lowered in honor of foreign citizens in the past. Bill Clinton issued the same order when former Israeli Prime Minister Yitzhak Rabin was assassinated during the 90s, and the practice dates back to Lyndon Johnson, who did it when former British Prime Minister Winston Churchill passed away in 1965.

Regardless, there’s no penalty for deciding to go against an executive order on flag conduct, and Clark won’t be disciplined for his decision.

“He’s not breaking a law. It’s his decision. And I support the decision of the sheriff,” Chief Deputy Creed Hashe told CNN.