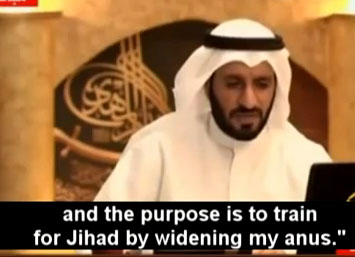 Sometimes the exploration of Islam leads to bizarre forks in the road and this is one of those times. Several months ago I wrote a piece titled New Fatwa For The Free Syrian Army: No Killing of Believer Lice in Muslim Beards and honestly I didn’t think I would find anything more bizarre. In that case I was slightly entertained to be honest. In this case I am just as amazed, but not entertained. Sickened is the only word to describe how I feel.

I don’t even know how to write about a subject like this so I will just spit it out. Here is a video of a London-based cleric who says it is OK to allow yourself to be sodomized so long as your intentions are pure. Pure intentions would be about widening your anus to facilitate the placement of bombs.

You can trust the translation. This is what MEMRI does. This is not a fly by night YouTube user with a warped sense of humor. I can also tell you that the video will be taken down at some point. I have found evidence that this video was published in articles by Gateway Pundit and two other publications only to be removed by YouTube. I am sure there are those who do not want you to see it for various reasons.

Let’s see what our friend Raymond Ibrahim has to say on the subject, via Gatestone Institute:

Not only did the original “underwear bomber” Abdullah Hassan al-Asiri hide explosives in his rectum to assassinate Saudi Prince Muhammad bin Nayef—they met in 2009 after the 22-year-old holy warrior “feigned repentance for his jihadi views” — but al-Asiri apparently had fellow jihadis repeatedly sodomize him to “widen” his anus in order to accommodate the explosives— all in accordance with the fatwas [religious edicts] of Islamic clerics.

A 2010 Arabic news video that is making the rounds on the Internet gives the details. Apparently a cleric, one Abu al-Dema al-Qasab, informed jihadis of an “innovative and unprecedented way to execute martyrdom operations: place explosive capsules in your anus. However, to undertake this jihadi approach you must agree to be sodomized for a while to widen your anus so it can hold the explosives.”

Others inquired further by asking for formal fatwas. Citing his desire for “martyrdom and the virgins of paradise,” one jihadi, (possibly al-Asiri himself) asked another sheikh, “Is it permissible for me to let one of the jihadi brothers sodomize me to widen my anus if the intention is good?”

After praising Allah, the sheikh’s fatwa began by declaring that sodomy is forbidden in Islam,

However, jihad comes first, for it is the pinnacle of Islam, and if the pinnacle of Islam can only be achieved through sodomy, then there is no wrong in it. For the overarching rule of [Islamic] jurisprudence asserts that “necessity makes permissible the prohibited.” And if obligatory matters can only be achieved by performing the prohibited, then it becomes obligatory to perform the prohibited, and there is no greater duty than jihad. After he sodomizes you, you must ask Allah for forgiveness and praise him all the more. And know that Allah will reward the jihadis on the Day of Resurrection, according to their intentions—and your intention, Allah willing, is for the victory of Islam, and we ask that Allah accept it of you.

Writing about Islam leaves me speechless at times. I suppose it’s OK to take on every guy in “Cell Block-D” just so your intentions are pure and it’s about the bombs and not about being a “man ho.”

Once again, I ask the question. Is Islam really compatible with the Western World?

Do you really want this type of thinking becoming more and more prevalent in America?

I don’t care what they do overseas, so long as they keep it there. But they really need to keep it there. My biggest objection to immigration proposals moving through our legislative branch is Islamic jihad. The terrorists come in illegally through our Southern Border and these people are already here.

If you see any “bow-legged” Muslims walking toward you, run like the wind.