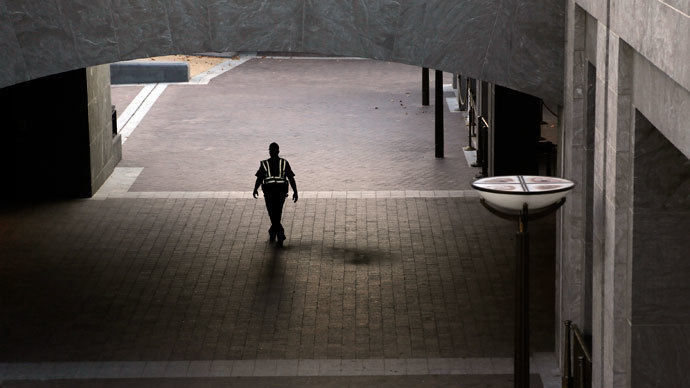 The Washington, D.C. officer charged with producing child pornography while on duty has been declared dead after being pulled from the Potomac River Tuesday evening.

The Metropolitan Police Department confirmed on Wednesday that the body of the man pulled from Hains Point, between the Potomac and the Washington Channel, was that of 32-year-old officer Marc Washington. The officer was arrested last week and charged with taking nude photographs of a missing 15-year-old girl who’d recently returned to her apartment. If convicted, he faced up to 30 years in prison.

On Monday, Washington was released from jail and placed under 24-hour house arrest at his father’s home. He was wearing a GPS device so that police could monitor his movements, and NBC 4 reported the device was on his ankle when he was pulled from the water on Tuesday.

According to the Washington Post, law enforcement officials stated they received a call around 8:15 p.m. from a man who said there was a person in the water. An empty car connected to Washington was found near the scene, along with clothing, and dive teams found the officer in the water before 9:30 p.m. Washington was taken to a nearby hospital, where he reportedly died soon after arriving.

Police have not stated the cause of death yet, nor have they mentioned suicide as a possibility. An investigation is currently underway.

Meanwhile, the Post reports a separate officer has been placed on desk duty as police look into whether he tipped off Washington regarding his arrest. The same evening that the young girl returned home, Washington arrived at her apartment and asked to speak with her alone. He ordered her to undress as he took photographs, saying it was standard procedure. Shortly after he left, the mother called 911 and told police what happened.

Washington was arrested soon afterwards, but he was caught deleting the photos he had taken on his camera. Police say they were able to recover the photos, some of which reveal at least two other underage girls. According to NBC 4, there were “hundreds” of images on Washington’s camera, dating back to 2011.

In what police consider to be an unrelated case, another D.C. officer was being investigated last week for possibly running a prostitution ring out of his apartment. That incident also involved a young missing girl, this time a 16-year-old, and potentially six other women who worked out of the officer’s apartment and had sex for money. This officer has yet to be arrested or charged, but has also been placed on desk duty as the investigation continues.