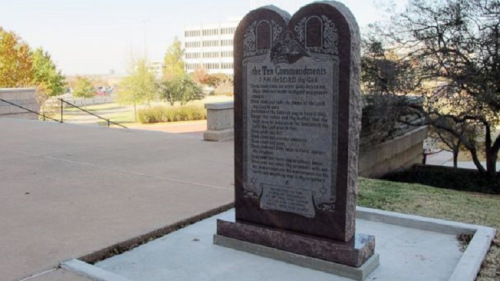 When has evil become so open and in your face, no longer content to hide in the shadows?

In 2009, the conservative-led Oklahoma state legislature approved a privately funded Ten Commandments monument, which was erected last year outside the state Capitol building.

Ever since the approval, opponents have called into question the constitutionality of the monument. The Oklahoma chapter of the American Civil Liberties Union has filed a lawsuit seeking its removal.

The latest: Satanists are demanding “religious parity” — their “right” to put a monument to Satan right next to the Ten Commandments.

The New York-based Satanic Temple notified Oklahoma’s Capitol Preservation Commission that it wants to donate a monument and plans to submit one of several possible designs this month, said Lucien Greaves, a spokesman for the temple.

Greaves at a Satanic Temple rally on Jan. 25, 2013, on the Capitol Steps of Tallahassee in support of Florida Governor Rick Scott’s Senate Bill 98.

In a letter to state officials, Greaves wrote: “We believe that all monuments should be in good taste and consistent with community standards. Our proposed monument, as an homage to the historic/literary Satan, will certainly abide by these guidelines.”

The Republican state representative Mike Ritze, who spearheaded the push for the Ten Commandments monument and whose family helped pay the $10,000 for its construction, declined to comment on the Satanic Temple’s effort.

Greaves credited Ritze for opening the door to his group’s proposal: ”He’s helping a satanic agenda grow more than any of us possibly could. You don’t walk around and see too many satanic temples around, but when you open the door to public spaces for us, that’s when you’re going to see us.”

Another Republican state representative Bobby Cleveland says many Christians feel they are under attack as a result of political correctness. He dismissed the notion of Satanists erecting a monument at the Capitol, “I think these Satanists are a different group. You put them under the nut category.”

But Brady Henderson, the legal director for ACLU Oklahoma, said if state officials allow one type of religious expression, they must allow alternative forms of expression, although he said a better solution might be to allow none at all on state property. ”We would prefer to see Oklahoma’s government officials work to faithfully serve our communities and improve the lives of Oklahomans instead of erecting granite monuments to show us all how righteous they are,” Henderson said. “But if the Ten Commandments, with its overtly Christian message, is allowed to stay at the Capitol, the Satanic Temple’s proposed monument cannot be rejected because of its different religious viewpoint.”

When asked what the Satanic monument would look like, Greaves said one potential design involves a pentagram, but he doesn’t want to “reveal too much about the possible design options.” He did hint that his “favorite design, at the moment, is an interactive display for children.” He expects the monument, if approved by Oklahoma officials, would cost about $20,000.

Greaves needs no longer thrash around for a suitable design for his monument.

Egyptians have already come up with one! Here it is:

Source: AP (via The Guardian)