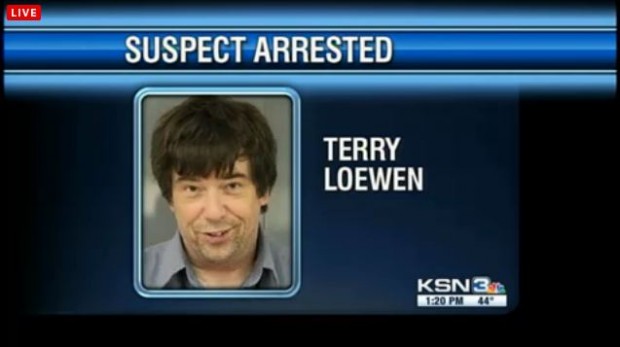 How long before Hamas-CAIR starts crying that this devout Muslim was “entrapped”? How many more plots like this one do there have to be before our governing officials start calling upon Muslims in the U.S. to reform and expunge the quran of its calls to violence and hatred?

An FBI sting has led to the arrest of a Wichita, Kan. man who thought he was about to die in a suicide car bombing that targeted a terminal at the city’s Mid-Continent Airport.

Terry Lee Loewen, 58, worked at the airport as an avionics technician. This gave him access to airport grounds. He was arrested before dawn Friday after he tried to open a security gate and get on the tarmac, the Kansas City Star reports.

According to a three-count complaint, Loewen discussed his view of faith as a Muslim. That included expressing “his desire to engage in violent jihad on behalf of al Qaeda” during an online conversation with someone whom, unbeknownst to him, was an FBI employee.

“I don’t understand how you can read the Qur’an and the sunnah of the Prophet (saw) and not understand that jihad and the implementation of Sharia is absolutely demanded of all the Muslim Ummah,” Loewen allegedly wrote Aug. 5. “I feel so guilt-ridden sometimes for knowing what’s required of me but yet doing little or nothing to make it happen. I love my Muslim brothers and sisters, whether they agree with me or not, it’s just hard to deal with the denial that some of them appear to be going through.”

Osama bin Laden and American-born al-Qaida cleric Anwar al-Awlaki “are a great inspiration to me, but I must be willing to give up everything (like they did) to truly feel like a (sic) obedient slave of Allah (swt),” he wrote a few days later.

Later that month, he asked for help finding “someone who is active in jihad and could use an occasional influx of ‘help’ … I just hate the kaffar government and those who are following it to the Hellfire, and the sooner it and its followers get there, the better.”

Loewen was trying to drive a van packed with explosives to a terminal as part of a plan he spent months developing, a Department of Justice statement says. He “talked about his commitment to trigger the device and martyr himself.”

The explosives were rendered inert by the FBI and the public was never in danger. Agents were drawn to Loewen early last summer after he made statements about jihad. He is with trying to use a weapon of mass destruction, and attempting to provide material support to al-Qaida in the Arabian Peninsula, a designated foreign terrorist organization.

Many national Islamist groups have criticized similar sting operations, arguing the FBI is manufacturing a terrorist threat where it might not exist. If Loewen’s correspondence in the complaint proves accurate, however, he was a man with the motivation and access to pull off a horrific attack. Left alone, he might have found ways to make his own bomb.

At one point, Loewen acknowledged not knowing whether he could trust his contact. But it wasn’t enough to discourage him from pursuing an attack. “my greatest fear is not being able to complete an operation because I was set up,” he wrote. “I hate this government so much for what they have done to our brothers and sisters, that to spent (sic) the rest of my life in prison without having taken a good slice out of the serpents head is unacceptable to me.”

If convicted, Loewen could face life in prison.