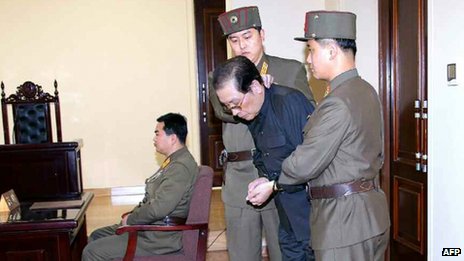 Chang in court on Friday (AFP)

North Korean state news agency KCNA has announced that Chang Song-thaek, uncle of the North Korean Leader Kim Jong-un, has been executed. Chang, who helped his nephew during the early days of his leadership was described as being ‘worse than a dog’ during the announcement that said he had been executed for acts of treachery.

“If confirmed, this is another example of the extreme brutality of the North Korean regime. We are following developments in North Korea closely and consulting with our allies and partners in the region,” (source)

Chang was executed on Thursday shortly after a special military trial. According to KCNA Chang:

State TV this week showed photos of Chang being dragged out of his seat at a meeting by two officers, in an extremely rare public humiliation of a figure who was then demonized as a drug-taking womaniser.

The Kim family has ruled the North for six decades with an iron fist, regularly purging those showing the slightest sign of dissent. Most are executed or sent to prison camps.