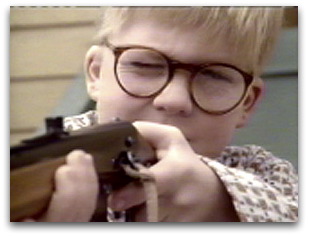 That’s right…a BB gun. That iconic, much-desired gift from the movie,  A Christmas Story. Apparently the government is just as deeply concerned about the potential of someone putting an eye out with a BB gun as Ralphie’s mother was. They are so concerned that if you don’t register your air gun, pellet gun, or BB gun, you could go directly to jail. Do not stop, do not pass go, do not collect $200.

The Graves Act is the primary statute that forms the spine of New Jersey’s oppressive gun control laws. It requires a minimum term of imprisonment and ineligibility for the violation of gun laws, even for first time offenders. Children are not exempt – they too are subject to strict punishment under the harsh gun control law. Punishable violations under the act include:

Under the Graves Act, all guns must be registered, and this includes BB guns, pellet guns, and air guns, despite the fact that they are not actually “firearms”.  According to the ATF, the definition of a firearm is very specific:

“The term “firearm” is defined in the Gun Control Act of 1968, 18 U.S.C. Section 921(a)(3), to include “(A) any weapon (including a starter gun), which will, or is designed to or may readily be converted to expel a projectile by the action of an explosive; (B) the frame or receiver of any such weapon….” Based on Section 921(a)(3), air guns, because they use compressed air and not an explosive to expel a projectile, do not constitute firearms under Federal law — unless they are manufactured with the frames or receivers of an actual firearm. Accordingly, the domestic sale and possession of air guns is normally unregulated under the Federal firearms laws enforced by ATF.” (source)

Despite the fact that it doesn’t fall into the definition, if you’re caught transporting a BB gun in your vehicle, for example, and it’s unsecured and unlicensed, you could face mandatory jail time. Even though these “guns” are powered by air or by spring mechanisms, the Graves Act does not differentiate between a BB gun and a sawed-off shotgun.

“In all honesty, kids who are charged are looking at mandatory jail time,” said New Jersey attorney William Proetta, adding that under the state’s Graves Act, a conviction could lead to prison time. “The only defense is to request a waiver but if that’s not granted, young kids can get a felony charge and their lives are basically over.”

As with anything, accidents do happen, of course. A ridiculous pro-gun control blog on the New York Times website gleefully outlined death and horrible injuries that occurred with BB guns in response to news reports about the application of criminal charges against unwitting BB, pellet, and air gun owners. In New Jersey, it appears that the 2nd Amendment only applies if you pay them for a registration in order to use that Constitutional right.

So if you happen to live in the state of New Jersey, and you want to put a BB gun under the Christmas tree this year, make your decision with full knowledge of the legal risks you could be facing. They’re working hard to demonize guns there, and your kid could pay the price by being labeled a felon for an innocent childhood rite of passage.