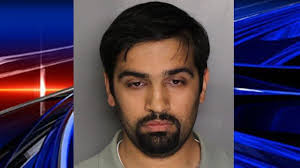 Hader Nasim was sentenced to 7 years to life on Friday for trying to arrange for the killing of his pregnant wife. Why did he want to have her killed? There were difficulties in the marriage and Nasim had already been through one divorce. He viewed another divorce as culturally unacceptable. So by all means, to save himself a little embarrassment he opted for a better plan which was to hire someone to murder his wife and unborn child.

Nasim was convicted of attempted murder and solicitation to commit murder in November.

Hader Nasim walked out of a courtroom Friday stone-faced, his hands cuffed behind his back, a seven-years-to-life prison sentence on his head and a judge’s observation in his ears that nobody really knows who he is.

Nasim, 31, was convicted last month of the attempted murder of his pregnant wife. He had hired a hit man to run her over with a truck and park it on her head for a while to “just make sure she’s dead.”

Sacramento Superior Court Judge Maryanne G. Gilliard said the recording of Nasim’s instructions obtained by an undercover police officer displayed a wretchedness “so disorienting and terrifying” that it ought to make anybody question themselves if they think they really know him.

“Sometimes those who think they know us the best don’t know us at all,” Gilliard said in handing down the sentence on the defendant, whose expression never changed during the hour long court hearing.

I can’t help but feel this is more than a sick man and that his Islamic upbringing had a lot to do with his decision. Women are treated as pieces of property in Islam. They are subhuman. The Bee goes on to report:

“Yeah, like you run her over, she’s on the ground, you back up on her, and you just stay on top of her,” Nasim instructed.

What got Gilliard the most was the part when the undercover officer asked how badly he should disfigure the wife, and whether Nasim wanted her presentable for an open-casket funeral.

“That is a window into the mind of Mr. Hader Nasim, and it is frightening,” the judge said.

Then there is the story that is not being acknowledged…

This was about killing his wife in the eyes of the court. The unborn child ceases to count in legal opinion because this is America. In 2013 America aborted it’s 50 millionth baby in 40 years.  That child had no legal rights in the womb.

So it’s not just Hader Nasim who is sick. This was a double-murder plot and the man could be out of prison in as little as 7 years. While he is there he will surely become more radicalized because our prisons are a breeding ground for Islam. But in all of this talk the unborn child was simply a side note or an asterisk.

The fact that so few people find anything wrong with that disturbs me as much as anything about this story. Sick people are all over. Whether this man’s Islamic heritage contributed to this crime is a matter of opinion. Would he have looked to kill his wife and unborn child if he were not Muslim? Possibly.

Islam does not have a patent on sick people, though it seems to produce more than its fair share.

But when a precious child was involved, and it is not really part of the story or consideration, then I find myself embarrassed for America and very much offended.

How far have we fallen?

What do you think America? Was this an attempted plot at a double-murder or do you disagree?