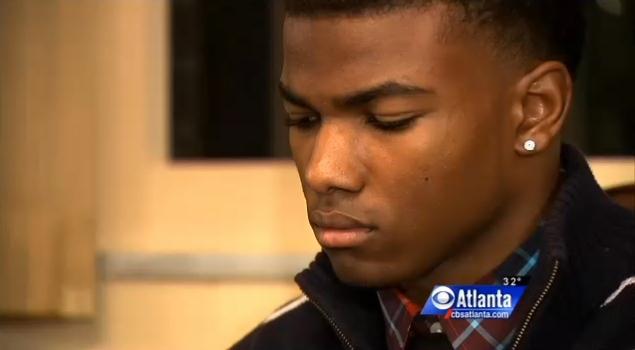 A high school senior has been suspended for a year and will not graduate on time for committing a terrible offense…he gave a teacher a hug.

Sam McNair is a 17-year-old student at Duluth High School in Georgia. He was suspended last week when a school hearing officer decided he violated the Gwinnett County Public Schools’ rules on sexual harassment.

“Something so innocent can be perceived as something totally opposite,” said McNair.

A surveillance camera caught the hug. It shows McNair placing his arms around the back and front of the teacher and giving her a “side” hug.

According to a discipline report, the teacher claimed McNair’s cheeks and lips touched the back of her neck and cheek.

McNair denied he kissed his teacher or that he sexually harassed her. He said he hugs teachers on a regular basis and has never been disciplined for it.

April McNair, Sam’s mother, told KCTV 5 that she is stunned about the suspension. She believes the district had a responsibility to notify her if her son’s hugging was becoming problematic before it suspended him and derailed his college plans.

“He’s a senior. He plays football and was getting ready for lacrosse and you’re stripping him of even getting a full scholarship for athletics for college.”

Sam does have a discipline record and previous suspensions but not for sexual harassment. He does not believe he should be punished for showing affection:

“You never know what someone’s going through. A hug might help.”

What happened to our priorities?