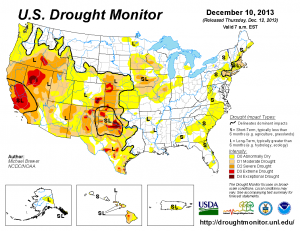 What in the world is Barack Obama thinking?  At a time when the United States is facing the greatest water crisis that it has ever known, Obama is allowing water from the Great Lakes to be drained, bottled and shipped to China and other countries around the globe.  Right now, the Great Lakes hold approximately 21 percent of the total supply of fresh water in the entire world.  Considering the fact that global water supplies are becoming extremely tight, that is an invaluable resource.  One recent UN report projected that two-thirds of the people in the world will be dealing with “water stress” and 1.8 billion people will be facing “absolute water scarcity” by the year 2025.  So why are we allowing foreign corporations such as Nestle to make millions upon millions of dollars pumping water out of the Great Lakes and selling it overseas?  Considering the massive worldwide water crisis that we know is coming in the years ahead, shouldn’t we be doing everything that we can to protect this precious natural resource?

Most Americans don’t realize this, but earlier this year water levels in Lake Huron and Lake Michigan were at their lowest levels ever recorded.  The following is from a recent article by Suzanne Eovaldi…

“Two of the Great Lakes have hit their lowest water levels EVER RECORDED,” the US Army Corps of Engineers reported early this year. Corps measurements taken in January of 2013 “show Lake Huron and Lake Michigan have reached their lowest ebb since record keeping began in 1918.”  The chief watershed hydrology expert warns Americans that “We’re in an extreme situation.”

So what is causing all of this?  Well, of course most of the water that leaves the Great Lakes is lost by evaporation.  But the fact that water is being steadily pumped out of the Great Lakes and sold overseas is certainly not helping matters…

“Plunging water levels are beyond anyone’s control,” says another expert, James Weakley. But in one of our most popular posts, last year we warned, “Lake Michigan water is being shipped by boat loads over to China! By using a little known loophole in the 2006 Great Lakes Compact, Obama minions are allowing Nestle Company to export precious fresh water out of Lake Michigan to the tune of an estimated $500,000 to $1.8 million per day profit.”

For even more on this, please check out the episode of “Conspiracy Theory” with Jesse Ventura that I have posted below…

All of this is happening at a time when the U.S. is getting ready to deal with the greatest water crisis this nation has ever known.

For example, according to a Reuters article from just a few weeks ago, the state of California is currently experiencing the driest year ever recorded…

To nurture his acres of pistachio trees, Tom Coleman has long relied on water from California’s mountain-ringed reservoirs, fed by Sierra streams and water pumped from the massive Sacramento-San Joaquin Delta.

But the driest year on record has left the reservoirs so depleted – and the delta so fragile – that state water officials say they may be able to provide just 5 percent of the water he and others were expecting for next year.

This water shortage is causing massive problems all over the state.  Just check out how a recent Fresno Bee article described what is happening to Pine Flat Reservoir…

Pine Flat Reservoir is a ghost of a lake in the Fresno County foothills — a puddle in a 326 billion-gallon gorge.

Holding only 16% of its capacity, Pine Flat is the best example of why there is high anxiety over the approaching wet season.

Gone is the healthy water storage that floated California through two dry years. Major reservoirs around the state need gully-washing storms this winter.

And further east, similar things are happening.  Lake Powell is fed by the once mighty Colorado River, and at this point the flow of water into the lake has been reduced to a “trickle”…

After 14 years of drought, Lake Powell is less than half full.

Water flows into Lake Powell, nestled between Utah and Arizona, from high in the Rocky Mountains via the Colorado River. More than 30 million people in seven states depend on the mighty Colorado for water to grow crops, fuel power plants and keep cities such as Las Vegas alive. But this year, the worst drought in a century has slowed the flow to a trickle.

In August, the federal Bureau of Reclamation cut, by 9 percent, the amount of water people in the southwestern United States could draw from Lake Powell. As states and counties squabble over their allotment of water in the coming years, hydroelectric plants (including the one on the Hoover Dam) could idle, and farmers are bracing for reduced crop production.

And most Americans do not realize this, but the Colorado River does not run all the way to the ocean any longer.  If something is not done soon, even the Hoover Dam could be forced to shut down.  For much more on this, please see this article.

Just recently, the Huffington Post ran an article entitled “These 11 Cities May Completely Run Out Of Water Sooner Than You Think“.  According to that piece, some of the cities that are heading for a massive water crisis are not cities that you would normally think of…

But those cities are far from alone.  The truth is that pretty much the entire western half of the country is drying up.  the following list of 15 facts about the coming water crisis is from one of my previous articles entitled “Dust Bowl Conditions Are Literally Returning To The Western Half Of The United States“…

1. The Ogallala Aquifer is being drained at a rate of approximately 800 gallons per minute.

2. According to the U.S. Geological Survey, “a volume equivalent to two-thirds of the water in Lake Erie” has been permanently drained from the Ogallala Aquifer since 1940.

3. Decades ago, the Ogallala Aquifer had an average depth of approximately 240 feet but today the average depth is just 80 feet. In some areas of Texas, the water is gone completely.

4. Scientists are warning that nothing can be done to stop the depletion of the Ogallala Aquifer. The ominous words of David Brauer of the Ogallala Research Service should alarm us all…

“Our goal now is to engineer a soft landing. That’s all we can do.”

5. According to a recent National Geographic article, the average depletion rate of the Ogallala Aquifer is picking up speed…

Even more worrisome, the draining of the High Plains water account has picked up speed. The average annual depletion rate between 2000 and 2007 was more than twice that during the previous fifty years. The depletion is most severe in the southern portion of the aquifer, especially in Texas, where the water table beneath sizeable areas has dropped 100-150 feet; in smaller pockets, it has dropped more than 150 feet.

6. According to the U.S. National Academy of Sciences, the U.S. interior west is now the driest that it has been in 500 years.

7. Wildfires have burned millions of acres of vegetation in the central part of the United States in recent years. For example, wildfires burned an astounding 3.6 million acres in the state of Texas alone during 2011. This helps set the stage for huge dust storms in the future.

8. Unfortunately, scientists tell us that it would be normal for extremely dry conditions to persist in parts of western North America for decades. The following is from an article in the Vancouver Sun…

But University of Regina paleoclimatologist Jeannine-Marie St. Jacques says that decade-long drought is nowhere near as bad as it can get.

St. Jacques and her colleagues have been studying tree ring data and, at the American Association for the Advancement of Science conference in Vancouver over the weekend, she explained the reality of droughts.

“What we’re seeing in the climate records is these megadroughts, and they don’t last a decade—they last 20 years, 30 years, maybe 60 years, and they’ll be semi-continental in expanse,” she told the Regina Leader-Post by phone from Vancouver.

9. Experts tell us that U.S. water bills are likely to soar in the coming years. It is being projected that repairing and expanding our decaying drinking water infrastructure will cost more than one trillion dollars over the next 25 years, and as a result our water bills will likely approximately triple over that time period.

10. Right now, the United States uses approximately 148 trillion gallons of fresh water a year, and there is no way that is sustainable in the long run.

12. Lake Mead supplies about 85 percent of the water to Las Vegas, and since 1998 the level of water in Lake Mead has dropped by about 5.6 trillion gallons.

13. It has been estimated that the state of California only has a 20 year supply of fresh water left.

14. It has been estimated that the state of New Mexico only has a 10 year supply of fresh water left.

If things don’t turn around soon, we are going to be facing an absolutely crippling water crisis in this country.

And according to recent forecasts, it appears that drought conditions may soon get even worse in the Southeast and the Southwest…

Ongoing winter storms won’t be doing much to relieve some drought-stricken areas of the U.S. In fact, conditions could get worse in the Southwest and Southeast, according to the National Oceanic and Atmosphere Administration.

NOAA last week forecast below-average precipitation for those regions this winter, meaning that “after some relief during the past few months,” the Southwest’s three-year drought is likely to redevelop and spread to the Southeast.

Sadly, most Americans are not aware of any of these things.

They just assume that there will always be plenty of fresh water for all of us to use just like there always has been.

But times are changing rapidly.

Please share this article with as many people as you can. 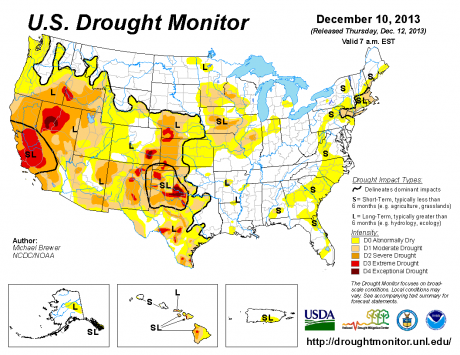