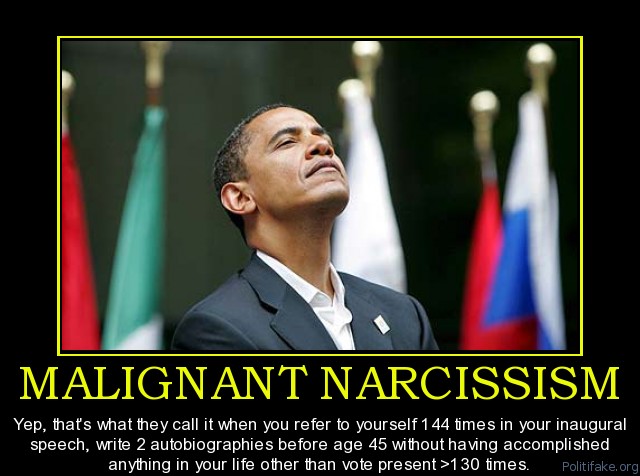 Narcissist: someone with excessive love or admiration for oneself characterized by self-preoccupation and lack of empathy for anyone other than themselves.

Barack HUSSEIN Obama will forever be known as the most narcissistic of all America’s presidents. Everything is all about him …ranging from ‘selfies’ taken at a state funeral, to photo-ops garnered on the backs of dead children, to single-handily taking out Osama bin-Laden (in his own mind anyway). Every press conference, every speech, every address to the nation is done for his adoration alone…for the man who is our president (gag) fancies himself King of America.

And if he is our King then ‘We the People’ are but his lowly subjects expected to fawn over him… bow down to him…and swoon when he walks by as we throw rose petals at his feet as it’s all about an audience of adoring subjects…for narcissists feed on being center stage at all times.

And in the world of politics center stage means photo-ops…all cameras zeroed in on me, me, me… looky at me…translation: Barack, Barack, Barack…as this is a president who relishes in attention…a man who will inject his image into historical events (as he did at the recent Pearl Harbor observances)…and even play to negative attention if it gets all eyes focused on him…for even negative attention is better than NO attention at all.

Just think about this for a moment…when Obama is scheduled to give a speech, address the nation, or hold a press conference, Americans are asked to tune it at a certain time. And as usual our media anointed ‘savior’ is always late…late so he can make a grand entrance and have all eyes focused on and mesmerized by him as he slowly makes his way to the podium…as the msm cameras lovingly pan him as he strolls…struts actually…up to said podium as his narcissistic brain tells him that we lowly subjects are sitting there in anticipation of his every word.

Now remember, the State of the Union Address is coming up next month and all State of the Union Addresses are given before Congress in the halls of Congress, and as Obama enters the room to a standing ovation…relishing in the applause… enamored by everyone standing and clapping for him… this adoration becomes his life blood as he flashes that big smirk of a smile for this is what narcissists do. And Barack HUSSEIN Obama does this quite well as he’s playing to his audience… using his audience to feed his enormous ego.

And herein lies the story of a president whose said enormous ego has allowed him to have done only two addresses to the American people from the Oval Office…for in the Oval Office there is NO audience for him to play to.

The Oval Office is the heart of the White House, so to speak, where past presidents have addressed the nation on critical issues like the economy, the military, or foreign policy. Addressing the American people from the Oval Office affords ‘We the People’ a one-on-one audience with the president, if you will, as there is NO cheering section present, NO ‘planted’ clappers, NO adoring fans…it’s just the President of the United States sitting at his desk looking into the camera like he’s talking to each and every one of us alone.

Addresses from the Oval Office are reserved for serious matters…many times matters of war…and many times matters of sorrow given while our nation grieves. Ronald Reagan’s consoling words after the Challenger disaster came from his heart and touched America’s soul…George W. Bush vowing revenge against those who murdered 3000 Americans on a warm and sunny September day comforted a stunned nation…and these are but two that come to mind. But above all what addresses from the Oval Office should NOT ever do is betray our country…betray those who serve…betray the trust America is supposed to have in its president. In his five years in office, Barack HUSSEIN Obama has given but two Oval Office Addresses and both were in 2010. Remember, in the Oval Office there is NO live audience to play to and with NO audience words spoken are the epitome of seriousness…of getting the job done…and while getting the job done is on Obama’s agenda it is NOT the job ‘We the People’ ever envisioned.

On June 15, 2010, Obama spoke from the Oval Office about the BP oil spill. This spill was an accident, yet Obama demonized the oil industry to the point of temporarily shutting down oil drilling in the Gulf. But in his shutting down of drilling…in his stopping construction of the Keystone Pipeline…in his catering to the EPA and their crying wolf about the ‘supposed’ dangers of drilling… Obama deliberately made us even more dependent on his brethren’s oil. And doing this from the Oval Office where his narcissistic self knew NO one could boo him or call him to task….he was able to wait on the people he is really serving for having the safety of NO physical audience allowed him to give yet another nod and a bow to his buddy…King Abdullah of Saudi Arabia.

On August 31, 2010, Obama gave his second address from the Oval Office announcing the end of US combat operations in Iraq. Now let that sink in for a moment…the President of the United States used the sanctity of the Oval Office to tell the enemy when we would be leaving their country, thus handing them a timetable for when they could waltz in and retake all that our troops had freed. And in that split second the lives of all our brave troops lost became to him mere expendable commodities …and all the American blood that was shed was now shed in vain. And this he proudly announced away from a live audience for he knew they would question this decision and so he chose deflection instead…true narcissist that he is.

Now when most people think of narcissism they also think of arrogance for the two go hand-in- hand. Remember, arrogance is having a sense of overbearing self-worth or self-importance… basically feeling superiority over others…and that fits Barack Hussein Obama to a tee doesn’t it.

The man who says he’s “doing what’s best for the country” when what he really means is ‘it’s my way or the highway’ speaks volumes of a man totally lacking in humility…a ‘community organizer’…who had the arrogance to do away with our free market health care system that encompassed a full 1/6th of our economy…and then replace it with a more expensive system that denies you your doctors… denies you your hospital of choice…denies you the policies you were happy with as his arrogant self wants you to know that he has deemed you ‘under-insured’…and soon to deny you your very right to life as those of a certain age will be unable to access life-saving medical treatment just to satisfy this man’s arrogant obsession with ‘fundamentally changing America’ to line up with his ideal of a more ‘just and fair society’…a society where ‘the haves’ are the devil trying to deny the ‘have-NOTS’ their Obama dictated just due.

Arrogance personified as Obama makes NO excuses for redistribution of your wealth to placate the ‘sponges’ who want… who demand…what you have but who will be damned if they have to work for it. And dare we forget his famous line that screams of arrogance at its very best…or should I say its very worst…as he declared in NO uncertain terms to Congress and to the American people that, “The Affordable Care Act is moving forward. You can’t shut it down.”

And let’s NEVER forget Obama’s arrogance concerning Benghnzi…his arrogance in knowing that his oh so controlled media downplayed this tragedy turning it into a non-issue as far as they were concerned. Only the most arrogant of the arrogant could turn the orchestrated murders of four Americans into a theater of the absurd complete with a laughable video as the supposed cause. And he had the sheeple smiling sweetly thinking all was as it should be for Obama’s arrogance does NOTHING but fuel their adoration for the man who thinks himself untouchable.

And so Barack HUSSEIN Obama…the man who rules by Executive Order… combines  together in a perfect meld both narcissism and arrogance and it’s ‘We the People’ who are the unfortunate recipients of the man who would be King.