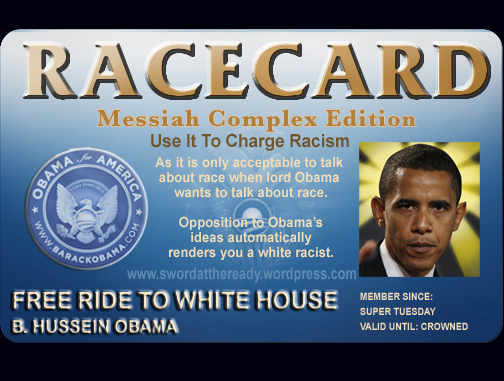 Impeachment…while it would be a symbolic gesture at best without the Senate on board, the US House of Representatives could indeed impeach Barack HUSSEIN Obama for crimes against America, and if the Senate did the job they were elected to do…including NOT listening to Harry Reid’s party line bloviations…they could for a change do the right thing for this country instead of doing what they perceive as the right thing to keep their cushy jobs.

And their self-perceived right thing is NEVER to vote against America’s first so-called black president…or as the politically correct like to say…America’s first African-American president…and note the left always uses hyphenated-Americans when describing what should be just ‘American’.

In today’s America three little words relating to this president are holding this country hostage…the words being ‘the race card.’ NEVER in our country’s history have such little words wielded such power for NEVER has America had a president who relishes in ripping off the scab of healing racial wounds, thus erasing decades of racial progress.

Those three little words have grown men and women in Congress cowering in a corner like naughty children…cowering in fear of being called racists NOT realizing that to some degree everyone is a racist whether or NOT they care to admit it or even realize it. Racism today has become a natural reaction to the antics and words of those like Jeremiah Wright, Jesse Jackson, Al Sharpton, Louis Farrakhan, and the other black ‘supposed’ leaders who fuel white hatred every chance they get by using race simply to stir and inflame political discontent. Never getting over the fact that NO one alive today had anything to do with slavery, these men…and let’s now add Oprah Winfrey into the mix for her recent racist comments…are still trying to hold today’s white Americans accountable for what happened to black men and women a century and more ago…and to do it for a price…bought and paid for by capitalism for personal gain and wealth…the very thing they claim to hate.

Wonder if their wealth will be redistributed by this president or is that reserved just for whites.

By using tactics of race-baiting and fear mongering, these ‘supposed’ black leaders…aided by our ever-loving alphabet media…have taken Barack HUSSEIN Obama and made him into something he is NOT…America’s first black president. Barack HUSSEIN Obama is America’s first bi-racial president for his mother and his entire side through his mother’s lineage was 100% white. So tell me do these ‘supposed’ black leaders only support the half of Obama who is black and spew their hate against the half that is white…or for that matter does Obama himself hate his white half with as much vehement disgust as he hates white Americans.

And the answer to that becomes clear as Obama loves to stroke his black half by pulling out the race card every chance he gets. Using it as a crutch against any and all who dare to question his socialist agenda, Obama has learned his lessons well…divide and conquer your enemy…and we white Americans are his enemy…by turning us against each other by using ‘collective guilt’ for fear of being called and labeled racists.

And yet even with the race card dangling over Congress’ head impeachment still remains a viable option (even though I personally prefer arrest) that can and should be used against this most hateful of presidents…against this thug and his Chicago-style political cronies…against a man who uses race to escape responsibility for his actions. Spoken of in hushed tones, talk of civil disobedience is brewing below the surface all across America as Americans are slowly waking up to the fact of just how bad and inept this president really is. Benghazi, Extortion 17, IRS scandals, the economy, and the monster known as ObamaCare…to name but a few of the things that have made Americans start to say, ‘the race card be damned.’

Everyday Americans…as in ‘We the People’ want…NO we demand…that Congress do something about a president who is a traitor to everything America and Americans hold dear. This president has made a mockery of our Constitution, our way of life, our religious values and ideals, our work ethic, and our exceptionality, and turned us into a nation afraid to take a stand for fear of being labeled as racists…for fear of ‘supposed’ black leaders saying we are criticizing the president just because he’s black…well guess what…NO more.

Barack HUSSEIN Obama, the man who fancies himself a dictator, has committed so many acts of treason that if he were white he would have been arrested and called to task long ago. But with the race card in play any criticism of him is tempered with, ‘it’s just because he’s black.’ NEVER mind that his policies both domestic and foreign are a complete and total failure. NEVER mind that he’s made our military fight politically correct wars NOT to be victorious but to ‘win the hearts and minds of the enemy.’ NEVER mind he’s armed the enemy. NEVER mind that he panders and caters to the ‘sponges’ of our society just to garner their votes. NEVER mind the LIES upon LIES upon LIES he feeds ‘We the People’ now almost on a daily basis. And NEVER mind that our Constitution is NOTHING but a worthless scrap of paper to the man who would be king. NEVER mind all that because he’s black…or so he claims…and that is all that matters.

But most importantly, because he perceives himself to be black does NOT give Barack HUSSEIN Obama the right to be excused for turning our beloved America…an America built on the exceptionalism of those who came to this country with a dream…into a country NO longer feared and respected but a country who is now mocked by the very ones who should fear and respect us the most.