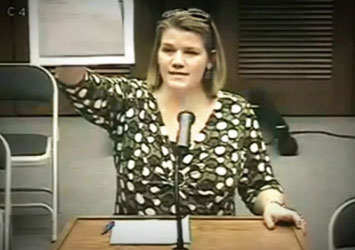 This would be kinda funny if it wasn’t so damn sad (or real life).

Check out this video of mother-of-three Karen Lamoreaux, member of Arkansas Against Common Core, completely owning the ridiculous educational failure that is the Common Core State Standards in her testimony before the Arkansas Board of Education on Monday.

“After listening to what was said this morning, I have come to the conclusion that this board is clearly as uninformed as the parents were when these standards were adopted.”

Too bad the board cut Lamoreaux off after only four minutes. She didn’t even get a chance to mention the privacy and testing concerns she had. Then again, to list all the concerns she probably actually has about Common Core wouldn’t have taken a mere session; it might have easily taken all day (or week… or month… or…).

Dumbing kids down is absolutely right. Apparently if you just know how to do simple math because it’s, well… simple, under Common Core, your answer would still be counted wrong because you didn’t do it in some convoluted, idiotic way that basically renders doing the math entirely pointless by the time you’re finished anyway. A simple 4th grade division problem regarding 18 students counting off to 90 takes an absurd 108 steps to get “right” via Common Core?

These are the “rigorous” standards that will make our children “college-ready”? Wha…? Did the Mad Hatter from Alice in Wonderland write these standards when he was smoking crack?

Wooooow. No wonder New York principals are reporting deep concern over the fact that their elementary school students are becoming so upset during Common Core testing, they are literally throwing up and soiling themselves. That’d make me want to puke, too.