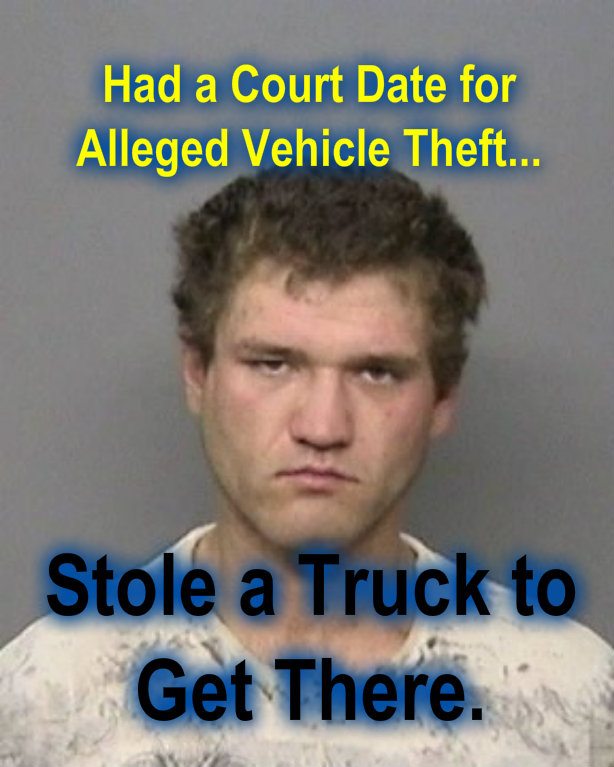 Earlier today I reported on a man demanding an application from McDonald’s by showing a gun in his waistband. When he was told to apply online, he decided that he preferred to apply in person.

As not to be outdone, Michael Heller proved that stupidity is not contained to the state of Virginia and gave more evidence that the Grand Theft Auto generation may not be “thinking outside the X-box.” This story comes to us from Redding, CA.

According to police a man admitted to stealing a truck on Thursday morning in order to make a court date for an unrelated stolen vehicle case.

John Westberg, 69, of Anderson, reported his 1989 Ford Ranger had been stolen.

The truck was located in the area of Platinum Way and Girvan Road. Michael Heller, 21, of Redding, was found driving the truck.

Police said he admitted to officers that he stole the truck because he needed a ride to court for an unrelated stolen vehicle case.

This is an interesting dilemma and a baffling line of reasoning. You are accused of stealing a vehicle. You don’t have a ride to court. So you steal another vehicle?

Is this how the youth of America now think? I am starting to think that stories of GMOs, chemtrails and covert poising of the water supply are understated.

Sebastian Murdock of the Huffington Post accurately voices the concern on everyone’s mind at this point, “It is unclear how Heller will get to his future court date.”