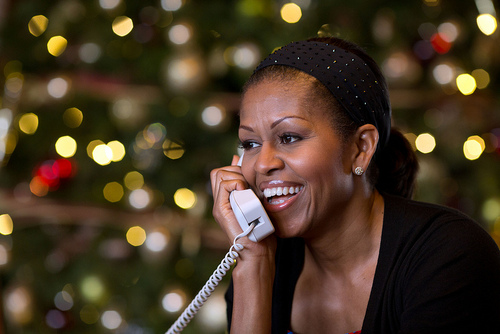 Christmas Day…a day of the year that is for anything but a discussion on ObamaCare.

Barack HUSSEIN Obama, since leaving Jeremiah Wright’s ‘G-D America’ church of 20 years attendance does NOT now regularly attend church, and Christmas Day is NO exception. And while he and Michelle do have a Christmas tree in their private quarters at the White House, a tree does NOT Christmas make…especially when year after year the tree is left behind as they jet off to Hawaii for yet another Christmas vacation taken on our taxpayer dime. Christmas to the Obama’s is lounging by the pool and playing rounds of golf…just another fun-filled day in paradise uninterrupted by the seriousness of prayers or the celebration of the Savior’s birth.

And with discussions about ObamaCare sure to come up in talk amongst the Obama’s…as would anything that bears Mr. Narcissist’s name…Michelle wanting ‘We the People’ to discuss health care…to discuss ObamaCare…on Christmas Day seems quite the norm to America’s wannabe royal family.

The norm to them maybe, but far from the norm to Christians, Catholics, and Protestants throughout America as Christmas is being hijacked by people like the Obama’s who have NO idea of the true meaning of Christmas. Christmas is also being hijacked by atheists, secularists, and progressives all with the goal of transforming Christmas into just another day of the year. And with school Christmas programs and parties becoming ‘Winter Festivals’, and with government offices and a multitude of commercial businesses having replaced the words ‘Merry Christmas’ with ‘Happy Holidays’ so as NOT to step on toes of non-believers, the 93% of Americans who celebrate Christmas and the 97% of Americans who are NOT in the least offended by the use of the words ‘Merry Christmas’ are now being dictated to by the 3% that are driving public policy for the rest of us…and we are doing little if anything to stop this.

And since she has NO idea of the true meaning of Christmas, into this group of Christmas hijackers charges Christmas Scrooge Michelle Obama…the woman who is trying to pull her lying husband and his miserable health care disaster out of the fire…is now asking 97% of the American population to put aside their family Christmas traditions and family talk to instead discuss ObamaCare.

If anyone deserves a lump of coal in their stocking it is Michele Obama for even mentioning this as a topic for Christmas Day conversation, much less using the sanctity of Christmas Day as a political forum for trying to win over women…for that is what this is about…the women who the Democrats so desperately need on their side come the 2014 midterm elections…is despicable at best…disgusting at worst.

Talk about a ‘War on Women’…this is Michelle’s own private war on both Christmas and on women.

With a recent Kaiser Family Foundation poll reporting that 49% of women now have an unfavorable view of ObamaCare, compared to 33% with a favorable view, you can understand…but NOT excuse…the desperation in this most despicable of political pandering on the day of Christ’s birth.

And when you consider that of all recent presidents, Barack HUSSEIN Obama is the one who has had the least involvement in the true message and meaning of Christmas, Michelle doing what she’s doing all makes sense…albeit warped sense at best.

On December 24, 2009, Barack HUSSEIN Obama, in his first Christmas message to the nation as president, delivered the most generic and bland of Christmas addresses said with NO emotion or belief in his heart as he described the miracle birth in Bethlehem as a nondescript “message of peace and brotherhood that continues to inspire more than 2,000 years after Jesus’ birth.”

In his 2010 Christmas address to the nation, Obama spoke that “we are our brother’s keeper, we are our sister’s keeper, our separate stories in this big and busy world are really one.” Nothing like throwing a call out to his oh so wanted New World Order in a Christmas message..

In his 2011 Christmas Address, Barack HUSSEIN Obama rehashed his 2010 message using slightly different words but again doing a call out to his New World Order way of thinking saying, “And this holiday season, let us reaffirm our commitment to each other, as family members, as neighbors, as Americans, regardless of our color or creed or faith. Let us remember that we are one, and we are a family.”

And in last year’s address given together as a couple, Michelle Obama for her part said, and I quote, “We both love this time of year. And there’s nothing quite like celebrating the holidays at the White House. It’s an incredible experience and one that we try to share with as many folks as possible.”

Uhhhh…excuse me but last year the Obama’s did NOT celebrate Christmas at the White House…last year just like they will be doing again this year…the Obama’s will be spending Christmas in Hawaii in yet another of their countless vacations taken on our taxpayer dime.

Lying about where one spends Christmas is but another lie in the Obama family ever expanding circle of lies. And if Michelle herself can lie about something as simple as where she spent Christmas she sure as hell can demean this most holy of days by asking folks to talk about ObamaCare instead of celebrating the birth of the man she and her husband mock every time they host a Ramadan dinner at the White House…good muslims that they are.

Merry Christmas everyone and don’t forget NOT to talk about ObamaCare on Christmas Day..