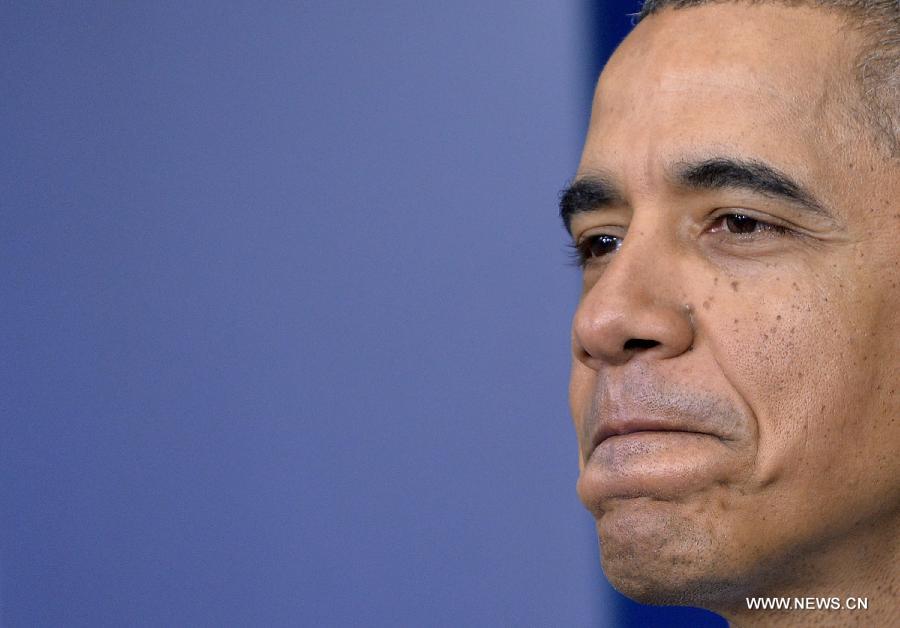 “The basic structure of that law is working, despite all the problems — despite the website problems, the messaging problems, all that.” – Barack HUSSEIN Obama 12/20/13

And so I watched yesterday’s Obama press conference remembering that throughout this year Obama has tried to shift blame for all his screw-ups away from his narcissistic self by passing any and all questions that needed answering off onto his joke of a mouthpiece, Jay Carney. Questions about ObamaCare’s many failures…questions about the NSA spying on American citizens…questions about his response…or lack thereof…to his self-instigated ‘he built it he owns it’ Middle East disasters…questions about Benghazi and Extortion 17…have all been basically ignored or worse…LIED about.

And in this, Obama’s last press conference of the year before he jets off to Hawaii for a two-week holiday…on our taxpayer dime of course…Obama now suddenly has decided to answer those questions himself but of course NOT with the truth…but with answers filled with more round-about bloviations that were lacking in facts but strong in additional subterfuge.

Strutting to the podium and leading off by trying to make us believe that all is getting better economically, Obama said that 2014 “can be a breakthrough year for America after a long era of recession and slow recovery.” Hey Obama, tell that to the millions of Americans still out of work…the millions who want to work that is…NOT your gimme-gimme you owe me ‘sponges.’ And of course tell that to the millions of Americans left in health insurance limbo…many still without health insurance…many still walking around in total shock after seeing just how unaffordable the Affordable Care Act really is…especially unaffordable when they are out of work.

In his remarks defending ObamaCare, Obama said with a straight face, “The health care website problems were a source of great frustration…On the other hand, since that time I now have a couple million people who are going to have health care on January 1. And that is a big deal. That is why I ran for that office.”

NO…again more lies for Barack HUSSEIN Obama ran for office for one reason and one reason alone…to bring about the downfall of our beloved American republic… period. And adding that the early problems with the Obamacare website “have largely subsided and that the chaos sown by the structural reform of the insurance industry will soon be smoothed over”….Obama is once again trying to place the blame for its failures on the insurance companies and off of his miserable self.

And continuing doing what he does best, Obama out-and-out LIED by claiming that more than one million Americans have signed up for health insurance on the exchanges over the past three weeks. Absolutely NOT true in any sense of the word for even if one million people logged onto Healthcare.gov just to take a look-see…one million Americans did NOT do finalized sign ups nor did they make the much needed first payments for policies ‘supposedly’ purchased. And the great majority who did sign-up signed up for Medicaid…thus getting a free ride that we taxpayers will have to finance with our hard earned tax dollars…yet again.

And now add in that as he’s done before Barack HUSSEIN Obama has unilaterally changed the ObamaCare law as passed by Congress. After seeing that the majority of people whose insurance policies were cancelled…cancelled because of his lying about being able to keep their health care plans and because of the law’s stringent and ridiculous regulations…could now simply NOT afford the new ObamaCare compliant policies offered on the exchanges and so would NOT sign up on them, Obama announced that he would ‘allow’ Americans to purchase ‘bare-bones’ policies…as in catastrophic insurance but at a higher deductible…actually at a much higher deductible than they were previously paying…and that they can now get a ‘hardship exemption’ from what Obama is trying to pass off as just another little glitch in the continuing ObamaCare ‘work in progress’

With this move, this most miserable of presidents is NOT just overstepping his executive bounds, but also, as in the past, is in violation of our Constitution as he once again is initiating changes into a law of the land of his own volition without Congressional approval. And as an added bonus he is creating millions of new ‘hardship cases’ that were NEVER ‘hardship cases’ before his abomination of a law was passed…passed before those in Congress even bothered to read it.

Visibly nervous as he claimed that any of the problems currently popping up “don’t go to the core”of the health care reform program, Obama still does NOT get that the fundamental concept and premise of ObamaCare is flawed for you do NOT cause the cancellation of millions of policies people were happy with just to insure the ‘sponges’ who get free medical care anyway by just walking into any emergency room in this country.

And with the crucial upcoming sign-up deadline fast approaching and Americans justifiably nervous and out for blood, Obama tried to deflect further criticism off of ObamaCare. But he should have continued on with ObamaCare because then thrown in his face was the harsh reality that 2013 was the worst year of his presidency…something Mr. Narcissist will NEVER admit. With his job approval rating at 42.5%/disapprove at 53.6%…with the direction he’s taking the country rating at right direction 29.5%/wrong direction at 63.6%…these reflect numbers much lower than George W. Bush’s were at this time in his presidency.

Guess that makes it official…Barack HUSSEIN Obama can NO longer blame GWB for all our country’s woes…Merry Christmas Obama…what a so deserved happy little lump of coal in your stocking.

And with that Obama switched topics yet again…this time to the NSA spying scandal. Saying there was NO evidence that the programs in question were “abused,” and adding“I have confidence that the NSA is not investigating in domestic surveillance or snooping around,” Obama remains totally clueless to the realities around him, for why then did he quickly add that it’s “important” to rebuild public confidence in the U.S. intelligence apparatus.

All more Obama empty rhetoric because just last week his own presidential advisory panel obviously agreed with ‘We the People’ as they recommended sweeping changes to government surveillance, including limiting the ‘bulk collection’ of Americans’ phone records by stripping the NSA of its ability to store the data in its own facilities.

So as he, Michelle, and the kids slink off to Hawaii….waving bye-bye to all the mess of his own doing…let’s hope and pray that new surprises do NOT pop-up during this Christmas week for Barack HUSSEIN Obama has given ‘We the People’ enough so NOT happy presents to last us a lifetime.