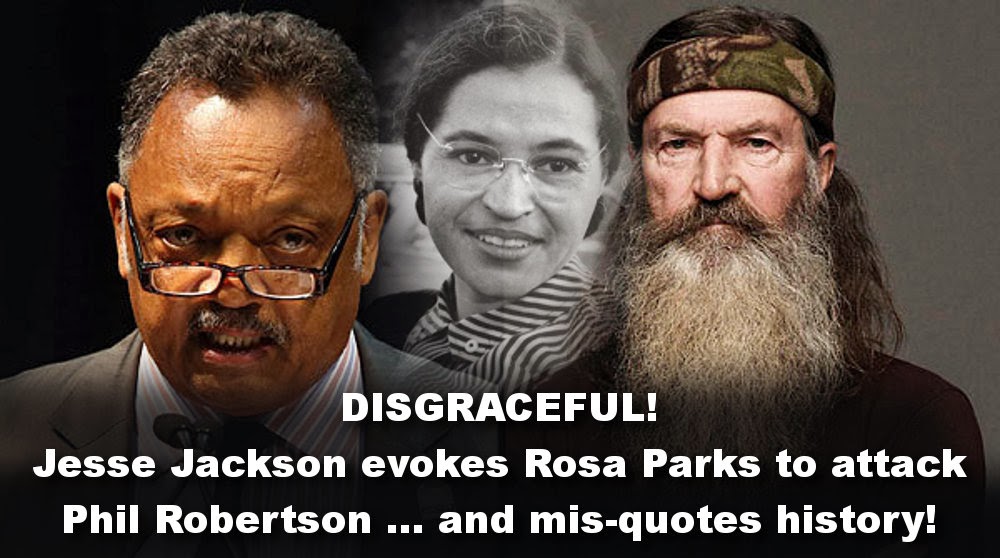 “These statements uttered by Robertson are more offensive than the bus driver in Montgomery, Alabama, more than 59 years ago,” Jackson said in a statement obtained by ABC News. “At least the bus driver, who ordered Rosa Parks to surrender her seat to a white person, was following state law. Robertson’s statements were uttered freely and openly without cover of the law, within a context of what he seemed to believe was ‘white privilege.’”

White privilege? How can you possibly play the “race card” when the issue has nothing to do with skin color?

Interestingly enough, certain allegations, by a gay staff member, were made against Reverend Jackson back in 2011. What kind of privilege is that? Don’t tell me that Jesse Jackson also feels entitled to this “white privilege.” Windy City Media Group reported:

In a document filled with stunning allegations, Tommy R. Bennett has filed a complaint with the City of Chicago Commission on Human Relations against the Rev. Jesse Jackson, Sr., and the minister’s Chicago-based organization, the Rainbow PUSH Coalition, claiming, among other things, harassment and termination on the basis of Bennett’s sexual orientation.

In the complaint, Bennett—who worked at the Rainbow Coalition from July 11, 2007 through Dec. 23, 2009, as the national director of community affairs—says that his sexual orientation was known throughout the workplace primarily because of his side job: being “Aruba Tommy” on the nationally syndicated radio talk program The Tom Joyner Morning Show.

Bennett claims that he experienced discrimination almost immediately after he started the job, saying that Caroline Wiggins, the membership and volunteer coordinator, complained to Jackson that she did not wish to work with Bennett because he is gay. After Wiggins was allowed to work under the field director, Rev. Gregory Seal Livingston, she allegedly said that she did not have to answer to Bennett. (Wiggins is no longer with the coalition. Windy City Times attempted several times to speak with Livingston about the matter, but had no response.)

In the complaint, Bennett says that “no investigation or action was taken in response” to his complaining about Wiggins. However, the most explosive charges revolve around Jackson himself. First, Bennett claims that at an all-staff meeting in 2008, he requested an LGBT-themed table for the national convention—and was flatly denied. When Bennett questioned why there could not be a table, Jackson allegedly “cursed at Mr. Bennett in front of all of the staff, and Rev. Jackson was visibly upset during the rest of the meeting.”

Things allegedly took a more disturbing turn after Bennett also took over the duties of Jackson’s travel assistant where Bennett says he was required to perform “humiliating” tasks. According to the complaint, in May 2008 Bennett was not allowed to accompany Jackson to Tanzania because Jackson was allegedly unhappy with the ways Bennett packed his items. Bennett also claims that he had to escort women to Jackson’s room and “clean up his room after sexual intercourse with women.

Mr. Bennett believes he was forced to do these tasks due to his sexual orientation,” adding that he had to escort women to such places as the Sheraton Hotel in New York and the Wynn Hotel and Resort in Las Vegas. Bennett claims that he let Jackson know that he “was uncomfortable cleaning up his hotel rooms, escorting women to his hotel room, being summoned to his hotel room after hours or packing his clothes.”

Whether the allegations by Tommy Bennett are true or not, they would seem to be more harmful than Robertson’s comments. Robertson voiced an opinion that might have hurt some feelings. Jackson allegedly impacted someone’s life with more than just words.

Furthermore, Robertson’s comments were backed by Biblical teachings and Reverend Jackson should know that. The left in this country is constantly trying to rewrite both the constitution and The Bible and neither is a Chinese buffet. You do not get to take only what you like and leave the rest behind. Whether it is God’s law or the laws of America, both were written for a reason.

The difference between people like Jesse Jackson or Al Sharpton and a man like Phil Robertson is quite simple. Phil seems to be an open book and if you don’t like his opinions you don’t have to. He isn’t trying to make you vote a certain way and obviously doesn’t care if you boycott his show because you disagree. He has no viable political agenda and stands on his real convictions. You may not like what he says but he has no apparent reason to lie about his feelings.

Jackson and Sharpton, on the other hand, make their livelihoods from stirring the pot. If they don’t anger people then there is seemingly no reason for their existence. And though both Jackson and Sharpton are now on record in support of gay-marriage and LGBT issues, you have to wonder if it is just an act. Here is an audio of Sharpton that doesn’t get enough air time. At the very end of his rant you will hear him talking about the “Greek Homos.”

“Greek Homos” would seem to be more racist than calling out homosexuals in general. Don’t you think? How is it that Al Sharpton also feels the right to “white privilege?” I am very confused. You can think what you will about Phil Robertson but I would suggest that he is genuine, if nothing else.

That would seem to be more than I can say for Jackson or Sharpton who seem to only be for LGBT issues when the spotlight is on them and the cameras are rolling. Both can not hide their political agendas because they have been active in politics for years. So whose comments are really more incendiary? Whose actions are really more incendiary? Whose comments can you trust to be genuine?

Jackson and Sharpton are politicians. They may not be on future ballots but that is who they are. You can’t trust anything they say any more than the white politicians. This isn’t a racial issue. But some people can turn anything into a racial issue and America is quite tired of it. Phil Robertson did not say that only black homosexuals are sinners and many black ministers have made similar comments without Jackson saying a word. I have no respect for Jackson, or most politicians for that matter. Most only pick fights when they think it will advance their agenda. Shame on them all. They could learn a few things from Phil Robertson.

Jackson is demanding to meet with A&E executives by the end of this week. His statement was released on Christmas Eve and he said he wanted the meeting within 72 hours.