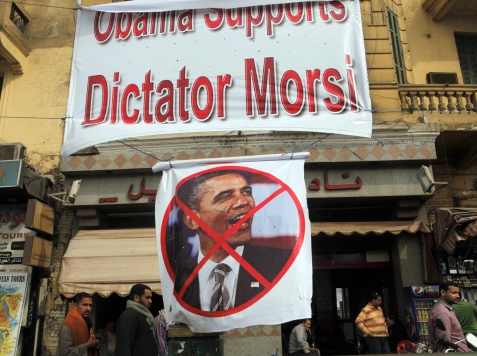 “It’s not possible for Egypt the state nor Egypt the people to submit to the Muslim Brotherhood terrorism” – Hossam Eissa, Egyptian Deputy Prime Minister

Did hell just freeze over as Egypt did what Barack HUSSEIN Obama dares NOT do…as their new military-backed interim government has officially designated the 80-year-old islamist group the Muslim Brotherhood a terrorist organization.

Wednesday’s decision to give this designation to the Muslim Brotherhood came after Tuesday’s suicide bombing attack against a police headquarters in the Nile Delta town of Mansoura…an attack that killed 16 people, most of them police officers.

“The Muslim Brotherhood remains as it was,” the Egyptian Cabinet said in a statement after the attack. “It only knows violence as a tool.”

And in the aftermath of this latest attack all Muslim Brotherhood activities in Egypt have been criminalized. The government also now has the authority to seize Muslim Brotherhood financial assets and anyone giving the group financial support can be arrested and imprisoned. Even those simply having membership in the Muslim Brotherhood are now deemed terrorists unless they publicly renounce the group. In fact, it’s now a crime to promote the Muslim Brotherhood ‘by speech, writing or any other means,’ and this new edict imposes a maximum five-year sentence for joining any banned group, and allows judges to impose lengthier sentences if terrorism is involved.

Egyptian Deputy Prime Minister Hossam Eissa’s words sum up Egypt’s decision quite well, “The government reiterates that there will be no return to the past under any circumstances and Egypt, the state and the people, will never succumb to the terrorism of the Muslim Brotherhood whose crimes have gone far beyond all moral, religious and human limits.”

Simply, the bottom line is that all activities of the Muslim Brotherhood in Egypt are now banned, including the demonstrations that are usually staged to instigate violence, with the military having even broader authority to move against anything they perceive as being a problem or anything they deem might turn into a problem.

And with the majority of the Egyptian people wanting a secular form of democracy, and with a constitutional referendum scheduled for January to be followed by presidential and parliamentary elections later in 2014, Obama’s firmly and stubbornly held position that the Muslim Brotherhood have a say in Egypt’s new government is being completely ignored and dismissed by Egyptian leaders. And smart they are for Egypt’s leaders know that Obama has appointed Muslim Brotherhood operatives in positions of power within our American government, and they do NOT trust him at all in anything to do with the Muslim Brotherhood or with their new government.

And so ends the Egyptian people’s nightmare of Obama’s support for the Muslim Brotherhood as our miserable excuse of a president has been put in his place…for now at least…by the very Egyptians he stabbed in the back with his support of Muslim Brotherhood puppet President Mohamed Morsi.

Remember Obama’s hissy fit over Morsi’s ouster that resulted in his recent withdrawal of his promised millions of dollars in military aid and hardware to Egypt just because 33 million Egyptians…more than double the amount who voted for Morsi…marched in protest against Morsi and his government just last summer.

Remember when Obama had Ingrid Mattson, president of the Muslim Brotherhood-linked group the Islamic Society of North America (ISNA), give a prayer during his 2009 Inaugural Prayer Service at Washington’s National Cathedral.  Well, this is the same Ingrid Mattson and the same ISNA that helps certify muslim chaplains for federal prisons.  And Mattson also heads a program at the Hartford Seminary that trains muslim chaplains for the U.S. military…the very same bunch who complains when Christian and Jewish religious leaders try to administer to our troops…and Obama goes along with it NEVER criticizing the muslim chaplains but has much to say about the Christian and Jewish chaplains…all NOT good.

Remember in April 2009, Obama appointed Arif Alikhan, the Deputy Mayor of LA, to the position of Assistant Secretary for Policy Development at the Department of Homeland Security. Alikhan has direct ties to the Muslim Public Affairs Council (MPAC) which has direct ties to the Muslim Brotherhood, and Obama appointed this practicing muslim to Homeland Security…says it all doesn’t it. And this is only one of the Muslim Brotherhood supporters and members he’s appointed to US government positions.

Remember June 4, 2009, when Obama invited as honored guests Muslim Brotherhood leaders to attend his speech to the islamic world in Cairo…a speech that was basically an apology and a bowing down to our enemies. Never mind that he knew well the Muslim Brotherhood’s publicly stated goal of “eliminating and destroying Western civilization from within”…a goal that he obviously heralds and supports.

Remember that Obama’s half-brother Malik Obama…who was the best man at his wedding to Michelle in 1992…serves as the executive secretary of the Islamic Dawa Organization (IDO), a group created by the government of Sudan and is considered by our State Department to be a terrorist state as well as being an umbrella organization for the Muslim Brotherhood.

Remember that Huma Abedin…who has deep family ties to the Muslim Brotherhood…was Deputy Chief of Staff (with Obama’s approval) when Hillary Clinton was Secretary of State, and as such had privy to top secret government information.

Remember that the infamous Valerie Jarrett, Obama’s chief adviser, addressed the Islamic Society of North America’s (ISNA) 46th Annual Convention, and that ISNA was a co-conspirator in the Holy Land Foundation case (the HLF is actually part of the US Muslim Brotherhood group ISNA), and that this group was found guilty of funneling millions of US dollars to Hamas…the very same Hamas who has direct ties to and is financed by Muslim Brotherhood operatives in the Middle East.

And remember Barack HUSSEIN Obama’s taped video address to ISNA…which again is directly tied to the Muslim Brotherhood…an address where he said, “my administration is proud to be your partner” and what an important part muslims are to the fabric of our American society.

Hear it for yourself…don’t take my word for it…

Sad isn’t it…for the harsh reality is that America’s current president by mere association is a terrorist himself…so sad indeed for America but good move on Egypt’s part as they have the backbone to do what our Congress should be doing but won’t…demanding that Barack HUSSEIN Obama declare the Muslim Brotherhood to be a terrorist organization and thus ‘person non-grata’ in these United States…period.