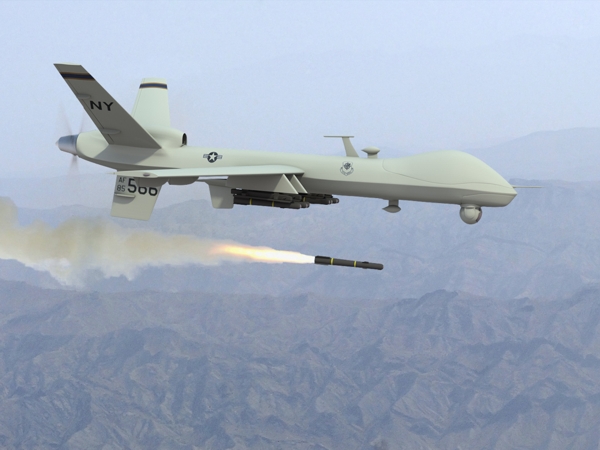 In an attempt to beat back gains by Al-Qaeda-linked insurgents, the United States is moving “dozens” of Hellfire missiles and surveillance drones into Iraq.

According to a report by The New York Times, the decision comes after Iraqi Prime Minister Nuri Kamal al-Maliki requested help from US President Barack Obama during a meeting in Washington last month.

The situation in Iraq has become a serious concern over the last year, as insurgents from the Islamic State in Iraq and Syria – Al-Qaeda’s regional affiliate – spread through western and northern parts of the country, as well as nearby Syria. More than 9,000 Iraqis have been killed in 2013. That figure includes three bombings that killed nearly 40 people on Christmas Day.

Despite the movement of missiles – 75 Hellfire missiles are being sent to Iraq alongside 10 ScanEagle surveillance drones – some experts believe the US response to be insufficient without the deployment of more powerful military weapons, such as armed drones. While Iraq’s foreign minister has suggested an American-run drone operation as a possibility, Maliki – who is likely running for a third term as prime minster – has yet to make such a request.

“We have not received a formal request for US-operated armed drones operating over Iraq, nor are we planning to divert armed I.S.R. over Iraq,” Bernadette Meehan, a spokeswoman for the National Security Council, told The New York Times.

According to Michael Knights of the Washington Institute for Near East Policy, the reconnaissance drones aren’t likely to turn the tide against the insurgents, considering their small range.

“The real requirement today is for a long-range, high-endurance armed drone capability,” Knights said.“There is one place in the world where Al-Qaeda can run a major affiliate without fear of a US drone or air attack, and that is in Iraq and Syria.”

For its part, the Obama administration has stated that the current shipment of military supplies will be helpful because Iraq has essentially used up its cache of missiles, has no real air presence, and has little surveillance capability.

Other plans to provide Iraq with supplies have also stalled in Congress, where a bill to lease and sell the country’s Apache helicopter gunships to Baghdad is languishing among concern that Maliki would use them to bully his political rivals. In the absence of American action, Maliki has purchased MI-35 helicopters from Russia.

Since the departure of US forces in 2011, Al-Qaeda has been able to re-establish its presence in Iraq by feeding off of Sunni resentment towards Maliki’s Shiite government. Through its base in Syria, the insurgents are able to deploy nearly 40 suicide bombers a month against Iraqi Shiites and Sunnis unwilling to fall under their rule.

According to local police officer Ayad Shaker, it doesn’t help that the country’s military capabilities aren’t as strong as they should be.

“I fought Al-Qaeda,” he said. “I am sad today when I see them have the highest authority in Anbar, moving and working under the sun without deterrent.”

Gareth Porter, a journalist and US national security historian, told RT that these events are forcing the American military to clarify its position with regards to the Middle East. The US has been capable of providing F-16 fighter jets to Iraq, but has consistently chosen not to.

“I think that there is a degree of inconsistency here and I think that what has been happening is that the United States has never really had a clear-cut strategy with regard to what the primary issue, the primary threat is in the Middle East,” Porter said. “It has on one hand continued to regard itself as part of a broad alignment against Iran and its influence in the region and on the other hand it has tried to make some efforts against the influence and the threat of Al-Qaeda oriented jihadist groups, particularly in Iraq and Syria but also in Lebanon as well.”

Porter said that this decision could be based on recent mistakes, particularly an underestimation of extremist groups in the region.

“I think they have failed to take seriously enough the degree to which the United States destabilized Iraq – quite seriously. And has caused problems certainly far-reaching and long-term,” he continued. “I think there’s a degree of denial, if you will, with regard to US policy toward Iraq. They have been trying to claim for years now that the situation is being stabilized, that the level of violence had gone down. I think they were really in denial on that question.”