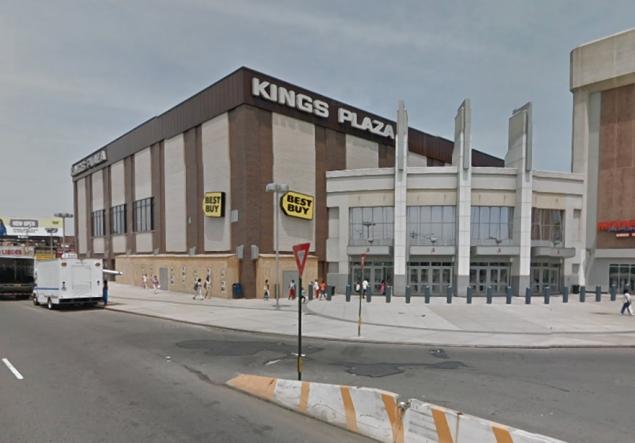 Like a riot scene out of a post-apocalyptic movie, a horde of teenagers descended on a Brooklyn mall Thursday and destroyed it…all for fun. Social media was used to plan the psychotic soiree, where the bored young people involved vowed to put the shopping center “on tilt”.

More than 400 crazed teens grabbed and smashed jars of candy, stole cheap items such as baby balloons and beat up security guards at Kings Plaza Shopping Center in Mill Basin between 5 p.m. and 7 p.m., merchants said.

A violent game of “Knockout” also broke out on the upper level of the mall — and one teen may have been carrying a gun, sources said.

Clerks, who scrambled to close up their shops, said they were terrified.

“I’ve been here seven years and I have never seen anything like this before — I’m so scared. I know they will come back,” said Abu Tabel, 31, a clerk at Candy Plaza 2.

“I was begging them to stop. There were a lot of kids hundreds of kids… [Security] would chase them out one door and they would come back in another door.”

Violent fights also broke out in front of McDonald’s and Best Buy, sources said. Video footage shows a pack of teenage girls punching each other and screaming as security guards struggled to break up the brawl.

Other teens were even more violent, sources said.

“You know they were playing the knockout game yesterday,” said perfume merchant Shante, 21, referencing a game in which teens try to knock each other out with a single punch.

“People were getting really scared. A tall white guy with a grey bubble coat was wearing a ski mask and a skull cap and he had his hand under his coat like he was holding a gun,” she said.

Clerks at shops such as Macy’s, Victoria’s Secret and Mac quickly rolled down metal gates as security guards tried desperately to break up the mob. The mall was closed for roughly an hour around 7 p.m., sources said. (source)

Not a single arrest was made.

This is despite the fact that some of the chaos was caught on video.

Other teens gloated about the attack on the mall via social media, but still, faced no repercussions from law enforcement.

Some teens took to Twitter to brag about the trashing the mall.

Another teen, Mark Wallace, added, “Sh-t was crazy at Kings Plaza. So the security started shutting down the mall and kicking all teens out but it was so much of us they couldn’t get control.”

Other teens bragged on social media about beating up security guards and breaking bus windows on the ride home.

“Teens rioting at Kings Plaza. They just shut the mall DOWN …. Rrowdy teens fighting and running through out the mall. It was crazy!!!” one mall-goer posted. (source)

Despite the eyewitness accounts, a CBS news report glossed over the incident, referring to it as a “disturbance”.

Police responded to the mall and escorted the teens out. No arrests were made.

According to police, there was no damage to the mall and nothing was stolen. It was unclear how the mob of teenagers came together or planned the disturbance. (source)

This is just another example of how the entitlement mentality is creating a generation of psychopaths, who must constantly up the ante of intensity to feel entertained and stimulated. Somehow, the day after Christmas, these young thugs were bored enough and unsatisfied enough that they felt the need to wreak havoc on a mall, terrorize and injure innocent people, and destroy untold amounts of property.

Someone needs to hit the “reset” button, and fast.