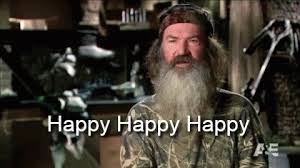 The indefinite suspension of Phil Robertson has come to a definite end. It is being reported that the suspension will have no effect on the upcoming season since filming has not resumed. Evidently the intense pressure on A&E worked for Duck Dynasty fans because Friday afternoon the network released this statement to Hollywood Reporter:

As a global media content company, A+E Networks’ core values are centered around creativity, inclusion and mutual respect. We believe it is a privilege for our brands to be invited into people’s homes, and we operate with a strong sense of integrity and deep commitment to these principles.

That is why we reacted so quickly and strongly to a recent interview with Phil Robertson. While Phil’s comments made in the interview reflect his personal views based on his own beliefs and his own personal journey, he and his family have publicly stated they regret the “coarse language” he used and the misinterpretation of his core beliefs based only on the article. He also made it clear he would “never incite or encourage hate.” We at A+E Networks expressed our disappointment with his statements in the article and reiterate that they are not views we hold.

But Duck Dynasty is not a show about one man’s views. It resonates with a large audience because it is a show about family … a family that America has come to love. As you might have seen in many episodes, they come together to reflect and pray for unity, tolerance and forgiveness. These are three values that we at A+E Networks also feel strongly about.

We will also use this moment to launch a national public service campaign (PSA) promoting unity, tolerance and acceptance among all people, a message that supports our core values as a company and the values found in Duck Dynasty. These PSAs will air across our entire portfolio.

Hurtful impact? What ever happened to “sticks and stones?” Whether you agree with Phil Robertson or not is not the biggest issue in my mind. The much bigger issue seems to be how thin-skinned the people of this country have become.  When people getting their feelings hurt starts effecting free speech then we have a problem.

For those who might have missed the Jim Crow reference, this is what Robertson said in that GQ interview:

“I never, with my eyes, saw the mistreatment of any black person,” Robertson is quoted in GQ. “Not once. Where we lived was all farmers. The blacks worked for the farmers. I hoed cotton with them. I’m with the blacks, because we’re white trash. We’re going across the field…. They’re singing and happy. I never heard one of them, one black person, say, ‘I tell you what: These doggone white people’—not a word!… Pre-entitlement, pre-welfare, you say: Were they happy? They were godly; they were happy; no one was singing the blues.”

I wouldn’t call that a ringing endorsement of Jim Crow laws. I think he could have worded it better but we are all guilty of that at times. I think it was meant to be more of an indictment of the welfare mentality that is rampant in this country and it’s not just black people who are part of that.

In the end this is just a television show and Phil Robertson is just an entertainer. He is a very popular entertainer but if you let his words negatively affect you then you should be ashamed. Be confident in who you are and ignore the naysayers. That’s what it takes to make it in this world.

What is your opinion?

Was this the right decision by A&E?