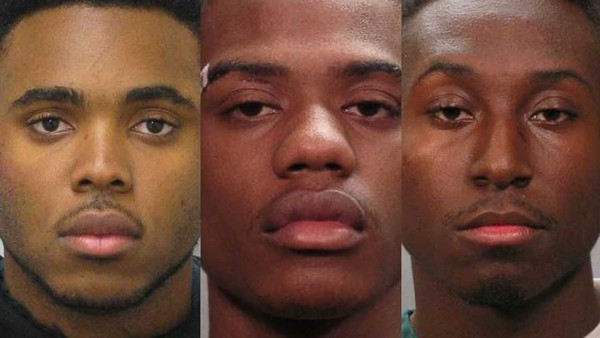 Apparently the Brooklyn, NY shopping center that was put “on tilt” by a horde of teenagers the day after Christmas wasn’t the only public place under attack this holiday season. On Christmas day, over 600 people, mostly teenagers, were involved in a vicious brawl at the Hollywood River City 14 movie theater in Jacksonville, Florida.

It all began when a group of approximately 30 African-American males stormed the theater because they apparently felt entitled to see the movie without paying. (source)

A spokeswoman for the Jacksonville Sheriff’s office, Lauri-Ellen Smith, reported that an off-duty female officer was the only person working security at the time.

About 60 officers responded and the unruly crowd responded by attacking them, resulting in a free-for-all battle in the parking lot that took about an hour to get under control.  You can see the video here of the mob of young people.

Unlike the Brooklyn mall riot, at least a few arrests were made in the Florida mob scene.  However, only 5  of the 600+ people involved were arrested.

Vehicles in the parking lot were damaged, and the movie theater property also sustained damage, but miraculously, no one was seriously injured.

This is just another example of the generation of psychopaths that has been created by the entitlement mentality. These thugs believed that they should be exempt from paying for their movie theater tickets like other people, and become violent when they were thwarted.

Between flash mobs of animalistic teenagers and thugs roaming around assaulting random victims in the Knockout “game” the thin veneer of civilization is rapidly eroding, making downtown America seem more like the scene of some post-Apocalyptic movie than a first-world country. How did we get to the point at which it is unsafe to leave your house and go to the movies or the mall?

Meanwhile, the government is striving to disarm law-abiding citizens, leaving us no way to protect ourselves against a society of truly psychopathic young people who believe that they should have anything they want.  These kids have no respect for others, no sense of empathy, and  no moral compass to guide them. They are not like the rest of us when they get swept up in these mobs.  In these situations, the participants have devolved to such a lack of scruples that they behave like packs of wild animals hunting down prey. When faced with an enemy who is not guided by the same rules that decent human beings are, superior defensive power is your only option if you want to survive.

The most difficult part of preparedness for some people is the concept of defense.  Many of us, especially those without military backgrounds or law enforcement training, don’t want to consider harming another human being. But as our society continues to devolve, being ready to protect yourself and your family is one of the most vital aspects of a preparedness plan. All of the storable food in the world is of no use if you don’t live long enough to eat it or if you can’t defend it.

As a good friend of mine has been telling me for years, “Predator or prey, the choice is yours.”