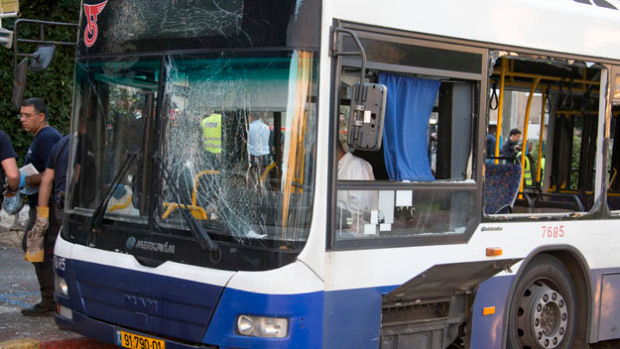 A pipe bomb was planted on an Israeli bus by Islamists. The bomb exploded on the bus in Tel Aviv just moments after the bus was evacuated. Thanks to the vigilance of bus passengers, no one was hurt in this potentially deadly explosion. “Palestinian” Islamists have yet to claim responsibility for the heinous attack, which certainly could have claimed the lives of many people had the bus been full of passengers. However, the Islamic thugs of Hamas hailed the attack as a “heroic action.” The attacks against Israel are increasing. Is this possibly due to the ongoing “peace negotiations,” or is it due to the “Palestinian” prisoner release? It is hard to say, but it is certain that the Islamists feel more emboldened and brazen in going after Israeli civilians. These attempted attacks aren’t going to derail the Obama Administration from forcing Israel into a peace accord. Nevertheless, just as the pipe bomb explosion occurred Sunday, another prisoner release was scheduled for Monday. The threats Israel faces are increasing as Islamists step up their attacks.

It is certain that Palestinian Islamists planted the pipe bomb that exploded on an empty Israeli bus on Sunday. Though no “group” has claimed responsibility for the attack, they are the most likely culprits.

A bomb that Israeli authorities suspect was planted by Palestinian militants exploded in a bus near Tel Aviv on Sunday after passengers were evacuated, and police said no one was hurt.

No group claimed responsibility for the bombing. But Fawzi Barhoum, a spokesman for the Islamist militant group Hamas, said in a statement the blast was a “heroic action” in response to what he termed the “continued crimes” of Israel’s occupation of land Palestinians seek for a state.

Hamas is the moral support for the Palestinian Islamists. Every Islamic group seeks the ultimate destruction of Israel. A pipe bomb explosion of this magnitude could have been catastrophic. There have already been reports of attacks on Israelis by Islamists, including an IDF soldier who was shot and killed near the Lebanon border just this past week. Supposedly a Lebanese soldier acted alone in this incident. However, given the area and the proximity to Hezbollah, this is suspicious. The brutal war with Hezbollah was not so many years ago. One spark could reignite this war. The pipe bomb blast is but one more incident that is creating an atmosphere of heightened fear.

A police spokesman, Micky Rosenfeld, said there were no injuries in the blast. The explosion blew windows out of the bus and charred the sides of the vehicle.

“Based on the findings at the scene by bomb disposal experts, it was a terrorist attack,” he said. “We’re continuing to search the area for suspects.”

Rosenfeld said the nature of the target and the nature of the device led authorities to determine that militants, not criminals, were behind the bombing. He declined to elaborate, and there was no immediate claim of responsibility.

There is no question this was a terrorist attack. But the bomb itself was discovered in a bag on the bus. Before it went off, the bus driver ordered all passengers off. The seriousness of this attempted attack can not be overstated. This could have caused mass casualties. A pipe bomb is a serious, dangerous device. Given the device, the only logical suspect would be Islamists.

“There were about 12 passengers on the bus. The driver stopped immediately when he was alerted to a suspicious object. It was a bag on the back bench, and he immediately ordered everyone off,” Eitan Fixman, a spokesman for the Dan bus company, was quoted as saying on the YNet news site.

If this attack had been carried out as it was planned, it could have been devastating. It also could have been one of the most deadly attacks on Israeli soil in almost two years. At this rate, it won’t be the last.

Violence in the West Bank has increased in recent months, and at least 19 Palestinians and four Israelis have been killed in the occupied territory since the negotiations got under way after a three-year break.

Rosenfeld said one of its bomb experts was examining the explosive “from a distance” when the bag blew up. He was taken to hospital for observation but was not listed as injured.

It was the most serious attack inside Israel since a bomb explosion wounded more than 20 people in Tel Aviv in November 2012. At the time, Israel was involved in heavy fighting with Palestinian militants in the Gaza Strip.

To say that this incident could have been devastating is an understatement of epic proportions. With the region in tatters, barely hanging by a thread, it is disturbing that the attacks are increasing in frequency inside Israel. Could this be a precursor to an all out regional war? It is definitely possible, as Islamists across the region are dedicated to Israel’s destruction. Meanwhile the rest of the world can only watch and wait and pray for the peace of Jerusalem.