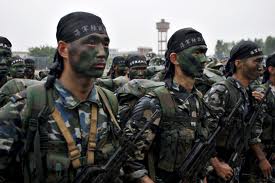 The recent spate of bellicose militaristic rhetoric emanating out of Chinese state media has continued in the form of a 7,500 word Xinhua editorial which outlines how Chinese president Xi Jinping has ordered the People’s Liberation Army to prepare for war.

According to a summary of the editorial, China’s “Mission Action 2013″ exercise was part of a move, “to deepen preparations for potential conflict to ensure that the troops are ready if called upon not only to fight, but to win.”

President Xi’s increased number of visits to PLA military zones over the past year are part of military reforms in order “to prepare his troops in the event of war,” the editorial stated.

The editorial cited the threats posed by Japan over the disputed Senkaku Islands, domestic terrorist attacks, and the increased US military presence in the Asia Pacific. These issues have caused “major changes” in China’s national security situation and warrant strengthening and increasing the “battle-readiness” of the PLA.

As we have highlighted, via its media mouthpieces, Beijing has recently engaged in a spate of announcements and commentaries that observers have noted for their aggressively jingoistic tone.

After Chinese state-run media released a map showing the locations of major U.S. cities and how they would be impacted by a nuclear attack launched from the PLA’s strategic submarine force, follow-up reports bragged of how China’s new H-6K strategic bomber can target US military bases in the Western Pacific with nuclear missiles.

Following discussion in state media about plans to to turn the moon into a Star Wars-style “death star” from which the PLA could launch missiles against any target on Earth, a display to promote China’s Jade Rabbit Moon rover also included a background photograph of a mushroom cloud over Europe.

China has becoming increasingly irate over the United States’ growing presence in the East China Sea and recently retaliated by sailing a surveillance ship through Hawaiian waters for the very first time in an unprecedented and provocative move.