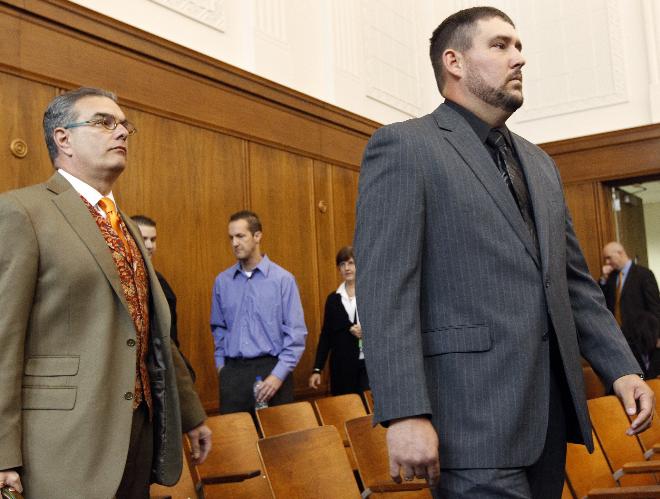 What do you think would happen if a criminal went around sticking his finger into the orifices of unwilling people?  Dozens and dozens of unwilling people?  What if he colluded with partners who held the victims down and threatened them with guns to their heads?  What kind of punishment would you expect such a criminal (and his accomplices) to receive? Would you consider such an assault to be rape, since non-consensual penetration occurred?

It’s worth noting that the US Department of Justice defines rape as:

“The penetration, no matter how slight, of the vagina or anus with any body part or object, or oral penetration by a sex organ of another person, without the consent of the victim.”

Despite dozens of victims who came forth, Milwaukee police officer Michael Vagnini got the extraordinarily light sentence of only two years in prison, despite the fact that he was charged with sexual assault (not rape???) which could have carried a maximum penalty of 25 years in prison and 15 years on supervision.

Between 2010-2012, a gang of uniformed thugs in the Milwaukee PD played the fun game of demanding that “suspects” produce drugs, and then forcibly performing road side cavity searches on them, in some cases causing rectal bleeding.  All of the victims who have come forward publicly are men, as are all of the officers involved.

The searches, by the way, were absolutely illegal. According to a report from The Free Thought Project: “Wisconsin law prohibits police officers from ever being involved in body cavity searches, regardless of probable cause.  This kind of abuse is delegated to professionals like doctors and nurses, according to Wisconsin Statute § 968.255 (3).  And they may be only performed after a search warrant has been obtained.” 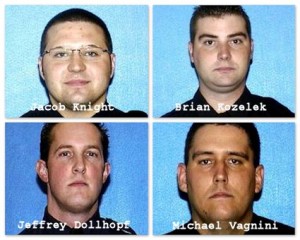 Horrifyingly, the complaints piled up for two years…and the police chief, Ed Flynn, was aware of it. “At the time, Flynn said the department had been aware of complaints about potentially illegal searches for “a couple of years,” but waited to investigate until authorities recognized a pattern.” (source) One complainant said that he came forth as early as 2008, but was ignored.  Finally, in October of 2012, those dedicated to serving-and-protecting Milwaukee decided that there was enough evidence to bring charges against the gang rapists they had employed.

The Free Thought Project  was able to find numerous stories of the shocking abuse:

In one case, a man had gone to check on his aunt’s house in the 3500 block of N. 10th St. When he came outside, his vehicle was surrounded by squad cars. Vagnini put his bare hand down the man’s pants, touched his scrotum and inserted fingers into his anus, the complaint says. When the man pulled away, Vagnini put him in a choke hold that caused him to slobber onto Vagnini’s arm. Vagnini repeatedly told him to “stop resisting” as he pulled back so hard on his neck his feet almost left the ground, the man said. Two other officers held his arms and one put a gun to his head, the complaint says.

Vagnini claimed he found crack cocaine inside the man’s anus, but the man insisted it “was not on him prior to the search,” the complaint says.

Another complaint describes a man being fingered so forcefully that his anus bled.  From JSonline:

And the stories kept coming forward.

Robert Mann, 55, contends that Police Officer Michael Vagnini stopped him as he was walking near N. 31st St. and Atkinson Ave. in June 2011 and without probable cause, pulled down Mann’s pants and put his hand in Mann’s rectum “in an unsafe, unhygienic, and intentionally humiliating fashion.”  No drugs were recovered from Mann.

[A] juvenile, identified as K.F., was 15 when he was riding in a friend’s car that was stopped by police on N. 26th St. in December 2011.  According to the suit, he was ordered out of the car before Vagnini reached into the teen’s pants, touching his genitalia and his anus while Police Officer Jacob Knight watched.

The Milwaukee Journal Sentinel analyzed the cases of at least 13 victims as of August 2013.

Keon Canada was pulled over five times during the summer of 2011 and subjected to butt-cheek searches four times, and that officers opened the front of his pants another time. No drugs were found during any of the stops.

Someone identified only as M.C. claims he was stopped and illegally searched three times in 24 hours during the summer of 2011. No drugs were found.  In December 2011 and January 2012, M.C. contends he was again stopped by Vagnini and other officers and on both occasions was struck in the face by Vagnini before being pulled out of a car, held on the ground and subjected to a forceful penetration of his anus.

James Ashford claims he was subjected to six illegal searches over a six month period starting in the summer of 2011. At one point, he, his mother and other relatives met with a District Five lieutenant to complain that Ashford was being harassed.  According to the lawsuit, the lieutenant told Ashford he should stay out of certain neighborhoods, and never acknowledged that the officers’ actions, including the warrant-less, public rectal searches, were inappropriate, or that the officers would be investigated.  (source)

And cops wonder why the citizens no longer trust them?

Not only were the people involved in these assaults guilty of heinous abuses of authority, but those in charge who knew about them and did nothing are equally guilty, if not more so, because they accepted this type of behavior and allowed it to continue.

If the punishment is to truly fit the crime, we can only hope that Vagnini will spend his meager two years with a very friendly and affectionate cellmate.