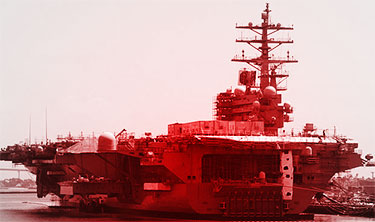 EcoWatch is reporting that 71 U.S. Navy sailors, many only in their 20s, who responded to the Fukushima earthquake and destruction at TEPCO’s Daiichi nuclear power plant have come down with radiation poisoning and cancers after water from the wrecked plant contaminated the USS Ronald Reagan’s supply during disaster efforts:

The water contaminated the ship’s supply, which led to crew members drinking, washing their bodies and brushing their teeth with contaminated water. Paul Garner, an attorney representing 51 sailors, said at least half of the 70-plus sailors have some form of cancer.

Although the Reagan was equipped with a multimillion-dollar radiation-detection system, it was reportedly not activated in time. Radiation levels aboard the ship were measured at 300 times over the prescribed safety limit.

Meanwhile sailors like Lindsay Cooper have contrasted their initial and subsequent feelings upon seeing and tasting metallic “radioactive snow” caused by freezing Pacific air that mixed with radioactive debris.

“We joked about it: ‘Hey, it’s radioactive snow!” Cooper said. “My thyroid is so out of whack that I can lose 60 to 70 pounds in one month and then gain it back the next. My menstrual cycle lasts for six months at a time, and I cannot get pregnant. It’s ruined me.”

Meanwhile, the Daiichi plant continues to leak irradiated groundwater into the Pacific Ocean at a rate of some 400 tons a day. TEPCO, and by extension the Japanese government which owns nearly three-quarters of it, asserts that the contaminated water remains in an area of 0.3 square kilometers within the bay fronting the atomic station, so it isn’t anything for the rest of the world to really worry about.