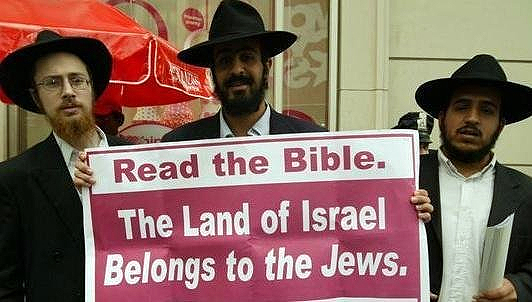 Last year when we had a chance to remove Barack HUSSEIN Obama from office the leaders (like Robert Jeffress) of  ‘certain factions’ of American Christians…the ones who bought into the Chislam nonsense…told their followers NOT to vote for Mitt Romney because he was a Mormon.  “Better a muslim that we know than a Mormon we don’t know” they said.

And a faction of American Jews did NOT vote for Romney either even knowing of his strong support for Israel and his close friendship with Benjamin Netanyahu…NOT because Romney was a Mormon but because they wanted to show how ‘modern’ and tolerant they were by voting for America’s ‘supposedly’ first black president.

Well I hope both groups are happy now for NOT only has Obama taken our beloved America down the wrong path trampling and mocking our Constitution and America’s Judeo-Christian roots and beliefs as he goes, but now he’s going even further by trying to force Israel to turn over half of Jerusalem, the Wailing Wall, The Temple Mount, Old Jerusalem, and the Tomb of Jesus Christ to terrorists…to Hamas…the very same Hamas aligned with the Muslim Brotherhood and the so-called ‘Palestinians’…the very same Muslim Brotherhood that Barack HUSSEIN Obama has allowed into our halls of government.

And as Obama lays the groundwork for NOT only Israel’s destruction as a Jewish state but also for the destruction of the heart of Christianity…where are those Christian and Jewish voices…where is their outrage at America’s first ‘supposedly’ black president who is ‘better than a Mormon’ who now wants to hand over Christian and Jewish holy sites to muslim terrorists.

And what of the American Jews who continue to support the very man who has stabbed the prime minister of Israel and Israeli people in the back time and again…the man who is plotting the destruction of the land they claim to so love…for they too remain silent.

And where are the news reports on Obama’s farce of a peace plan.  We might get a bit here and there on FOX but even FOX dares NOT report too much.  And those in Obama’s orbit mistakenly believe that by giving these jihadists (for that is what they are) more land peace will result, and yet they fail to see or just do NOT care to see that the more land taken away from the sliver of a country that is Israel tightens the noose around their neck even more. Remember, Israel was forced by the international community to give back land captured in the ’67 War (the Gaza Strip and West Bank to the so-called ‘Palestinians’ and the Sinai Peninsula back to Egypt) to appease the very ones trying to destroy them.  And remember also that NO other nation in modern times has been forced to give up the ‘spoils of war’ like Israel has had to do…anti-Semitism rearing its ugly head for sure.

And sadly, like the so-called ‘moderate muslim’ silence after 9/11, the silence of certain Christians and Jews appears on face value to be condoning Obama’s plans for if one does NOT condemn …one condones.

And while I have written about the Obama ‘anything but a peace plan’ before it bears revisiting as Obama has instructed Secretary of State John ‘Swiftboat’ Kerry to get a framework for a deal in place and signed by the end of January…NO matter the voices who oppose it.

Obama’s ‘peace plan’ is simply the same old NOT acceptable demands that regurgitate that Israel return to its now indefensible pre’67 borders (leaving Israel only eight miles wide in certain areas making it easily overrun) as the first step towards a future Palestinian state in return for Palestinian recognition of Israel as the state of the Jewish people.

But Palestinian recognition of Israel as the Jewish state is a non-issue and is just a set-up by Obama and friends to destroy Israel for when Israel was legally set-up by the UN in 1948 as the Jewish homeland…when Palestine officially became the ‘State of Israel’… when every nation in the world recognized it to be so by international agreements.  And the first time Arab nations signed a treaty with Israel, they recognized this fact, this ‘right of recognition.’ And most Arab nations have at one time or another signed some sort of agreement with Israel, even just trade or prisoner exchange agreements.

So Obama’s supposed peace plan actually has NO legal legs to stand on and I’m sure Netanyahu knows this and will use this against him.

And while we know the Holy Bible gives Israel to the Jews, the (un)holy qur’an does so as well.

In fact, the qur’an has God ordering the Jews into Israel in Sura 5:20-21 led in by Sura 5:20 Recalling that Moses said to his people (the Jews), “O my people, remember GOD’s blessings upon you: He appointed prophets from among you, made you kings, and granted you what He never granted any other people.” And this means a homeland.

[5:21] “O my people, enter the holy land (Israel) that GOD has decreed for you, and do not rebel, lest you become losers.”

And if there are still any doubters as to whether the qur’an speaks about the Jews’ right to live forever in the land of Israel, see Sura 10:93-94: “We settled the Children of Israel in a beautiful dwelling-place.….If thou wert in doubt as to what We have revealed unto thee, then ask those who have been reading the Book from before thee.” Meaning the Bible.

And lastly, the qur’an 5:20-21 states, “And [remember] when Moses said to his people: ‘O my people, call in remembrance the favor of God unto you, when he produced prophets among you, made you kings, and gave to you what He had not given to any other among the peoples. O my people, enter the Holy Land which God has assigned unto you, and turn not back ignominiously, for then will ye be overthrown, to your own ruin.'”

And whether Barack HUSSEIN Obama likes it or NOT the Jewish people and the Christians who support them will NEVER turn their backs on Israel…the land God Almighty gave to them…the land the (un)holy qur’an also says is theirs.

And ‘good’ muslims (like Obama) will ignore the verses they don’t like and replace them with the tenets of taqiyya if it serves their ultimate goal of removing both the Jews and the Christians from the Holy Land and destroying every vestige that they were ever there.  And certain Christians and Jews here in America know this yet their silence remains deafening…and that is the saddest thing of all.