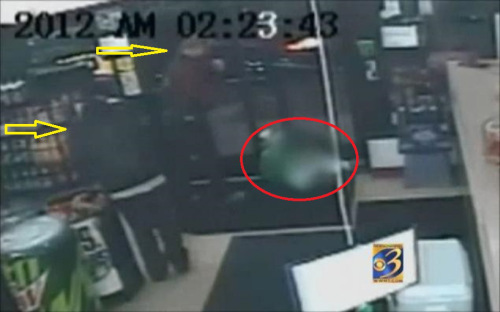 Is this what America has become?

A country where people have become so callous and devoid of the sentiments that make us human — those of empathy and compassion — as to casually step over the body of a murdered man, without so much as lift a finger to help?

That’s what customers in a convenience store in Kalamazoo, Michigan, did.

For FIVE MINUTES after a young man had been shot and collapsed in the store’s doorway, customers casually walked past the body, without stopping to help or even call 911. The store clerk also acted like nothing had happened, and continued to serve the customers.

The pic below is a screenshot from the store’s surveillance video. I’ve painted a red circle around the body, and yellow arrows pointing to two customers.

The mother of a Michigan man shot and killed in front of a Michigan store was outraged to learn that customers continued to walk over his body for about five minutes before anyone called for help.

Jackel Wright told WWMT-TV that she recently learned of footage from a security camera inside the Quick Stop store in Kalamazoo that shows the moment her son, Jheryl Wright, was gunned down as he walked out the door in September 2012.

But after the 24-year-old man collapsed, several customers continued to walk in and out of the store — stepping over the wounded man’s body to get through the door.

“When they told me people were still coming in that gas station, stepping over my child in the doorway, I couldn’t believe it,” the teary-eyed mother told the news station. “I just can’t believe people in this world would do something like that. I can’t.”

The shocking clip — which was released during the trial of Clarence Ross, who was convicted last week of Wright’s murder — also shows the clerk continue to deal with customers even after he glances down at Wright’s body.

“How can you step over someone laying in the doorway and not help?” Jackel Wright said. “How would they feel if that was one of their loved ones sitting there?”

Wright’s body was sprawled on the floor for about five minutes until a customer finally realized something was terribly wrong and called 911 on his cellphone.

The victim’s mother said she has only been told about the video, because she’s too distraught to watch it herself. But she said she’d like to find out the identities of every person who was in the store when her son was killed.

“I hope God have mercy on your soul, because you was wrong sitting there and not helping my son, like he was just a doormat — walking over him, laying there dead,” she said. “I hope you all can’t sleep at night, because that was awful, just plain awful.”

Ross, 32, was found guilty of open murder, solicitation of murder and felony use of a firearm. He was slated to be sentenced on Jan. 13.