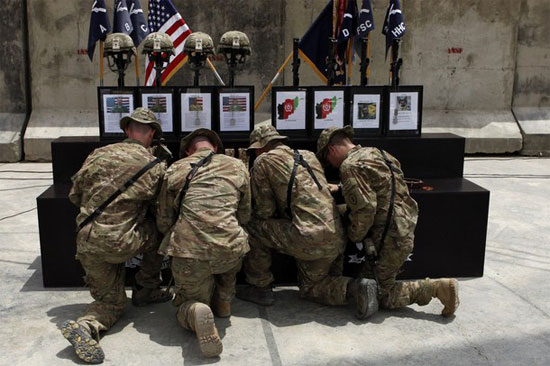 And it seems they all died in vain…or did they?

‘Shock and awe’…well served and with good intentions…a war that freed Iraq from the clutches of a brutal dictator and gave the Iraqi people a chance at an independent, free, and sovereign nation…a chance that Barack HUSSEIN Obama‘s deliberately misguided actions have taken away from them…taken away from them at the cost of American lives.

And with Iraq’s (Shi’ite) Prime Minister Nouri al-Maliki now facing political unrest as 44 members of Iraq’s parliament resigned due to government forces breaking-up Sunni-led protests, fighters from the al-Qaeda linked group the Islamic State in Iraq and Levanthave completely taken over the city center of Fallujah (where 100 Marines were killed in the 2004 second battle of Fallujah) by seizing military equipment given to Fallujah’s police by US Marines. And with al-Qaeda militants almost in total control of the provincial capital of Ramadi, you have to wonder where did we go wrong and was the cost in American lives and in our taxpayer dollars worth it.

The answer to the first question is easy…Barack HUSSEIN Obama is the sole cause of the war gone horribly wrong…but the second question is a bit harder to answer for many factors come into play as Iraq heads into a civil war of Wahhabi Sunni vs. Shi’ite muslims.

Since the Iraq/Afghan War began on March 3, 2003, and up to about four days ago, 4489 American troops have been killed in the almost 11 years of fighting with two-thirds of those deaths occurring in the almost five years since Barack HUSSEIN Obama usurped…I mean took the oath of office. And more than 51,778 have been wounded, including thousands with serious brain and spinal injuries… including those coming home minus arms and legs…and including those with PTSD being their life after seeing and living the horrors of war.

So as these brave warriors battle DC bureaucracy for what is rightfully theirs, the fact remains that the money spent in tying to assure Iraq’s seemingly now lost freedom could exceed three TRILLION of our taxpayer dollars…three TRILLION dollars for Iraq and a tooth and nail fight for our troops…all courtesy of the Obama administration…all courtesy of a Commander-in-Chief who is anything but.

And buried within those three TRILLION dollars is the millions of dollars that was spent on equipment that sits rotting in fields all over Iraq…and this because Obama would NOT allow our troops to train the Iraqi’s on how to use said equipment for what was of paramount importance for this most vile of men…for this most traitorous of presidents…was announcing to the enemy the date our troops would begin and end their withdrawal, thus assuring them victory if they just bode their time and waited for us to leave…for as we all know America’s enemies are Barack HUSSEIN Obama’s friends on whose side his allegiance always lies.

So as violence escalates throughout Iraq, especially in the al-Anbar province where 2013 saw the most civilian casualties in five years, and as internal security issues worsen, Obama continues to bloviate that ending the Iraq War is one of the main accomplishments of his administration…second only of course to his single handed take down Osama bin-Laden (sarcastically said) NOT caring that what he calls ending a war is actually losing a war due to his having had our troops fight that war as per the tenets of political correctness.

But the question remains was this sacrifice of American lives, American blood, and American limbs worth it. Remember, some have said that this war was all about oil and making the ‘fat cats’ even fatter, so for those who believe that I guess to them it was NOT worth the cost in American lives for the war did NOT affect Iraq’s major oil fields. In fact, Iraq is now pumping even more crude than before the war as it’s increased links to wells in its predominately Shi’ite south.

Also remember that Iraq, as much as the Democrats want it to be, is NOT really George W. Bush’s war for it was Billy-Boy Clinton himself, who in 1998, signed the Iraq Liberation Act, making Saddam Hussein’s removal from power a matter of US policy.

And as much as those on the left claim that Saddam Hussein did NOT have the chemical and biological weapons that were the major selling point for America going to war even though the chemical weapons now in the hands of Syria’s Bashar Assad are the very ones Saddam moved out of Iraq into Syria before the first US troop set foot on Iraqi soil…and even though Bush’s ‘surge’ turned the tide of the war in America’s favor and helped give birth to a fledgling Iraqi democracy… even with all this taking its toll in American lives the war was worth fighting because abandoning what Clinton set in motion…abandoning what Bush accomplished… would have been reckless at best… would have been un-American at worst for what America starts America finishes…Barack HUSSEIN Obama be damned.

But do NOT think for a minute that this war is really over as Iraq stands between Iran and Israel and for that reason alone the Iraq war will NEVER be truly over for America.