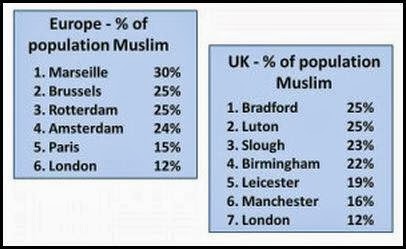 Yesterday I posted this picture and it really got me thinking as there is much truth in these numbers beyond their numerical value, for what these numbers indicate is stealth jihad going on right before our eyes.

Now here’s a scary thought that we Westerners must face…it’s been predicted that if unchecked, by the year 2030, muslims will make up more than one quarter of the world’s projected population of 8.3 billion. One-quarter of this entire planet will be muslim in a mere 15 years or so…8.3 billion people will be muslim when in 2010 there were 1.57 billion muslims…and I cannot stress those numbers enough for if that does NOT scare the hell out of you NOTHING will for those numbers alone will assure them victory over their enemies.

And these simple numbers tell you that in time Israel will easily be overrun as will most of Europe for the ever increasing muslim population continues to grow unchecked, and with those sheer numbers alone they will be able to do what all the wars throughout all of muslim history have failed to do…eradicate the infidels without them needing to lift a finger to do so.

In Great Britain alone, almost one in ten people will be muslim by 2030, because of lax immigration policies (one in four immigrants to Great Britain is currently muslim) and sky high muslim birth rates. And this will translate in less than 15 years into Great Britain…America’s mother country as some like to say…having more muslims than the entire Arab nation of Kuwait. Scary huh…

And at the current rate of muslim immigration combined with their notoriously high birth rates, once secular France…the country who has always shied away from religion in government…will become a muslim majority country within 23 years…complete with prayer rugs in every home, burqas on its women, and a mosque on every corner.

So what of our beloved America…separated by oceans but with a muslim loving if NOT outright muslim president. Our beloved America could see ‘Yankee Doodle Dandy’ replaced by the muslim call to prayer as the number of muslims in America is expected to double within the next 20 years up from today’s 2.6 million to 6.2 million or more.

Talk about the need to seal our borders and seriously limit…if NOT outright halt…muslim immigration into our country. And please do NOT dare call me a racist for thinking this…as some on the left and maybe even some on the right will most assuredly do…for being a muslim is NOT about nationality for anyone, NO matter their race or ethnicity, can become a muslim as all the word ‘muslim’ means is a follower of islam and NOTHING more.

And while these numbers in and of themselves pose a danger to Western culture and society, let’s NOT forget that once a country’s population numbers start to shift in their favor, muslims will begin to ‘legally’ takeover said country’s government by slowly but steadily getting their people elected. And when that happens they will start introducing sharia compliant legislation…which will probably start with removing the penalties for ‘honor killings’ and mandating that burqa ‘garbage bags’ become the rule of dress for all women.

And while we as Americans can do NOTHING to stop the muslim immigration into the European countries, we sure as hell can stop it here. With the vast majority of Americans rightfully having an unfavorable view of both islam and muslims…as they simply do NOT fit into the fabric of our American society…it’s way past time to understand the whys…and the whys do indeed go back to the word ‘religion’ and the practices that word encompasses.

The right to freedom of religion was indeed a basis for the founding of our country. But freedom to practice one’s religion does NOT mean the freedom to have some in power force ‘We the People’ to accept a barbaric perverted cult nor does it mean that we must comply to that said cult when it goes against the very founding of our country as a Judeo-Christian nation. In fact, it means that we as Americans must do any and everything in our power to rid our country of any and all dangers put upon it, even if that means stopping and turning back those who practice said cult from ever reaching our shores.

Remember, islam is NOT a religion but is a political system that hides behind the guise of calling itself a religion…a political cult and NOTHING more. So by denying immigration status to those from muslim countries, we are NOT discriminating against those who practice a certain religion…which would be against our Constitution…but we are stopping them from coming here because what they practice is NOT a religion but is a political ideology based on the mindset of terrorism as a legitimate answer to any perceived problems and that is NOT acceptable in America…period.

Religion…legitimate recognized religion here in America is based upon a set of beliefs, values, morals, ideals, and practices following the teachings of God the Father, Jesus the Son, and the Abrahamic God of the Jews…in other words religion in America is based upon the one true living and loving God of the Christians and Jews. Religion in America is NOT based upon the rantings of a delusional madman who expounded jihad…just another name for terrorism by the way…and wrote down in his anything but a holy book…the qur’an…at least 109 verses that call for muslims to ‘war with nonbelievers for the sake of Islamic rule’…verses that are part of the eternal, unchanging, unforgiving word of the false god allah.

So sealing our borders to muslim immigrants is in NO way discriminating against them for their belief in islam, but is stopping them from entering or country because by their very following of islam as laid down in the qur’an they are sworn and commanded to kill all those who do NOT believe as they do…meaning almost all of the American people.

And last time I checked killers were denied access to our country.

And even if all I have said is still NOT enough for you to understand why muslim immigration into America must be stopped then how about this…just the fact that the qur’an states that there shall be NO law higher than sharia law, and with the Constitution being the law of our land, that alone should be enough to make anybody see that islam and its muslim followers are simply the diametrical opposite of what is compatible with our American way of life.

And to those who spout the ‘coexist’ nonsense…and to those who tried to blend Christianity and islam into the kumbaya, touchy-feely abomination known as Chislam…I say wake-up…for God’s sake please wake-up for we CANNOT coexist in peace with people commanded by their (un)holy book to kill us all. Coexist is NOTHING but taqiyya in action, and if we as Americans dare to fall for that then indeed all will be lost.

So seal the borders to all muslim immigration and seal them now before our beloved America becomes just like Europe but on a larger scale. 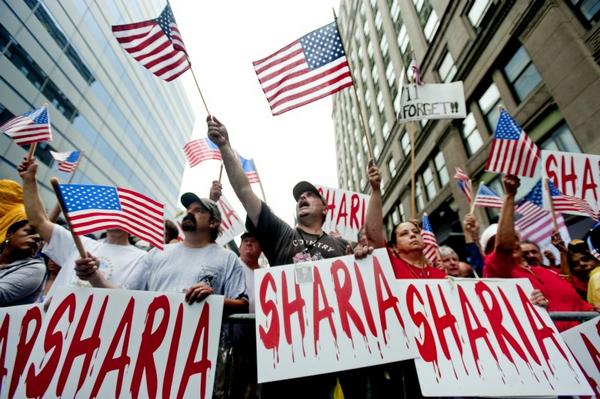