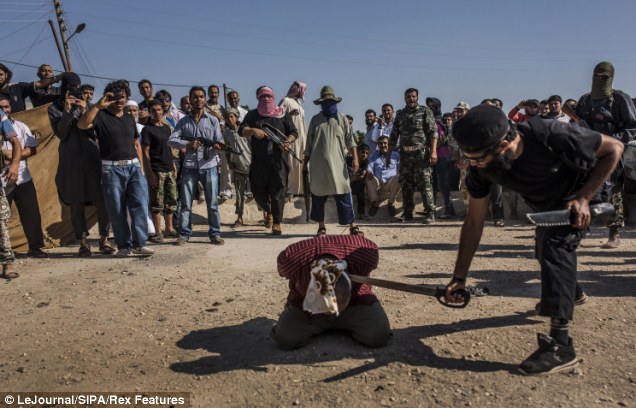 The Obama Administration openly supported Al-Qaeda linked Syrian Islamic rebels against the forces of Bashir al-Assad. In doing so, the Obama Administration has the blood of all Syrian Christians on their hands. Stories are now coming out about the atrocities inflicted upon Syrian Christians by the rebel forces. Syrian Islamic rebels continue to prove that they are monstrous creations of Allah. They’re not human, they’re animals. Methodically draining the blood of beheaded Christians, they’re selling their blood to use in an “atonement ritual.”

Syrian jihadists are actually draining the blood of their Christian victims and selling it for profit. As if beheading their victims wasn’t bad enough, they’re slicing the heads in such a way as to preserve the blood. The severing of the neck has to be done just right to get the required amount of blood. This further proves there is nothing too grotesque for Islam. Jerome Corsi of WorldNetDaily interviewed a Syrian nun about the atrocites committed by the Syrian Islamic rebels.

Sister Hatune Dogan told WND in a Skype interview that members of the Syrian opposition are draining the blood of Christians they behead and selling vials to Islamic radicals for $100,000 a piece.

The Syrian Orthodox nun explained that the blood is used in a ritual washing of hands in the belief the act atones for sins and provides privileged access to heaven.

Not only are the Islamic rebels bottling the blood for “atonement” they’re using the money to buy more weapons. This is big business for the Syrian Islamic rebels. Somehow Christian blood is “holy” blood and marketed as an atonement for Islamic sins. It is killing the infidels in the way Allah commands.

The Christians, she said, are beheaded in ceremonies in which they are forced to kneel, with their hands and feet bound as the Muslim radicals read a death sentence imposed because the victim refuses to renounce Christianity and embrace Islam.

She detailed how the head of the victim is brutally severed with knives. The blood spurting from their necks is captured in basins and then bottled.

“The Muslims sever the necks and collect the blood in vessels to sell the blood. The Muslims believe that if they kill a Christian and wash their hands in the blood of the Christian, they will go to heaven” she explained.

Is there no form of torture that is too much for Islamists? To actually bottle and sell the blood of Christians beheaded is horrifically brutal. Islam is blood, murder, and sadism. The torture that these Christians endure before they are killed is enough. The rape, beatings, and then lastly, the beheading of those who refuse to renounce their Christian faith. Somehow this is a holy sacrifice to Allah, the blood of a murdered infidel.

“With this money, the Muslim terrorists can buy more weapons,” she explained.

Walid Shoebat, a native Arabic-speaking Christian who was a member of the PLO, has called Hatune a Mother Teresa figure in an article that featured her presenting the results of an independent investigation of Christians in Syria under the rule of Muslim fundamentalists.

Sister Hatune is one of the brave souls willing to stand up to Islamic atrocities, not just Syrian Islamic rebels, but across the Middle East. The war between Islam and Christians has reached a fever pitch. In America, it seems unimaginable. It is nothing short of impossible to imagine the horrors that Christians face daily at the hands of Islamists, who are becoming more pathologically single-minded in their murderous ways.

WND Middle East correspondent Michael Maloof , a former senior security policy analyst in the office of the secretary of defense, said the “vociferous wrath” from jihadists that Hatune is receiving because of her vigorous effort to protect Christians has made her a prime target of al-Qaida and its affiliate, the Jabhat al-Nusra.

“Al-Nusra, which wants to establish caliphates in Syria and throughout the Middle East, has amply demonstrated that it will kill any ‘infidel,’ even Muslims, who do not subscribe to a strict form of Shariah,” Maloof said. “This places all Christians and other minorities in peril which, in turn, puts Sister Hatune and her companions in al-Nusra’s crosshairs.”

The war for supremacy will continue and until there is no more blood to shed. Sunni vs. Shi’a, with any other “minority” not in line with Al-Nusra will die at their hands. Christians will continue to be martyred for their faith. Sister Hatune is speaking up for the Christians in peril. Thus she will surely be targeted in the most vicious way possible. There is no safe haven. As she said, she faces “18 death threats in seven languages.” Christians in Syria and across the Middle East have been put in greater peril by the Obama Administration, who backs the murderous rebels at the expense of Syrian Christians. With this, Al Qaeda has only grown in strength and numbers, and the possibility of a Syrian and full Middle Eastern caliphate has become a definite possibility. Israel, truly is the region’s only hope.