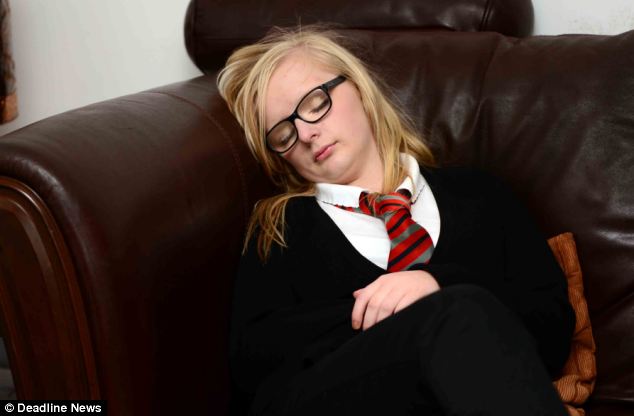 Before you line your kids up to have this year’s flu vaccine sprayed up their noses or injected into their arms, consider the fact that in Europe, children developed incurable debilitating narcolepsy after receiving injections from a drug developed by GlaxoSmithKline (GSK). But it’s okay – they have created a miracle treatment that costs the child’s family only a bit over $20,000 per year…forever.

More than 800 children across Europe have been diagnosed with this lifelong neurological disorder and the evidence is overwhelming in the implication of the vaccine.  (source)

And this part may sound familiar to those of us in North America: the kids received the vaccine after sweeping propaganda promotions by national health organizations, the main stream news, schools, workplaces, and TV commercials that to encouraged everyone to ‘do the right thing’ and get the injection.

Narcolepsy occurs after the death of the neurons that produce hormones that keeps people awake. The most likely culprit in the swine flu vaccine is squalene, which is used as an adjuvant. (source)

The most recent case to come to light in the mainstream media (waaaaaaay down at the bottom of the page) is that of teenager Chloe Glasson, of Fife, Scotland, who falls asleep uncontrollably up to 30 times each day.

It was supposed to be a simple vaccine against swine flu, but since she had it, Chloe Glasson’s life has been like a bad dream.

Just four months after being given the Pandemrix injection, the 15-year-old schoolgirl developed the sleeping disorder narcolepsy.

Now, without warning, she falls asleep up to 30 times a day wherever she is.

Naturally, this has made her life at school challenging, as she often drops off in class. But it is also potentially dangerous.

Chloe recently went missing for two hours after going into a “dreamlike autopilot” state while making a short journey to her grandmother’s house. She eventually found her own way home safely, but not before her terrified family had contacted police, amid fears of what might have happened to her. (source)

The reason Chloe’s story made news, though, is not to warn people of the damage caused to her by the vaccine. Instead, it is to praise the launch of a new Big Pharma “miracle cure” to fix the Big Pharma disaster that caused her life-long disability. The drug, which is experimental, costs over $20,000 per year and is Chloe’s only chance at living a normal life.

So, just to be sure this is perfectly clear,  Big Pharma causes lifelong, permanently debilitating damage, and then fixes it at a ridiculously hefty profit.

If Chloe and the other 800 kids so affected all took this drug, and each lived another 30 years, that, by my rough calculations, is a mindblowing $480,000,000…just from these cases that we know about.

The children affected in the UK are eligible to receive a maximum payout of about $220,000 from the government. That’s it – all they get for a lifelong disability that makes them unable to drive or perform most jobs or get an education.  And they still must find a way pay for the outrageously expensive drugs.

Last year, I wrote about a young girl from Sweden, whose life was changed forever in the amount of time it took to be jabbed by a needle.

One young girl, Emelie Olsson, has had her life forever devastated as a result of narcolepsy, the onset of which occurred after receiving the swine flu vaccine in 2009.

The 14 year old girl has had her life devastated.

She cannot sleep at night. When she does sleep, she is plagued with nightmares and hallucinations, sometimes waking more than 70 times in the night.

Sometimes when she wakens she is completely paralyzed and unable to breathe well or call out for help.

During the day, she can hardly keep her eyes open because of the lack of sleep.

If she laughs she has something called a cataplexy – when a strong emotion causes sudden muscle weakness that leaves her unable to stand.  When Emelie tries to have fun with friends, the happiness, literally, causes her to collapse to the ground.   ”I can’t laugh or joke about with my friends anymore, because when I do I get cataplexies and collapse,” she said in an interview. “I can not laugh anymore and it makes me very, very sad. It is the worst of all.”

Can you honestly imagine, as a parent, an adult or a human being, having to warn a child – “Stop that!  Don’t laugh!!!!”

But Emelie’s mother has to do just that.  In an interview, Marie Olsson expressed terrible guilt and regret.  (translated from Swedish) “Yes, I feel guilty. We are parents supposed to protect our children and instead I have asked Emelie take this vaccination, which has made her so sick. If I had read on better and questioned more then maybe she had not been vaccinated themselves. Before then, Emelie had been healthy.”

Emelie, age 14,  must now take stimulants during the day, narcotic sleep aids at night and medications that stabilise her emotions so that she can feel neither sadness or joy. She must take these medications for the rest of her life.

Emelie’s struggle is outlined in the documentary “After the Syringe.”

Some people may say, “Oh, that was an experimental drug, rushed to market to fight an epidemic.”

The thing is, if you look at it that way, every flu vaccine is “experimental”.  Each year’s batch contains something different, because it has to be ever-evolving as viruses mutate. Despite this, people are terrified and guilted into receiving the vaccine. If the fear factor doesn’t work, they are forced to take it in order to work, go to school, or stay at daycare.

Is the risk of the flu greater than the risk from the vaccines? One public health official in Sweden regrets his part in pushing the vaccine and has actually gone on the record to say so.  Goran Stiernstedt, the director for health and social care at the Swedish Association of Local Authorities and Regions, was at the helm of the vaccination campaign across Sweden.  He estimates the vaccine may have saved the lives of 30-60 people, but now over 200 recipients in that country suffer from narcolepsy. (source)

Please, don’t allow yourself to be persuaded by those who only have the best interests of Big Pharma at heart, instead of the best interests of your family.  Do your own research and make your decision based on that. Study the cautionary tales. Every drug ever rolled out by Big Pharma sounded like a great idea at the time, but the deaths and permanent disabilities caused by many of them should make you think twice before blithely having yourself or your family members injected.