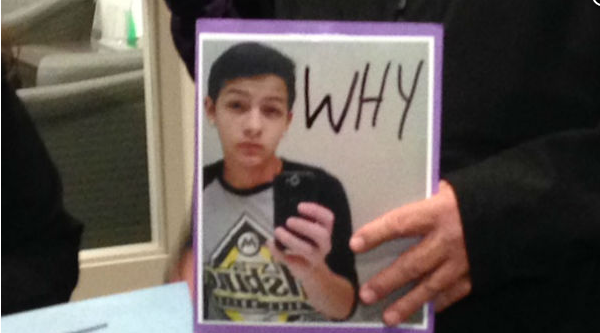 A North Carolina family is mourning the loss of their 18 year old son after he was shot and killed by a police officer.

Mark Wilsey called 911 for police assistance with his son Keith, who was having a schizophrenic incident and threatened his mother with a small screwdriver.

Wilsey said two police officers showed up and were able to subdue Keith, but the arrival of a third officer caused the teen to become agitated, and the officers used a Taser on him.

Wilsey told WECT that officers had his son down on the ground after the teen was tased a few times and an officer said, “We don’t have time for this.”

That’s when Wilsey says one of the officers stepped between the two who were holding Keith down and fired, killing his son:

Both parents said they had to watch their son die in front of them. They said Keith had just turned 18 years old and only weighed about 90 pounds.

Keith’s mother said she could not understand what happened:

“Where is the justice, why did they shoot my son?,” she asked. “This is what’s wrong with our mental health system.”

Keith’s parents said the screwdriver was tiny and the teen wouldn’t have hurt anyone. Neighbors said Keith played with their children and he never was violent. He had a history of depression and schizophrenia, but he was never harmful to others.

His mother said she tried multiple times to get Keith help for his mental illness. Emergency services treated her for a breakdown at the scene.

At least one detective from the Southport Police Department is on paid administrative leave for his involvement in the incident.

This is just another tragic example of a call for help from the people who are supposed to “serve and protect” turning deadly.