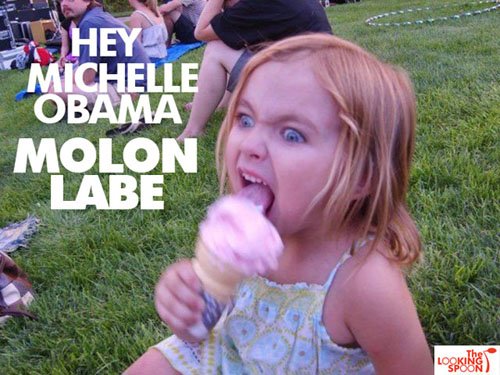 Remember the horrible starvation diet version of school lunches that Michelle Obama tried to mandate to help fix the obesity crisis among kids?

Well, the USDA, who is in charge of the federal lunch program, has finally waved the white flag of surrender and given up trying to enforce them.

Back in 2012, The Daily Sheeple reported on the miserly portions served to starving students across the nation:

Michelle Obama championed the federal Healthy, Hunger-Free Kids Act as part of her Let’s Move campaign.  The act has been put into place to combat childhood obesity but it’s leaving a lot of kids…well…HUNGRY.

School lunches have undergone such a drastic transformation that students across the country are complaining of hunger pangs throughout the day.  Portion sizes have been reduced, dessert and flavored milks have been banned, and, in the name of financial easing, the prices of these smaller lunches have been increased.

USDA Deputy Undersecretary Janey Thornton blames the kids for the reported hunger pangs. ”One thing I think we need to keep in mind as kids say they’re still hungry is that many children aren’t used to eating fruits and vegetables at home, much less at school. So it’s a change in what they are eating. If they are still hungry, it’s that they are not eating all the food that’s being offered.”

The kids are fighting back.  Student athletes across the country are complaining that their caloric needs are not being met by the enforced diet.  No adjustments are being made based on energy output – the food offerings are the same across the board.  Kids report only drinking the milk and throwing out the plates of hummus and black bean salad in revolt, according to a student in South Dakota. Serving sizes are only slightly adjusted by the age of the kids – the new rulebook sets calorie maximums for school lunches — 650 calories for elementary-schoolers, 700 for middle-schoolers and 850 for high-schoolers. (source)

After a two year assault of complaints from parents, school staff, and students, it became clear that the First Lady was “out to lunch” when it came to satisfying hungry schoolchildren. The USDA has finally agreed to relent and let the incongruously named Healthy Hunger-Free Kids Act of 2010 (teehee) die. Cafeterias will now increase the “rations” allowed to students, quelling hungry tummies everywhere.

Senator John Hoeven of North Dakota and Senator Mark Pryor of Arkansas announced Friday, that the U.S. Department of Agriculture had agreed to  loosen those requirements to the National School Lunch and Breakfast Program.

“Today, the USDA made the permanent changes we have been seeking to the School Lunch Program,” Hoeven said. “A one-size-fits-all approach to school lunch left students hungry and school districts frustrated with the additional expense, paperwork and nutritional research necessary to meet federal requirements. These are exactly the changes included in our Sensible School Lunch Act.”

“After hearing from educators, parents, and students, Senator Hoeven and I stepped in to help school districts who were frustrated with the National School Lunch and Breakfast Program’s strict new rules,” Pryor said. “I’m glad the USDA followed our lead and made these much-needed administrative changes that will give our school districts the permanent flexibility they need to keep our kids healthy and successful.”

Some people suggested that parents just send lunches if they weren’t happy with what the school was providing. However, in a country where the Department of Health and Human Services has been known to inspect children’s lunchboxes, since we as parents clearly have no idea what our kids should eat, it is a little more difficult. In some schools, where the lunchroom supervisors also seem to serve as enforcers, supplementing kids’ lunches according to ridiculous guidelines, and in others, where you aren’t even allowed to send a lunch unless you have a doctor’s note, it just isn’t that easy to resist the First Lady’s attempt to nutritionally dictate and attempt to churn out a bunch of trim little students.

For now, at least, starving students will be a little less hungry.