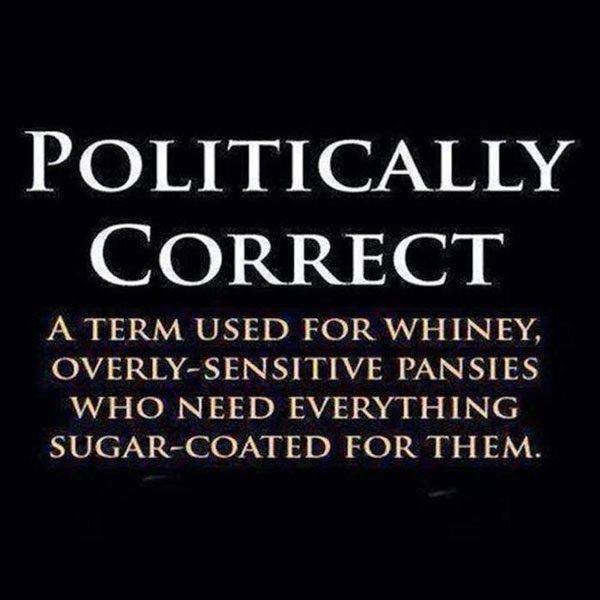 I saw this meme/pic on Facebook today that said “POLITICALLY CORRECT: A term used for whiney, overly-sensitive pansies who need everything sugar-coated for them.”

Dr. Ben Carson said it a little less bluntly in his speech at the 2013 Prayer Breakfast, but I shared the pic because I agree. The bottom line is we have to stop hiding behind “I don’t want to offend anyone” and start speaking our minds.

If you have have something to say, ask yourself this. Is what I’m about to say deliberately intended to offend? If you’re intentionally trying to offend someone, then ok, keep your mouth shut because your intent is to cause harm and do no good.

However, if you have something to say because it’s what you truly believe…it’s who you are…it defines you THEN SAY IT. Don’t be a jerk about it, but stop stop walking around on egg shells being a shell of yourself. Why are you worried about offending someone who’s only concern is their own feelings because they are too immature to respect the fact that you have a right to think, feel and say what you want according to your own beliefs and values.

Now I also understand that there are some very vial and ugly things that people can say…hate speech, racial slurs, threats, vulgarity. I get that. You have to get over it. It is a constitutional right to say what you want. I hate that the KKK still walks the streets of my town, not in white robes and hoods anymore, but with their little logos on polo shirts and Tshirts. I hate it, but it’s their right to do so. And while its easy to say we should silence this or silence that…once you start silencing one person or one group, where does it stop? Either everyone is free or no one is really free.

Remember, sticks and stones may break my bones, but words can never hurt me. Words only have power over you if you let them and there will always be those that try to hurt you with their words. Rise above the hate. Speak honestly and from your heart and let others disagree with you. Live true to what you believe and allow others to do the same. Be respectful and lead by example. Agree to disagree.

Agree to disagree. This is the way a constitutional republic works. It protects the rights of all and protects them equally. In a democracy, the majority rules and the rights of others are lost. Which would you rather have? Think before you answer. Maybe you’d rather silence those that don’t agree with you. But what if one day you’re no longer in the majority and now you’re the one they want silenced? America was founded as a constitutional republic but is now being run like a democracy. Better decide the answer to that question now. I for one want my republic back and I will not be politically correct about it.

Amy Grabowski is a 16 year Air Force veteran and a Catholic Conservative originally from North Canton, Ohio who now hails from Rising Sun, MD.  She can be reached at [email protected] or at http://patriotsforamerica.ning.com/ under the handle Patriot Mom.