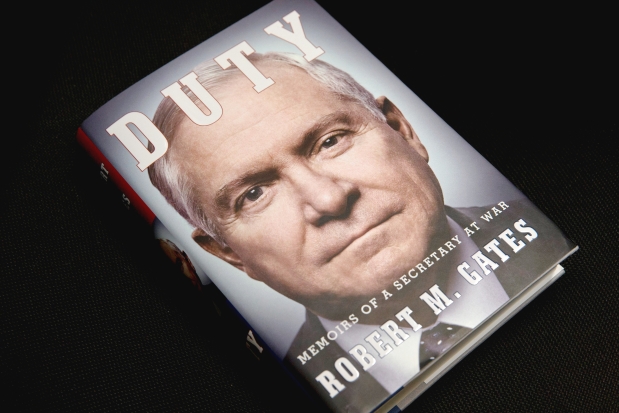 Reverberating throughout Washington, as well it should, ex-Defense Secretary Robert Gates is blowing the lid on the Obama administration’s total disasters in the foreign policy arena…including the unthinkable that all his war decisions…all his decisions regarding our troops…were based upon political expediency benefiting him alone and NOT on the concept of victory.

Robert Gates worked for every president since Richard Nixon, with the exception of Bill Clinton, and served as Defense Secretary for two years under Barack HUSSEIN Obama. Now he has come forward in his soon to be released book, ‘Duty: Memoirs of a Secretary at War,’ to criticize Obama’s approach to a number of key defense-related issues, paramount of which is his distrust of our military hierarchy and indirectly his tried to hide disdain for our troops themselves.

In criticizing Obama, especially in relation to his Afghan policies, Gates alludes to something that a president in his position as Commander-in-Chief must NEVER do…a Commander-in-Chief must NEVER have doubts about the mission at hand nor about the officers on the ground NOT getting the job they were sent to do done, because if he does the troops actually fighting…the troops putting their lives on the line can sense it…can sense the defeatist attitude…can sense the betrayal by the very man who should have total unquestioned faith in them.

For example, in Gates’ exposing that Obama had doubts about committing 30,000 more troops to what became known as ‘the surge’ because he believed the fighting would end in failure… “skeptical if not outright convinced it [the administration strategy] would fail,” were Gates’ words, and to me that is a total breach of military protocol that borders on treason for 30,000 more troops were now being sent to their possible deaths on Obama’s orders…orders that amounted to a lazier-faire attitude of who cares about the troops for Obama, of his own volition, was sending them there destined to fail…destined to die.

And this speaks in hushed tones of something some of us have known for quite some time…Barack HUSSEIN Obama NEVER wanted to win this war for defeating America’s enemies would be defeating his friends. And by his very actions…or lack thereof…our troops have always been able to sense that the very man who is supposed to do all in his power to assure their victory did everything in his power to make sure victory was NOT to be had for Obama, as Commander-in-Chief, had our troops fighting to ‘win the hearts and minds’ of the enemy instead of fighting to win.

Obama’s lack of commitment to win the war in Afghanistan along with his distrust and ignoring of what the ranking military officers on the ground advised him to do or NOT do are serious breaches of conduct done by a man sending troops into combat. And as Gates said, this speaks volumes that for Obama, “it’s all about getting out” and getting out for political reasons alone…his re-election was coming up the following year…for by dismissing all the advice of the ranking officers and insisted on announcing to the enemy our timetable for withdrawal, “his focus was always on ending the war, not winning it.”

And that dismissing of advice is paramount to Obama’s Afghan and Iraqi failures. In fact, General Petraeus, then the central commander in charge of both the Iraq and Afghanistan theaters and a man Obama had doubts could work with Afghan President Hamid Karzai, made statements to the press that he was NOT at all comfortable with setting a fixed date to start withdrawal. And still Obama did NOT heed his advice, instead choosing to criticize the military…the very military he is Commander-in-Chief of…for “popping off in the press” and said he would push back hard against any delay in beginning the withdrawal.

It was all about him…as usual…with NO concern for the safety for those on the front lines and this was picked up by Gates, who “was deeply uneasy with the Obama White House’s lack of appreciation—from the top down—of the uncertainties and unpredictability of war,” because with Barack HUSSEIN Obama any and everything …every decision made…was made with domestic political calculations in mind…was made based on what would be politically best for him and him alone.

Remember, when Obama ran for president the first time, he bloviated time and again his opposition to the 2003 Iraq invasion and to the fighting in Afghanistan…what he called Bush’s wars. Politically he had to for his primary opponent was ubber liberal Hillary Clinton who admitted in front of Gates that,“her opposition to the [2007] surge in Iraq has been political because she was facing him in the Iowa primary. The president conceded vaguely that his opposition to the Iraq surge had been political. To hear the two of them making these admissions, and in front of me, was as surprising as it was dismaying,” Gates writes.

Surprising and dismaying puts it mildly and shows Hillary to be as vile and self-serving as the man she hopes to succeed as president. 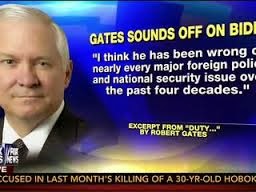 And in his book Gates is also extremely critical of Vice President Joe Biden. “I think he has been wrong on nearly every major foreign policy and national security issue over the past four decades.” And while Gates is right in this assessment the one thing I will give ‘Uncle Joe’ is that I for one do NOT believe he is a traitor to America like both Obama and Hillary are. Remember, Biden’s son even served in the wars.

So while I nor the general public have yet read Robert Gates book I can unequivocally say that for a former defense secretary to fault and criticize… especially in print…a sitting president’s leadership…a sitting president’s attitude about those leading the fight to keep us safe and free at home…speaks volumes about the character of the man whose very actions and attitudes have resulted in so many American deaths now to have been in vain.