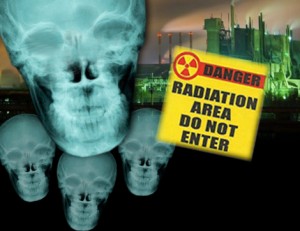 Worldwide there has been a massive increase in cancers of all kinds since 1945.

On Monday July 16th 1945 in Alamogordo, New Mexico the first ever atomic bomb was tested. The bomb was called Trinity, which by definition means three things that are closely conjoined to form one new unit. It’s also the name given to the Christian Godhead: The Father, The Son and The Holy Spirit, but there was nothing holy about this alliance.

The success of the Trinity test allowed progression to the main event, the nuclear bombing of Hiroshima on August 6 1945 and Nagasaki on the August 9th 1945.

16 hours after the Hiroshima bomb run, President Truman addressed the people of the United States, you can read his full speech here.

Nuclear explosions of any kind involve the conversion of atomic mass into energy by one of two processes, nuclear fission, or nuclear fusion.

Fusion is triggered by a fission explosion that then forces tritium or deuterium atoms to combine into larger atoms. This creates more powerful explosions than fission.

Both of these reactions create three types of radioactive debris.

By 1960 there wasn’t a single place on Earth left untouched by these tests. Every soil sample, every water sample and even every polar ice cap sample, arctic and antarctic, were contaminated…and there was still 50 years more testing to go to bring us to the present day, and the last test conducted by North Korea in 2013.

Simon, Bouville and Land have found that:

“…both direct and indirect evidence that radioactive debris dispersed in the atmosphere from testing has adversely affected public health.”

“Studies have demonstrated radiation-related risks of leukemia and thyroid cancer within a decade after exposure, followed by increased risks of other solid tumors in later years. Studies of populations exposed to radioactive fallout also point to increased cancer risk as the primary late health effect of exposure. As studies of biological samples (including bone, thyroid glands and other tissues) have been undertaken, it has become increasingly clear that specific radionuclides in fallout are implicated in fallout-related cancers and other late effects.”

You can read the rest of their research here.

New research published in the journal Nature Communications has found that radioactive particles from these tests are still in the stratosphere, but volcanic reactions can cause them to move lower, into the troposphere. Their findings were confirmed after the eruption of  the Eyjafjallajökull volcano in 2010. Plutonium levels in the lower atmosphere increased.

At 14:46 on March 11 2011 a massive magnitude 9 earthquake shook the Honshu region of Japan. 40 minutes later a huge tsunami devastated the northeastern coast of Japan. The Fukushima Dai-Ichi nuclear power station, managed by the Tokyo Electric Power Company (TEPCO) was for the most part destroyed.

Three of the six reactors on the site were off-line and undergoing routine maintenance, the remaining three were operational. All of the operational reactors were shut down at the time of the earthquake but external power lines were cut. The reactors need to be cooled even after shutdown and to cool them you need power. Back up power was started and was working until the tsunami hit. The waves reached a height of 12 meters, wiping out the ten meter high sea wall in front of the plant. The plant itself was designed with a maximum safety factor of 5.7 meters, well under the height of the wave.

All backup power, and therefore cooling capacity, was wiped out an hour after the earthquake. Without any cooling, the reactors went critical, and all three suffered core meltdowns within 72 hours of the earthquake. Hydrogen released during the meltdown exploded, blowing out walls and demolishing the roofs of the buildings housing the reactors.

Estimates vary as to how much cesium was released during these explosions, but the general consensus is that at least 168 times more was emitted than was produced when Hiroshima was bombed. The event was given an International Nuclear Event Score of 7, the same as Chernobyl.

Sea water was pumped in to cool the reactors and used fuel ponds and this created over 100,000 tons of contaminated water of which 10,000 tons was released into the Pacific Ocean over the course of the first week.

In the 34 months since the Fukushima disaster there have been literally hundreds of radiation leaks and contamination issues at the plant. Radioactive debris is washing up on the West Coast of the United States, and there are reports of high radiation readings on beaches and American sailors that assisted in the days following the quake and tsunami are finding out they have cancer.

Fish die offs are increasing, and many have been tested and proved to have ingested high amounts of radioactive isotopes. Some scientists are also linking the recent spate of animal die offs to the radiation from Fukushima.

Just a few days ago, ‘steam’ was escaping from one of the shattered buildings, TEPCO has not commented so far.

Considering that Fukushima has released more radiation than 528 air detonation nuclear tests combined, and remembering that radiation from those tests is still affecting people around the globe to this day, the problems caused by Fukushima are going to be with us for generations.

There are 437 operative nuclear power plants world wide, and another 68 under construction. A dozen more are at the planning stage. Are we really so hungry for electricity that we are willing to risk annihilation to get it? What’s the point if generation after generation will suffer increased cancer rates?

There has to be a better way to live…and to die. 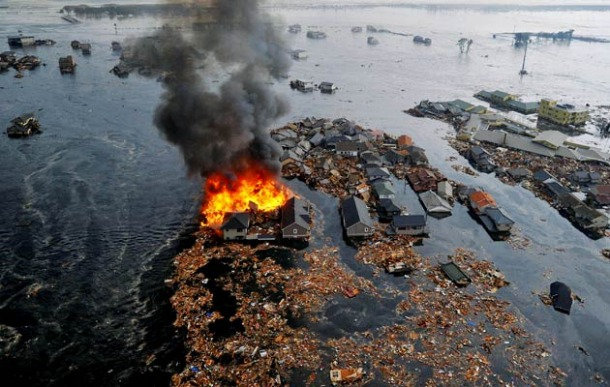