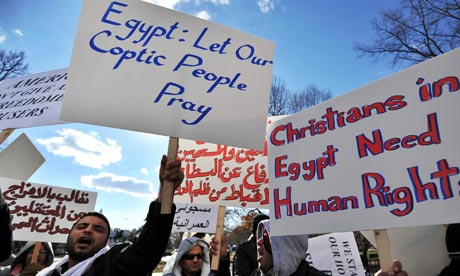 Is this really a kinder and gentler Egypt? As Morsi was being removed a lot of media sources were hailing it as some sort of victory and I held firm to a belief that it was not. Just because you removed the Muslim Brotherhood from power it does not mean that you have removed the Muslims.

I wrote a piece back in July after Morsi was removed that almost no one read. Why? Because people were in love with the hype. If you want to read my opinion on why nothing has changed in Egypt you can go to the link below. If not that’s fine too. As the old saying goes… You can bring water to a mule but you can’t make him bathe.

Do You Think That Egyptians Are Heroes For Overthrowing Morsi? Wake Up!!!

At any rate, with all of the changes in Egypt, one thing has seemingly remained the same and that is the treatment of Coptic Christians. The stories of Copts being mistreated has not stopped with the new regime.

People seem to forget that Morsi made a lot of promises toward equal treatment of the Copts but the persecution did not stop. There was and still seems to be a policy in place to simply look the other way.

Don’t listen to their words. Watch their actions.

Here is the latest story of a young Christian man who died because three Cairo hospitals refused him treatment. BosNewsLife reports:

Ihab Ghattas, 23, reportedly died on New Year’s Eve from a gunshot wound to the head because of “negligence” as the hospitals which refused to treat him, said Copts activist group Maspero Youth Union (MYU).

He was shot outside Mar Girgis (St George’s) Church in the Ain Shams area of Cairo after celebrating mass by suspected supporters of the Muslim Brotherhood movement, MYU said in published remarks.

Ghattas was allegedly denied access in one hospital because it was deemed not to be an emergency, while another cited “a lack of beds.”

The third hospital refused to treat him due to the absence of an intensive care unit, the MYU said.

However doctors could no safe [SIC] his life as he had been “bleeding for three hours”, Christians said. MYU has demanded an investigation, but it was not immediately clear Tuesday, January 6, when and if authorities will search for the attackers.

Can you imagine such a scenario playing out in New York or Chicago?

Nothing would surprise any of us these days but people need to hear the truth about what really goes on in Egypt.

It was bad for Christians under Morsi and nothing has really changed.

This is not the freedom-loving society that people are painting it as.

That is, of course, only my opinion but I haven’t seen a shred of proof that the treatment of my Christian brothers and sisters has changed.

And it probably never will.

We sit and wait for the next tyrant to take his rightful place in Egypt.

In that way our two societies aren’t that much different. There is plenty of Christian persecution going on here as well.