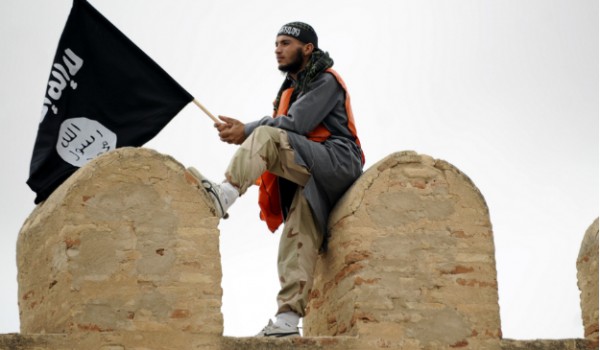 In a stunning and unrecoverable blow to the already damaged  reputation of the NY Times, the State department has blamed al Qaeda-linked groups for the 2012 Benghazi attack on America.

For the NY Times, it may have been the first salvo in the Hillary 2016 offensive, but like the jihad bomber who detonates too early, the NY Times blew itself up and Hillary, too. If America is deaf, dumb and blind enough to elect her, they deserve the punishment they will most assuredly get.

Obama blamed the first amendment and jailed a Coptic Christian who made a you tube video for a murderous jihad attack on September 11th. That’s the real story.

“When Charles Woods, the father of Tyrone Woods, one of the Navy SEALS who died fighting in Benghazi, met with Hillary Clinton, she assured him that, “We’re going to have that person arrested and prosecuted that did the video.” And they got him, officially on charges of violating parole, unofficially on charges of violently offending violent Muslims.

Not only would his son be the first casualty of that appeasement policy, but the Constitution that his son had sworn to support and defend would be the second casualty.

The State Department on Friday for the first time blamed specific groups and militants for the 2012 Benghazi attack, designating them as terrorists — a move that further undermines initial claims the attack was spontaneous.

The State Department also labeled as terrorists Sufian bin Qumu, head of the Darnah branch and a former Guantanamo Bay detainee, and Ahmed Abu Khattalah, head of the Benghazi branch.

Fox News previously reported that the two were suspected of playing a role in the attack. And despite State Department claims that Al Qaeda leadership was not involved and a recent news report echoing that assessment, Fox News has learned that bin Qumu has Al Qaeda ties.

According to his Guantanamo file, he has historic ties to the Al Qaeda network, including training at one point at “Usama bin Laden’s Torkham camp.”

The State Department, in its announcement Friday, specifically discussed allegations against the Ansar al-Sharia branches.

“Ansar al-Shari’a in Benghazi and Ansar al-Shari’a in Darnah have been involved in terrorist attacks against civilian targets, frequent assassinations, and attempted assassinations of security officials and political actors in eastern Libya, and the September 11, 2012 attacks against the U.S. Special Mission and Annex in Benghazi, Libya,” the department said. “Members of both organizations continue to pose a threat to U.S. interests in Libya.”

Shortly after the attack, administration officials indicated it was related to protests over an anti-Islam film that were raging elsewhere in Africa and the Middle East, describing it as spontaneous. They have since backed off that explanation, though have not ruled out the film as having played some role. Many lawmakers, though, have claimed the film was not a factor and the attack was planned by terrorists.

The department on Friday cited Khattalah and bin Qumu over their leadership roles in the al-Sharia organizations. Khattalah, though, told Fox News in October 2012 that while he was at the U.S. consulate that night, he was not responsible for the attack. He claimed he was helping Libyan security workers defending the compound.

The new terror designation bars anyone from providing or trying to provide “material support or resources” to those organizations and individuals, and freezes any assets they have in the U.S. The State Department announced that it has also updated its Rewards for Justice website to include a reward of up to $10 million for information leading to the arrest or conviction of anyone involved in the Benghazi attack.

The department had faced criticism for not including that reward on the website, though officials claimed reward offers had nevertheless been made.

Four Americans died in the 2012 attack, and so far nobody has been brought to justice in connection with the killings.

“The U.S. government is committed to taking all appropriate actions against the organizations and individuals responsible for the attacks against the U.S. diplomatic facilities in Libya and Tunisia,” the State Department said, also referring to a 2012 attack on the U.S. Embassy in Tunis.