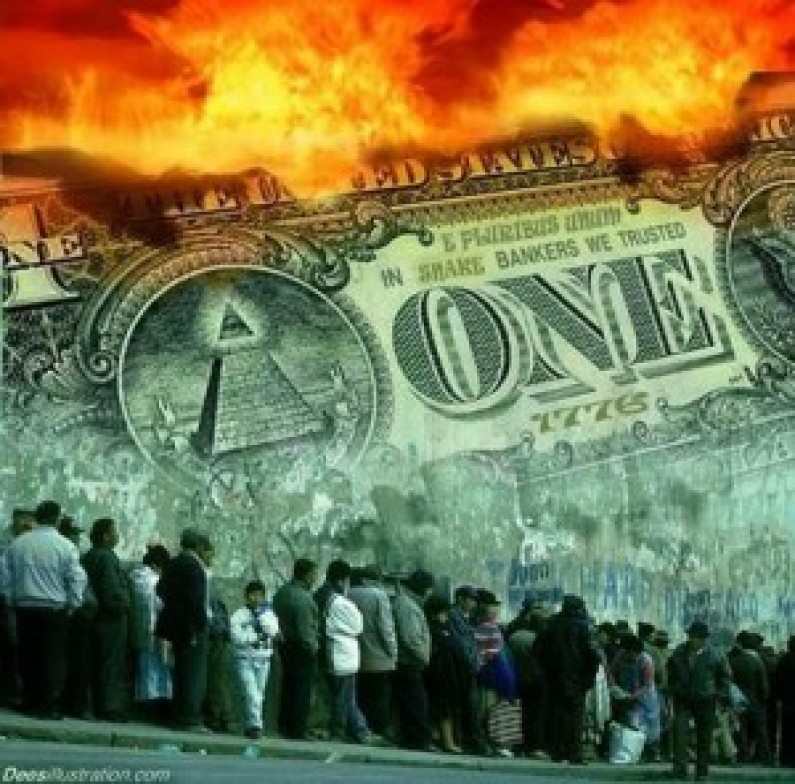 We live in interesting times, or accursed times as the Chinese would call it.  When you think you’ve seen or heard it all, someone or some country ups the ante and normality goes out the window.

The issues that face all of humanity are manifold, they are complex, and like the facets of a diamond, reflect back to us just how screwed up the world truly is.

Below are eight current situations that you face each day that you wake up:

The financial markets are a mess. Each country is running at break-neck speed to financial ruin, and are competing to see who hits rock bottom first:

China: Is on a spending and dept spree never seen before. Tirelessly working on spending money, they don’t have, fraud has crept into a nation built upon family pride and good name. Their bubble will soon burst – and the tidal wave will affect billions of people.

Japan: With over one quadrillion yen in debt, their quantitative easing failed – and our attempts to mimic them have as well. Investors are concerned that their out of control spending will crash the Japanese economy.

England: Sterling silver aside, the United Kingdom is a mirror of the United States, facing an economy worse than America had during the Great Depression. A housing bubble about to burst, and with record high food prices, British investors are busy buying up African farmland to feed the folks back home.

United States: The psychotic financial markets are just a prelude to a crash. Housing markets are shot, auto markets are shot, unemployment at unbelievable records, over 10,000,000 people on disability. It’s surprising that we aren’t having conversations in soup lines yet.

If you had to choose between the Earth’s current ecological problems, or a date with Hillary Clinton, you may want to look in the phone book for restaurants. Yes, it’s that bad.

From the radiation-tainted waters of the Pacific Ocean, to antibiotic resistant superbugs in the food of our stores, it’s just bad all the way round. Air, sea, and land, pollution from natural and man-made sources are presenting dangerous conditions.

The effects on the body are clearly documented, but dangerous foods that are banned in the US are sold without any regard of human life.

It just makes you want to become a farmer so you can eat what you grow.

Politicians, about as useful as a door knob on a rock. Scandals of all sorts don’t stop them and when the honest folks speak out – they are thrown into jail.

Between the NSA, FEMA, DHS, TSA, Bureau of Indian Affairs, local police departments, and local governments – it’s safer to swim with sharks. At least the shark will only attack if they smell blood and not fear.

Our weather is not controlled by man, but by the sun. That doesn’t mean it’s going to be a balmy 70 degrees with a light breeze. If you were living under a rock last week, it was so cold that Mr. Obama was going to redistribute the heat from California and Florida to the 90% of America that was in sub-freezing conditions.

Solar storms, the absence of sun-spots, all mean that the sun is a dynamic and raging star, far more capable of ruining your plans for a perfect day than any man orgovernment. But with the extreme cold, it does make you miss global warming, doesn’t it?

And you can continue to expect more radical weather. Again, not from man, but from natural sources.

And let us not forget that in less than a microsecond, a solar flare can cause an electromagnetic pulse that will turn the United States into a third world country.

When you eliminate top-level predators, the bottom feeders become the bully. Case in point –starvation. A long time ago, starvation would eliminate all but the hardiest of the species. Improved crop rotation and improved medicine, means that cancers and accidents claim more lives than ever before. However, nature is vengeful and antibiotic resistant diseases are now nose-to-nose with humanity, and the first one who blinks loses.

A judge is a person who is to be the decider of facts. But our judiciary is schizophrenic at best. From the NSA surveillience, to the FISA courts (which authorizes wiretaps for the NSA), to judges who persecute farmers who feed the poor, the judiciary is little more than a crap shoot for fairness. The widow and orphan stand a better chance against the elements in some cases.

War is a bloody business, and business is good. The following are the potential wars we are facing right now:

For the love of God people, grow up and act like adults! I’m sure some conflicts were missed, but I think you get the idea.

The last, but not the least – our home. The big blue ball in space – a true diamond in the rough. Whether by design or by accident, an unique place in all the universe.

And it’s doing it’s level best to kill us all.

Volcanoes and earthquakes shake this planet every day, and countless people will think it’s the end of the world. It is, for many, because they die in earth shattering events. In all the seven seas and seven continents, the earth reminds us daily that it is in charge, not the lowly human who can barely keep their buildings intact in even the simplest movement.

Just being in your home opens you up to the threat of literally, the earth opening up and swallowing your home. These events happen and there is very little you can do.

The preceding situations are not to scare you, but to help you prepare. Look HERE for how to prepare for many of the threats that YOU face every day you are alive.

These are not fake threats, nor are they only plausible events. Every last one of the natural events have happened at least once in the past two hundred years, and the man-made ones – about every 100 years or less.

Preparing begins with a plan. Refer to HERE or to http:/www.ready.gov for more information on how to make a plan.

Life is too short to die due to poor planning, so prep like your life depends on it. Because it does.