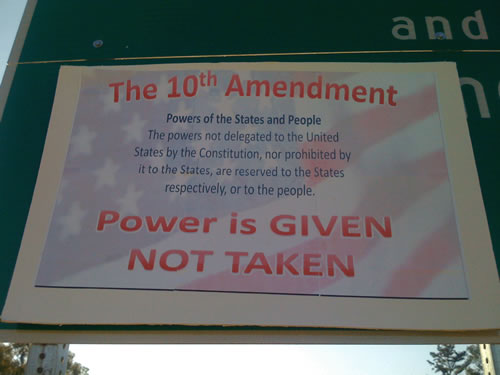 When will the 50 sovereign American States begin to collectively assert their authority under the 10th Amendment to curtail the unlawful power claimed by the federal government to legislate extra-constitutional regulatory laws to control the lives of the American people? The 10th Amendment simply declares the following vital entitlement of the States or the People:

“The powers not delegated to the United States by the Constitution, nor prohibited by it to the States, are reserved to the States respectively, or to the people.”

The U.S. Supreme Court, in 1941, was direly flippant enough to declare the 10th Amendment a truism, which means trite but true, in that laws legislated by Congress which are predicated upon powers not granted to the federal government “might” be allowed. This, to me, is like declaring the 1st Amendment right to freedom of religion a truism, and saying that a law “might” be passed by Congress, and signed by the Executive branch, which would directly infringe upon the Peoples’ freedom of religion. The 10th Amendment is still a part of the Bill of Rights, is it not?

What powers are being directly referenced by the Constitution in the 10th Amendment? The Legislative branch powers are listed specifically, and exclusively, in Article 1, Section 8. For Article 2, the powers of the Executive branch are extremely limited, and utterly minuscule, compared with the powers conferred by the U.S. Constitution on the Legislative branch. I think that the power later conferred, in the 20th Century, upon the President as Commander in Chief was not the same power conferred upon the President in 1798, as explained by James Madison, John Jay, and Alexander Hamilton in the Federalist Papers. Article 2, Section 2 says the following:

The essential questions that arise here may be stated as, who is called into the actual service of the United States, and by whom is the call made? Who, precisely, were the Framers referring to in Section 2, the Militia or the President? To find out, let’s use another example of a similar statement to see the manner in which Standard English grammar was applied in the U.S. Constitution.

The way the Framers phrased Article 2, Section 2 placed the entire meaning of the sentence on the “President” to mean that the President is “not” the Commander in Chief when that person is not called into the actual service of the United States. Now, for the second question. Who does the calling? Well, since the Legislative branch has the specific duties of declaring war, and of regulating the army and the navy (which today would certainly mean the Army, Navy, Marine Corps, Air Force, and Coast Guard), the Federalist Papers clearly indicate that the Legislative branch, the Congress, would do the calling. The President would not be empowered to call himself into service, such as a despotic emperor might seek to do. This was the means provided by the Framers to maintain a defensive military force, and not an imperialistic offensive military like that offensive military that was maintained by King George III, and which eventually controlled one-quarter of the people of the earth, under a monarch, during the 19th Century.

This was why the Framers instituted constitutional law to place civilian control over the republic’s military. This is why the Framers did not want a full-time Commander-in-Chief as a President, and gave the Congress the powers, in Article 1, Section 8, to regulate and control the military to ensure that war was only declared when absolutely necessary. The President was allowed to oversee the military in accordance with what Congress would ‘allow’ him to oversee. The power to conduct foreign affairs, in Article 2, did not include the President using the American military as a means of creating and presiding over foreign policy imposed on other nations. What has happened during the 20th and 21st Centuries is a gross mutation of the Framers’ defensive vision of the military into an imperialistic system much like that of the ancient Roman Empire and the British system against which the American colonists revolted in 1776.

The 10th Amendment was intended to ensure that the federal government would never usurp its constitutional limitations. For instance, if Congress passed a law that mandated that all neonatal children born in the U.S. have RFID chips implanted into their bodies, would the U.S. Supreme Court declare such a law constitutional? Based upon the Obamacare law (the Affordable Care Act), which forces American citizens to, either, buy healthcare, or to pay fines for not buying it, we can surely say that healthcare insurance is as foreign to Article 1, Section 8 as is planting RFID chips into new-born babies. Congress has no real constitutional authority to legislate either type of law. Yet, if Congress can pass a healthcare law that is blatantly unconstitutional, and have it declared as constitutional by the Supreme Court, it can, by illicit precedent, pass a law forcing parents to have RFID chips implanted into their newborn babies, and expect the Supreme Court to validate it as constitutional. The problem with federal enforcement of such a despotic law would be the key element that would eventually, through bloodshed, bring an end to it. If you will recall from sad legislative history, Congress had no power or authority, per Article 1, Section 8, to pass laws regarding civil rights; so they unconstitutionally used the Commerce Clause to fashion laws restricting the commercial freedoms of American citizens, and those laws were subsequently declared constitutional by the Supreme Court. That precedent allowed future unconstitutional laws to be passed, and to be declared constitutional. The means of resistance to such tyranny would, by necessity, go beyond the normal due process of law, and would require an armed and vigilant citizenry, of the States. undertaking nullification of such tyrannical law. Moreover, if a Congress would legislate, and seek enforcement of such tyrannical law, it would probably have no qualms seeking also to abrogate the 2nd Amendment right to keep and bear arms. This is why the Honorable James Madison wrote Federalist 46, to emphasize the need for an armed citizenry, according to the 2nd Amendment, which would be equal to, or greater, than the force imposed by the armed federal military in order to successfully resist the effort of the federal government to impose danger on the People, a danger that would essentially mean a forced repression of liberty and freedom.

In summation, the liberty and freedom guaranteed to the People by the Bill of Rights will always be in danger of repression as long as the Legislative, Executive, and Judicial branches of the federal government seek to denigrate the rules imposed by the U.S. Constitution in accordance with the Framers’ intended application of those venerable rules. Times change, but, like baseball, the rules of the process don’t change. If the basic rules of baseball arbitrarily changed, the game would have to be called something other than baseball. And, certainly, the odious application of federal appellate precedent has, during the 20th Century, created quite a horrible monster when any Supreme Court jurist will casually quip, with no fear of censure, that the passage of one unconstitutional law, and its approval by the highest court in the land, means that any other unconstitutional law may be passed and approved. This judicial applause for tyranny was the basis for inhuman Nazi law to be regarded as sacrosanct by the government of the German Third Reich, and imposed upon the German people. Such Nazi judges were tried for crimes against humanity at Nuremberg.

The issue of resisting and fighting unconstitutional laws seems to hinge on the right of the majority of true American patriots to assert their unalienable authority over a sinister minority of anti-patriots. This is because I believe that there are still many more citizens desiring freedom and liberty to pursue their own special brand of personal happiness than those who believe that sacrificing their liberty for a sick, and ultimately false, illusion of security and regulatory regimentation, by a tyrannical central government, is the best course of action. There is no doubt that a central government that exercises tyrannical power and control over a people in seemingly tolerable increments (which has been happening since 1913) is that government that will seek to inexorably obtain all power and eventually wield complete despotic reign over the governed. Let those despots who would seek all unjust power over the People of the American Republic resign themselves to cease and desist, and to go and proceed according to the federal rulebook in strict adherence to the intent ordained by the Framers of the American Republic, to be held in perpetuity. Or else, let them face a bloody revolution much worse than that faced by the British in 1776. As the Honorable Patrick Henry said, “nex ut totus tyrannus,” which properly translated means, “death to all tyrants.”