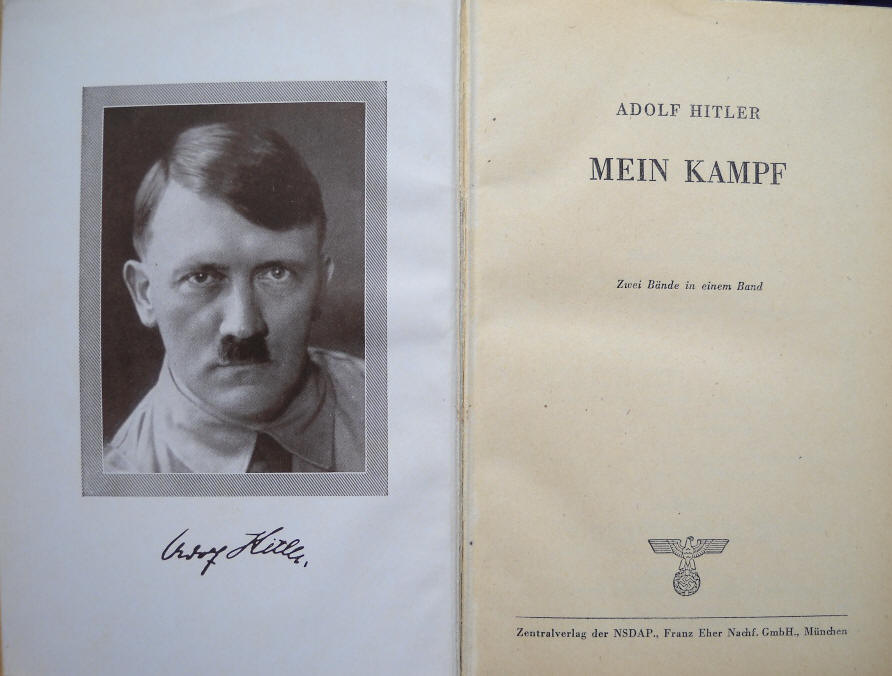 Mein Kampf was Adolf Hitler’s 1923 manifesto for Nazism, the outline for the Holocaust. It was written by the fuhrer when he was imprisoned in 1923. It was his call for annihilation of the Jewish people, as per the will of God. Flash forward to 2014, and Mein Kampf, translated to My Struggle in English, is topping e-book sells. Shockingly, it is outpacing the sales of all of conservative pundit Glenn Beck’s seven books. Even more disturbing, it is holding its own with the works of Sarah Palin and Charles Krauthammer. What gives? The truth about this trend is truly shocking. The reason for the Mein Kampf resurgence has been deemed the 50 Shades Of Grey effect. Simply translated, people are buying the anti-Semitic, pro-Jew exterminating biography because of the anonymity that an e-book provides.

There’s an eroticism to buying a book on the sly. With an e-book, one can be reading pure pornographic smut, and no one will have a clue. This was the secret to the success of the 5o Shades of Grey trilogy. People can download the books without having to be seen carrying around a copy of sadomasochistic debauchery. The same is true for Mein Kampf.  Islam has undeniable ties to Hitler’s Nazi manifesto.

But the resurgence of sales of this book, which marks the modern world’s most horrific atrocity, is astounding. As reported by Chris Faraone of Vocativ.com, the idea that a book, a guided tour for Nazi Hell, is an e-book bestseller is truly hard to believe.

You won’t see Adolf Hitler peering back at you from the featured display tables at Barnes & Noble any time soon. But browse the most popular e-book stores these days and Der Führer’s mug is seemingly unavoidable. For a year now, his magnum manifesto has loomed large over current best-sellers on iTunes, where at the time of this writing two different digital versions of Mein Kampf rank 12th and 15th on the Politics & Current Events chart.

In fact, all seven of Beck’s books trail Herr Hitler’s nearly century-old tell-all, which consistently holds its own against new e-blockbusters like Game Change by John Heilemann and Mark Halperin, This Town by Mark Leibovich, and Nate Silver’s The Signal and the Noise.

Mein Kampf hasn’t made The New York Times nonfiction chart since its U.S. release in 1939, the same year Germany invaded Poland, and its print sales have fallen steadily ever since. But with a flood of new e-book editions, Hitler’s notorious memoir just clocked a banner digital year. One 2012 English-language version is currently the number one Propaganda & Political Psychology book on Amazon. Another digital selection is a player in the Globalization category.

This is truly unbelievable. But the numbers do not lie. The fact that a book of genocide is the number one Propaganda and Political psychology book on Amazon is truly horrifying. To quote Hitler in Mein Kampf, “For a racially pure people which is conscious of its blood can never be enslaved by the Jew. In this world he will forever be master over bastards and bastards alone.” Here, he stops at nothing, and in his vileness he becomes so gigantic that no one need be surprised if among our people the personification of the devil as the symbol of all evil assumes the living shape of the Jew.

These are but two sentences in a book spewing with vile, blood twinged hatred toward the Jews. In a book that is composed of two volumes and fifteen chapters, thoughts of the six million murdered Jews flood the mind. How anyone could read this without thinking of gas chambers, firing squads, scientific experiments, and the burning alive of Holocaust victims is impossible to fathom.

So is it the rush of reading something scandalous that keeps people downloading Mein Kampf or is it something more sinister? Undoubtedly, it is curiosity about Satan’s spawn Adolf Hitler, but this book is also influential. With the ever-increasing tide of global anti-Semitism, reading a book calling for genocide of the Jews cannot help but influence thought. Undoubtedly, Islam is the culprit for today’s surge in anti-Semitism. But the close association between Hitler and Islam cannot be overlooked.

But as tablets gained popularity in the late-2000s, the e-book’s presence grew and then soared. Besides the iTunes and Kindle-compatible versions, hundreds of txt and pdf files are available for download from thousands of online sources. More than a dozen free English-language versions of Mein Kampf have been downloaded in excess of 100,000 times from the nonprofit Internet Archive alone.

In an email to Vocativ, Elite Minds President Michael Ford says, “Sales are great,” but notes that he faces “a moral dilemma in promotion,” in that he fears advocating “something that could be misused.” He says, “I have not heavily promoted the book and decided, for the most part, to let it spread among those who have a true historical and academic interest naturally.”

People might not have wanted to buy Mein Kampf at Borders or have it delivered to their home or displayed on their living room bookshelf, let alone get spotted reading it on a subway, but judging by hundreds of customer comments online, readers like that digital copies can be quietly perused then dropped into a folder or deleted. “I think I waited 45 years to read Hitler’s words,” writes one reviewer. Another sums it up thusly: “Curiosity killed me to get this book.”

Rice University sociologist Elizabeth Long noted that stigmatized genres like “mystery, science fiction and especially pornography” have forever been “sentenced to back corners, stuffed away out of sight,” and predicted that taboo titles would migrate off physical bookshelves and into the cloud.

Herein lies the truth about the dark heart of man. When reading smut in secret, a person thinks no one is watching. The resurgence of Mein Kampf is nothing short of baffling. People are feeding their twisted, sin sick imaginations. Worse, the seeds of Jewish hatred are planted. Could this lead to another Holocaust? Absolutely. The poison is everywhere.