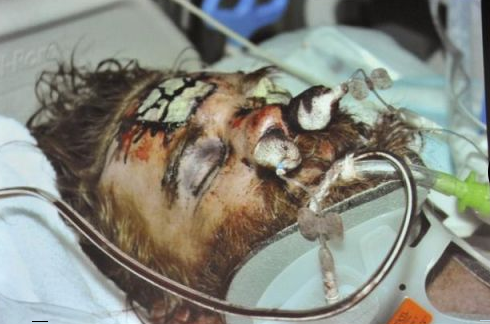 Monday two ex-police officers were found not guilty in the 2011 beating death of a mentally ill homeless man.

Kelly Thomas, a 37-year-old homeless man with schizophrenia, was approached by Fullerton police who were responding to a vandalism call on the night of July 5.

“You see my fists? They’re getting ready to f*ck you up.”

Thomas, while sitting on the ground, told the officer, “Start punching, dude!”

He stood up to walk away, and that’s when a second officer started beating him with a baton.

Thomas can be heard pleading for the officers to stop hitting him:

About 16 minutes into the altercation, two officers are seen on top of Thomas, who protested:

A police car arrived at the scene around 18 minutes into the ordeal, and at least one more officer joined in the merciless abuse of Thomas, who can be heard calling for help:

Naturally, the officers attempted to justify their excessive and disgusting use of force:

“We ran out of options so I got the end of my Taser and I probably … I just start smashing his face to hell,” says Cpl. Jay Cicinelli, according to the transcript provided by prosecutors. “He was on something. Cause the three of us couldn’t even control him.”

The video footage seems to tell a completely different story. Ran out of options? They couldn’t control Thomas while they were piled on top of him and he was begging for mercy?

Thomas sustained severe head and neck injuries from the abuse. He had lost consciousness by the time medics arrived.

He spent five days in a coma, and his family decided to take him off life support.

Both officers finally had their day in court today, and the outcome is shocking:

Manuel Anthony Ramos, a second-generation cop, was acquitted of second-degree murder. He was the first person in Orange County history to be charged with murder for an on-duty incident while a uniformed officer. He had faced a potential 15-year prison term.

The same eight-woman, four-man jury also acquitted ex-Cpl. Jay Cicinelli – Ramos’ former colleague – of involuntary manslaughter and assault under color of authority for his role in the July 5, 2011, beating of Kelly Thomas. (source)

The Orange County Register reported on details of the trial:

Orange County District Attorney Tony Rackauckas contended that Ramos triggered a fatal beating when he snapped on latex gloves during a routine questioning and issued a profanity-laced threat to Thomas. Rackauckas contends that Cicinelli applied excessive force when he used a plastic Taser to smash the struggling Thomas in the face after the device was not effective as a stun gun.

Defense attorneys John Barnett and Michael Schwartz argued that the two officers properly followed their training and violated no law when they detained Thomas after a dispatch call that a homeless man was trying the doors of parked cars. The defense team insists it was a belligerent Thomas who escalated the encounter by refusing to identify himself or follow lawful orders.

The surveillance video was the key piece of evidence:

Rackauckas, a former judge, argued that the videotape showed an angry and overzealous Ramos taunting a confused and compliant Thomas – a transient he knew well from seven prior contacts – and then escalating the routine encounter with an unlawful and brazen threat.

Ramos triggered the fatal beating, Rackauckas insisted, when he snapped on a pair of latex gloves, leaned over to Thomas as he sat on a curb, and threatened, “Now see these fists? They’re getting ready to F— you up.” (source)

Defense attorneys argued that the actions of the officers during the altercation were not substantial factors, as required by law, in Thomas’ death and that he died of a diseased heart weakened by years of methamphetamine abuse.

But the coroner determined that Thomas died from mechanical compression of the thorax, which made it impossible for him to breathe normally and deprived his brain of oxygen. The autopsy also showed he had multiple broken bones in his face and several cracked ribs.

So how did this jury find the ex-officers not guilty?

Ramos’ attorney, John Barnett, told reporters: “These peace officers were doing their jobs…they did what they were trained to do.”

Peace officers?  Doing what they were trained to do?

Chilling. Every bit of it.