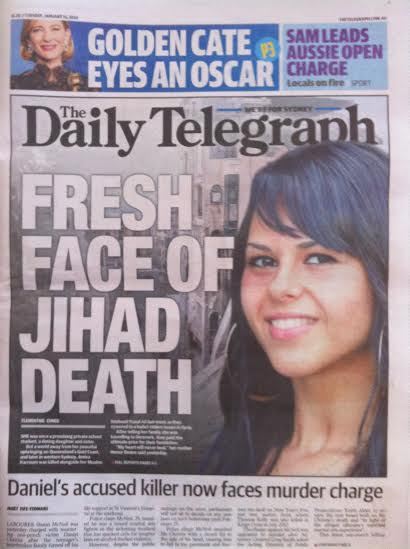 “He said Karroum did not wear a burqua or niqab, traditional Muslim dress for women, until a few years ago. “She started wearing it once she studied her religion more as an adult …”

And this is what happened when she became devout.

Pictured clad in a black burqa, Karroum bore no resemblance to the fresh-faced student from one of the country’s most prestigious Anglican schools when she died in a bullet-ridden house in Syria last week.

And we are told, despite the millions of Muslims waging jihad in the cause of Islam, that they are all misunderstanding Islam in exactly the same way. Exactly the same shared …confusion. Why aren’t psychiatric institutes studying this impossible phenomena, this fantastical mass delusion? Because it doesn’t exist. Muslims are doing what they are commanded to do. Here was a girl who had the best the West had to offer, and she was subsumed by the most violent and extreme ideology on the face of the earth.

“Family and friends gather at Sydney mosque to remember slain Muslim woman Amira Karroum and her husband Yusuf Ali,” By Clementine Cuneo, The Daily Telegraph (thanks to Kenneth)

A MEMORIAL service has been held at a western Sydney mosque for slain Muslim woman Amira Karroum, and her husband Yusuf Ali.

Ms Karroum’s sister Rose requested the Masjid Noor mosque in Granville hold the service, last night, for worshippers to mourn the couple who were killed in Syria late last week.

Both Ms Karroum and Mr Ali were worshippers at the mosque before Mr Ali moved to Syria mid-last year.

Relatives today said arrangements were still being made to fly the couples’ bodies back to Australia for burial.

Pictured clad in a black burqa, Karroum bore no resemblance to the fresh-faced student from one of the country’s most prestigious Anglican schools when she died in a bullet-ridden house in Syria last week.

The 22-year-old had left her western Sydney home just days before Christmas, telling her family she was heading to Denmark to holiday with friends and then do some humanitarian work.

But on Saturday morning, Department of Foreign Affairs officials broke the news to Karroum’s father Mohamad and mother Honor Deane their daughter and her Muslim husband, Yusuf Ali, had died in the war-torn country, the latest victims of the conflict that has been raging since 2011.

Gold Coast-based Mr Karroum, who runs a kebab shop in Broadwater, collapsed with a heart attack after hearing the devastating news. A rocket is fired by rebel fighters in the city of Aleppo, ground zero of the Syrian civil war. Source: DailyTelegraph

Amira Karroum and her husband were killed inside a house near the city of Aleppo, ground zero of the war near the border with Turkey, last Thursday, possibly by members of the Free Syrian Army, which is fighting government troops and other factions of the rebel movement trying to oust President Bashar al-Assad. When she finished school five years ago, before moving to Granville in Sydney’s western suburbs, Karroum showed no hint of being the radical Muslim she would become.

Her half-brother Karl Karroum said yesterday it was a mystery how she came to be in Syria.

“We had no idea she was going to Syria. She left Sydney about December 20, I think, and said she was going to Copenhagen for a holiday with friends and to do some humanitarian work,” Mr Karroum said.

“How or why she ended up in Syria, we just don’t know.

“I mean, her husband lives in Syria, so that’s obviously why she went there, but we thought he was going to meet up with her in Copenhagen.”

Karroum grew up on Queensland’s Gold Coast, where she was educated at the prestigious St Hilda’s school, graduating in 2008. She then enrolled to study graphic design at Queensland’s University of Technology. Yusuf Ali Amira Karroum, wearing her burqa, gets a kiss from the husband she died beside. Source: DailyTelegraph

Karl Karroum said his half-sister was always a Muslim, despite her Anglican education.

“She was born a Muslim, so was her sister Rose. Their mum isn’t Muslim, but our dad is,” he said.

“She went to that school because it was the best education, and an all-girls’ school… it suited our faith.”

He said Karroum did not wear a burqua or niqab, traditional Muslim dress for women, until a few years ago.

“She started wearing it once she studied her religion more as an adult … she definitely wasn’t a recent convert to Islam, that’s not right,” he said.

In mid-2012, Karroum moved to Granville, in Sydney’s western suburbs, where she met Ali, who is believed to be a Muslim convert originally from North America. They married in Sydney in April last year. Amira Karroum wearing the burqa she adopted only a few years ago. Source: Supplied

Ali left Granville and headed to Syria soon after the wedding, telling friends at a Granville mosque he was going to do humanitarian work. It is understood some worshippers at the mosque suspected he was planning to fight for a jihadist faction.

But Karl Karroum said he had no knowledge of Ali’s involvement in the civil war in Syria.

“They are peaceful people,” he said.

On Facebook, Ms Karroum’s sister Rose asked for prayers in the dead pair’s honour, claiming they had been “martyred”. “Please everyone make dua for my sister Amira Ali and brother Inlaw Yusuf. They have been martyred,” she wrote.

“I miss u already. May Allah grant u and Yusuf the highest of heavens and be together always. Love u my beautiful sister Amira Ali.”

Last night the grieving family was waiting for Mr Karroum Sr’s blood pressure to drop before he could fly to Sydney and begin making plans to bring his daughter’s body home.

“Dad’s planning to come to Sydney once his blood pressure comes down, and then we can make funeral plans,” Mr Karroum said.

“It’s such an awful time. We really don’t know what’s happened … we need to get to the bottom of a lot of things.”

DFAT said in a statement yesterday that Australians were “strongly advised” not to travel to Syria because of the “extremely serious security situation” in that country.

“Australia does not have an embassy or consulate in Syria,” the DFAT statement said.

“The Australian government’s capacity to deliver consular assistance in Syria is extremely limited.”