Check out these people in Plano, Texas lined up to get a free flu shot a few days ago: 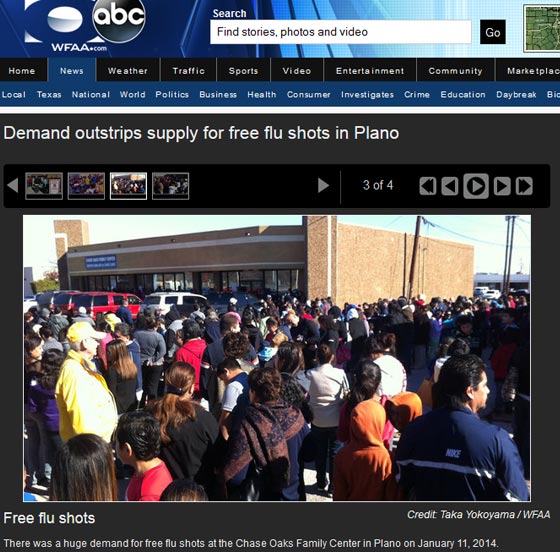 This report comes from ABC-affiliate WFAA8 out of Dallas, Texas. It begins with, “A deadly flu outbreak in North Texas has spurred demand for vaccinations. A free flu shot clinic in Plano on Saturday afternoon was overwhelmed with hundreds of people seeking the immunization…”

It ends with, “The Centers for Disease Control reports that influenza is currently ‘widespread’ across Texas and in most other states. There have been at least 32 flu-related deaths reported in North Texas this season — 26 in Dallas County, three in Denton County, two in Tarrant County, and one in Wise County.”

A picture gallery shows flu clinics flooded with people, and the top five news stories on the whole entire news channel are all about how deadly and scary the flu is. 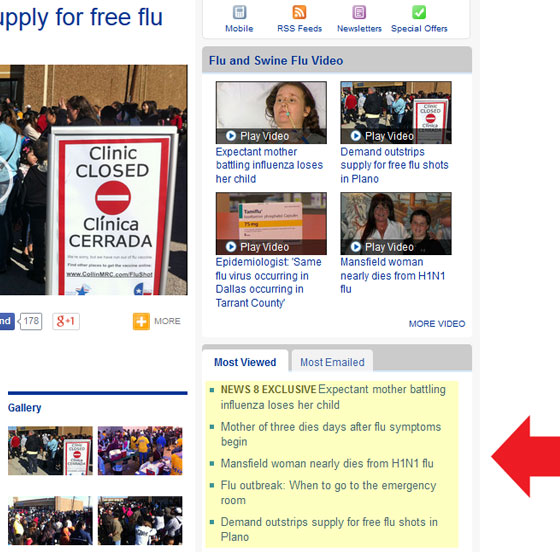 “Woman nearly dies”…”expectant mother with flu loses child”…”when to go to the emergency room”… Even the news channel’s side bar has a special section entitled, “Flu and Swine Flu Video,” which looks like a fun way to spend an afternoon.

If you only got your news from this local source, you might think the whole world was coming to an end and people are dropping dead from the flu left and right in some sci-fi movie flu-ocalypse scenario.

But let’s analyze what’s really going on here. Twenty six people died in Dallas County, Texas. Does that seem like a lot? Considering Dallas County is home to 2.454 million people, that means 0.001% of people have died from the flu there. That ‘overwhelmed’ clinic in Plano wasn’t even located in any of the counties where the flu deaths were reported.

Top stories and big ratings equal big viewership and top dollars. Whipping people up into a panic with propaganda, in short, sells.

There’s no mention about the lifestyles or medical histories of the people who succumbed to the flu. Were they already sick? Did they already suffer from a weakened immune system? What did they eat? These stories make it sound like you could just be walking down the street and BAM! The flu hits you, you automatically die hours later like it’s a gentically engineered ebola virus and we’re all in Mission Impossible II or something.

The truth is, we live in a toxic environment and many people are subsisting day-to-day on food that’s utterly devoid of nutrition. Some 70,000 chemicals are “in commerce” in the U.S. alone, with another thousand or so new ones produced every year. Insecticides, herbicides, fertilizers, PCBs, pharmaceuticals, plastics and other petrochemical byproducts and lot more long ago entered our water, air, soils and food chain — resulting in food with much lower vitamin content and a tidal wave of disease.

What’s in a Shot?

People’s immune systems are shot. Speaking of shot, getting a flu shot means you inhale or inject the substance directly into the bloodstream, bypassing the digestive system that contains the majority of your immune system, so it can’t mitigate the ingredients.

Why is this important? In her article “Five Reasons I’ll Never Get the Flu Shot,” Organic Prepper‘s Daisy Luther points out that there are some downright dangerous ingredients in these shots:

Studies have shown the flu shot only actually prevents flu a measly 1.5% of the time anyway. As Luther notes, “I’d honestly rather take my chances with the flu than to have myself injected with something that carries the risk of such side effects on the off-chance (the 1.5% off-chance) that I might avoid catching the 1% of viruses that the shot ‘protects’ me from.”

That’s right. Every year the experts guess at what three or so viruses go into the seasonal flu vaccine out of hundreds of existing strains. And if the flu virus should mutate (as it is prone to do)?

In short, to “save” yourself from the flu, you are putting yourself at risk with toxic ingredients that could potentially cause much more severe, long-term damage in a multitude of other areas throughout your entire body.

While 32 people have died of flu in North Texas as the media is scaremongering every other five minutes (that, or you know, weakened immune system function that would allow those particular people to succumb to the flu based on nearly endless other health and lifestyle factors), other reports show that people die of the flu shot itself as well.

Reports in the government’s Vaccine Adverse Events Reporting Systems (VAERS) — where less than 1% of adverse effects are even reported each year — show that 51 people died of flu vaccines in 2011 alone. A nearly 4,300% increase in fetal deaths was reported following pregnant women getting flu shots back in 2009, figures the CDC apparently failed to disclose. Last November, an otherwise completely healthy 19-year-old died after he took a flu shot that caused his brain to swell to the point that it actually crushed his brain stem. Doctors could find nothing else wrong with him.

Should you get scared and line up to buy the hype? Dr. Mercola‘s advice tells us the best protection against the flu is the exact same protection people used for years before there ever was a flu vaccine: avoid stress, get enough rest and exercise, wash your hands regularly, eat as healthy as you can and keep your vitamin D levels up.