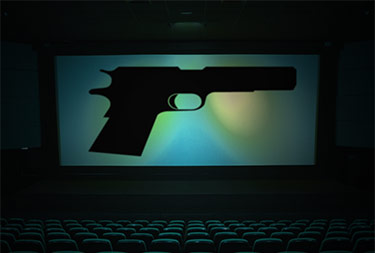 A 71-year-old retired Tampa, Florida police captain went to the movie theater Tuesday afternoon to watch a matinee of “Lone Survivor,” but he left in handcuffs with a charge of second-degree murder:

Two couples were among patrons at a matinee of “Lone Survivor” at the Grove 16 movie theater in Wesley Chapel, about 20 miles northeast of Tampa, when one of the men, a retired Tampa police officer, got angry because the man in front of him was using his phone during the previews, despite being asked to stop several times, said Douglas Tobin, a Pasco County sheriff’s office spokesman.

A witness told local television stations that the offended man stormed out to get a manager, but returned without one. The man using the phone explained to the irritated man that he was simply texting his 3-year-old daughter, the witness, Charles Cummings, told Tampa’s FOX 13 television. (source)

The victim, 43-year-old Chad Oulson, died of his wounds. His wife had just put her hand on Oulson when the shot rang out, and she was also wounded in the exchange.

While polls show that 97% of people are completely intolerant of others talking during a film, leading some movie theaters to institute bans on all cell phone use whatsoever during a movie upon penalty of being kicked out without a refund, this was during the previews. No matter what Oscar-winning film is about to play on screen, are movie previews so important they are worth taking another man’s life over? The former police officer, Curtis Reeves, will have a lot of time to think about that if he’s convicted.

Going to the movies used to be fun, or at least, it was historically supposed to be. A lot has changed over the years. In modern America, movie theaters are apparently really tense places. Earlier this year, a mentally handicapped man with Down’s syndrome was suffocated by three off-duty officers hired as theater security because the man refused to leave after the matinee was over and wanted to watch it again. Just a few weeks ago, a mob of some 600 people stormed a Jacksonville, Florida movie theater, resulting in a free-for-all brawl out in the parking lot requiring a 60-officer response. Let’s not even get started on the Batman Massacre that took place at an Aurora, Colorado movie theater back in 2012…

While the extreme measures of taking a life over bad manners or a lack of social graces might have had its place back in the Wild West days, it really has no place in modern society. Why? Besides being wrong at multiple levels (where’s the justification for taking someone’s life over texting during a freakin’ movie preview? If everyone shot anyone who simply annoyed them, eventually there’d be no more people left), the reality is that incidents like this one are ultimately only fodder for our authoritarian police state controllers to institute even more control down every avenue of civilized life.

Point? Now politicians have been served a brand new talking point for their gun control agenda on a silver platter. Most movie theaters are already gun-free zones anyway (even when history shows they really shouldn’t be.) While the Transportation Security Administration (TSA) has long been “securing” a lot more than transportation venues in this country — locales such as football games and Indy 500 races — they have yet to make their appearance at a movie theater.

Can you imagine a TSA checkpoint pat down becoming as common at the movies as buttered popcorn?