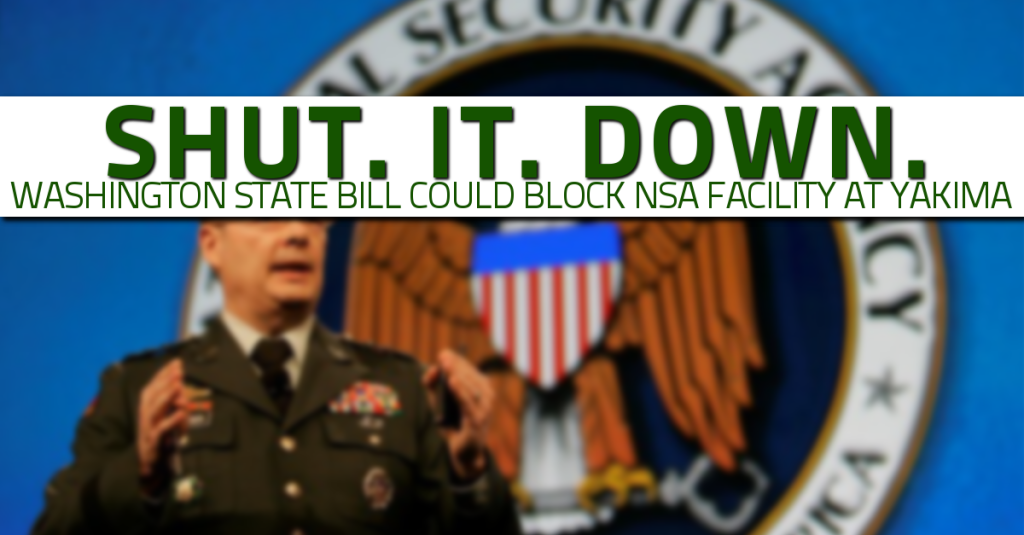 The state level campaign to turn off power and electricity to the NSA got a big boost Wednesday.

Rep. David Taylor (R-Moxee) and Rep Rep. Luis Moscoso (D- Mountlake Terrace) introducedHB2272 late Tuesday night. Based on model language drafted by the OffNow coalition, it would make it the policy of Washington “to refuse material support, participation, or assistance to any federal agency which claims the power, or with any federal law, rule, regulation, or order which purports to authorize, the collection of electronic data or metadata of any person pursuant to any action not based on a warrant.”

Practically speaking, the bill prohibits state and local agencies from providing any material support to the NSA within their jurisdiction. This includes barring government-owned utilities from providing water and electricity. It makes information gathered without a warrant by the NSA and shared with law enforcement inadmissible in state court. It blocks public universities from serving as NSA research facilities or recruiting grounds. And it disincentivizes corporations attempting to fill needs not met in the absence of state cooperation.

Lawmakers in Oklahoma, California and Indiana have already introduced similar legislation, and a senator in Arizona has committed to running it there, but Washington counts as the first state with an actual NSA facility within its borders to consider the Fourth Amendment Protection Act. The NSA operates a listening center on the Army’s Yakima Training Center (YTC). The NSA facility is in Taylor’s district, and he said he cannot sit idly by while a secretive facility in his own backyard violate the rights of people everywhere.

“We’re running the bill to provide protection against the ever increasing surveillance into the daily lives of our citizens,” he said. “Our Founding Fathers established a series of checks and balances in the Constitution. Given the federal government’s utter failure to address the people’s concerns, it’s up to the states to stand for our citizens’ constitutional rights.”

According to documents made public by the US Military, as of 2008, a company called PacifiCorp serves as the primary supplier of electric power, and Cascade Natural Gas Corporation supplies natural gas to YTC. The Kittitas Public Utility District, a function of the state of Washington, provides electric power for the MPRC and the Doris site, but no documentation has yet proven that it also provides electricity used directly by the NSA facility on site. And while YTC does provide a bulk of its own water, documents also showthat some of it gets there by first passing through upstream dams owned and operated by the State.

The Army report states, “YTC lies within three WAUs whose boundaries coincide with WRIAs, as defined by the State of Washington natural resource agencies.”

A Washington company also has a strong link to the NSA. Cray Inc. builds supercomputers for the agency.

If the bill passes, it would set in motion actions to stop any state support of the Yakima center as long as it remains in the state, and could make Cray ineligible for any contracts with the state or its political subdivisions.

Three public universities in Washington join 166 schools nationwide partnering with the NSA. Taylor’s bill would address these schools’ status as NSA “Centers of Academic Excellence,” and would bar any new partnerships with other state colleges or universities.

“We know the NSA shares data with state and local law enforcement. We know from a Reuters report that most of this shared data has absolutely nothing to do with national security issues. This bill would make that information inadmissible in state court,” he said. “This data sharing shoves a dagger into the heart of the Fourth Amendment. This bill would stop that from happening. This is a no-brainer. Every state should do it.”

Maharrey said he expects at least three more states to introduce the act within the next few weeks.

“This idea is catching fire,” he said. “And why wouldn’t it? We have an out of control agency spying on virtually everybody in the world. We have a president and a Congress that appears poised to maybe put a band aid on it. Americans are realizing if we are going to slow down the NSA, we are going to have to take a different approach. This is it.”