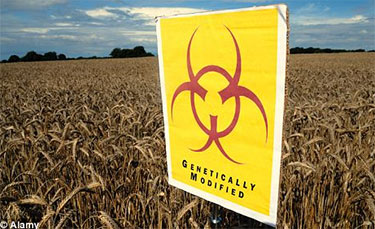 Glyphosate does not cause adverse reproductive effects in adult animals or birth defects in offspring of these adults exposed to glyphosate, even at very high doses.

However, in a 2011 Earth Open Source report, eight researchers question whether or not the industry along with government agencies including the European Union are obscuring information on glyphosate’s links to birth defects:

The public, in contrast, has been kept in the dark by industry and regulators about the ability of glyphosate and Roundup to cause malformations. In addition, the work of independent scientists who have drawn attention to the herbicide’s teratogenic effects has been ignored, denigrated, or dismissed. These actions on the part of industry and regulators have endangered public health. They have also contributed to the growing division between independent and industry science, which in turn erodes public trust in the regulatory process. [emphasis added]

The report cites 2010 research which demonstrated that glyphosate could cause birth defects in frog and chicken embryos even at levels much lower than those commonly used in agriculture today. While the EU currently has a maximum glyphosate residue limit in place of 20 mg/kg, some soybeans tested there have been found to contain nearly the limit at 17 mg/kg. The study, however, found that dilutions as low as 2.03 mg/kg caused malformations.

The European Union Commission completely dismissed these findings, citing the German Federal Office for Consumer Protection and Food Safety, which in turn had used unpublished industry studies to back glyphosate safety claims.

Although this research was delivered to the commission, instead of considering it, the EU quietly delayed glyphosate’s official review (along with 38 other pesticides) until 2015, saving glyphosate from having to meet more stringent pesticide regulations that went into force in 2012.

The report reveals that even industry studies have concluded glyphosate is dangerous and causes malformations:

In fact, it would appear that the EU has repeatedly dismissed independent findings that glyphosate causes birth defects — as well as a host of other serious issues including cancer, endocrine disruption, neurotoxicity, and DNA damage, in addition to reproductive and developmental toxicity. Earth Open Source notes that most of these studies are also at low concentrations.

In addition, the report notes that glyphosate was only tested by itself as a stand alone ingredient. Roundup contains adjuvants and other supposedly “inert” ingredients in a formulation that was not tested before the product was sold. Studies have shown the combination of glyphosate and these adjuvants is actually substantially more toxic than just glyphosate alone. The new EU regulation would have addressed this, but Monsanto is skirting around it with the EU’s delay of the pesticide’s review.

Earth Open Source researchers are concerned that the commission may not fully re-assess glyphosate’s safety in regard to current science until 2030 now. “The beneficiary will be the pesticide industry; the victim will be public health,” the report surmises.

In response to the delay, the Pesticides Action Network Europe and Greenpeace filed a lawsuit against the EU.

What about glyphosate regulations in the U.S.?

Ha! Are you kidding?

At least the EU is going through the motions to appear to protect the people from unlabeled GMOs and toxic chemicals. Our government continues to show it is straight up owned by corporations, and Big Agra is no exception. Have you seen the revolving door chart for Monsanto and the American government lately? 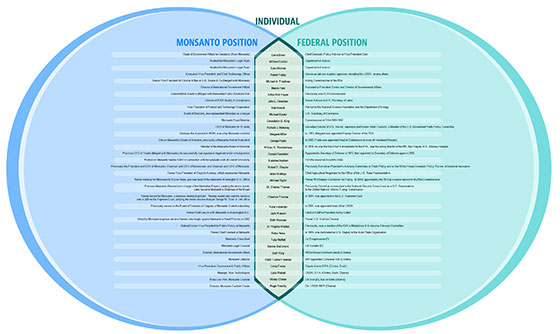 There’s so many people on it, the creators at Occupy Monsanto had to use an eight-point font. Eventually it’ll be so large, it’ll only be able to fit on a billboard.

Just in the six years from 2001 to 2007, use of glyphosate in the U.S. doubled according to the EPA: jumping from 85-90 million pounds to 180-185 million pounds annually. It far outranks all other most commonly used pesticides out there, likely because of the proliferation of glyphosate-tolerant genetically modified crops in this country.

Despite scads of independent studies showing that glyphosate harms the environment and all the living things in it in a multitude of horrible and carnival freak show ways, the EPA recently approved a Monsanto petition to actually raise the allowable limits of glyphosate on crops — in some cases as much as 3,000%. Hungry yet?

In fact, the so-called Environmental Protection Agency is so lax in regard to glyphosate, that one wonders if it will soon be approved as a new water additive like fluoride or maybe even used as a new sports drink flavor. The agency already allows 0.7 mg/L or 700 parts per billion in the drinking water as it is. Of course, as the chemical’s use becomes even more ubiquitous, who knows what they’ll decide the new “adequate margin of safety” is on a lifetime of consuming water and food tainted with glyphosate.

That’s right, because this stuff bioaccumulates and studies show the new Roundup Ultra is apparently even more ecotoxicological than glyphosate itself! (Yay for us.)

Hell, Syngenta’s herbicide atrazine has already turned up in 94% of nation’s water supply, and that stuff has been found in studies to turn male frogs into demasculinized hermaphrodites even at low doses, so…

(Read Earth Open Source’s full report “Roundup and birth defects: Is the public being kept in the dark?” here.)