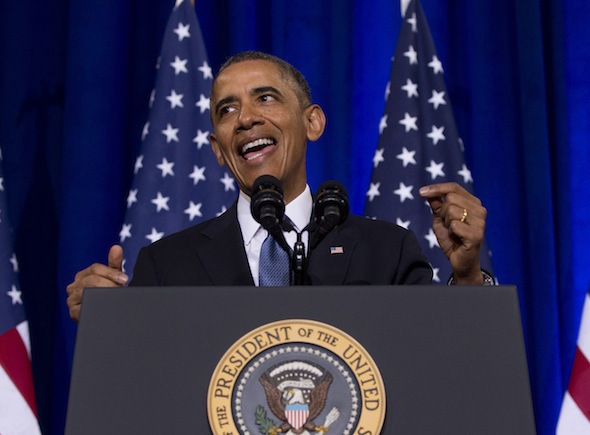 OK folks…I’ll begin at the end…Barack HUSSEIN Obama saying “God Bless America” twice at the end of yesterday’s press conference just turned my stomach because you could see him choking on those words while trying to get them out…good thing they were on the teleprompter or I doubt they would have come out at all, but back to the beginning.

Yesterday, after a six-month White House ‘supposed’ investigation into whistleblower Edward Snowden’s flood of disclosures about the true scope of U.S. spying, President Obama (gag) held a press conference to discuss the changes he will implement in how the NSA collects and stores data on ‘We the People,’ our allies, and our enemies.

Saying that the NSA officials did NOT “intentionally abuse” the program to invade our privacy…yeah right…Obama went on to say that he believed opponents of the program had been correct in saying that without proper safeguards the data collection could be used to garner even more personal information about the private lives of Americans then they already had, and that it could open the door to even more intrusive programs.  Nice words but the thing is Barack HUSSEIN Obama was the very man who ordered the NSA to ‘spy’ on American citizens and will continue to order them do so.

And critical to all he said…actually to what he did NOT say (taqiyya in action)…is that in NO way will the invasion of our privacy be stopped… translating into the information will still be collected just NOT as much of it…at least that we can see that is.

Also, Obama said that ‘some’ of the changes he intends to make will take effect immediately, but that ‘other’ changes will require further study…which means more of our taxpayer dollars will be wasted on a study of a program that clearly violates our 4th Amendment rights…and that those changes may take an action of Congress to be implemented.  Uh oh…this sitting Congress does NOTHING as it is so I guess that means that in regards to spying on ‘We the People’ they will do even less than NOTHING.

“The reforms I am proposing today should give the American people greater confidence that their rights are being protected, even as our intelligence and law enforcement agencies maintain the tools they need to make us safe,”Obama said during the press conference.

Greater confidence in an administration that shoved the ObamaCare monstrosity down our throats, still covers-up ‘Fast & Furious and does even worse in regards to Benghazi…NO…I don’t think we have any confidence at all in anything this most miserable of presidents proposes.

So folks here now is just a bit of what Obama proposed…and just this bit alone should have you hopping mad.  First off, effective immediately, the NSA will be required to get a ‘secretive’ court’s (actually the Foreign Surveillance Intelligence Court) permission before accessing phone records and data that will still be collected from millions of law-abiding Americans…but I say why NOT an ‘open court’ of public record…why a ‘secretive court’…what’s he still trying to hide…hmmmmm…

And Obama said that those phone records…which includes numbers dialed and length but NOT content of calls…will NO longer be stored by the government itself but either by a third party or by the phone providers themselves. Oh really…and what of the huge data mining storage center that he had built in Bluffdale Utah…who now will be the keeper of the phone records when a  ‘For Sale’ sign gets tacked to its front door.  And with the phone companies opposing the expense and potential liability of holding said data, and with NO ‘credible’ third party yet to come forward, you can rest assured that if a third party does takes over they will be one hand-picked from his many campaign donors so that all Obama has to do when he wants to do his snooping is just mossy on over to that third party and say, ‘let me see’…just a slight detour in his targeted control of ‘We the People.’

And this little goody…which al-Qaeda operatives and other assorted terrorists will love…borders on the outright dangerous when it comes to the monitoring of true terrorist activity (the only activity that actually should be monitored), as Obama has said that the government will NO longer be allowed to access phone records beyond two so-called ‘hops’ from the person they are targeting… meaning NO access to phone records for someone who called someone, who called someone, who called the suspect, will be allowed…. NOTHING like helping the brethren yet again.

Also saying that the U.S. won’t monitor the communications of “our close friends and allies overseas” unless there’s a‘compelling’ national security reason is pure hogwash as Obama is NOT releasing a list of which countries fall under that category…and Obama being what he is with America’s allies being his enemies and America’s enemies being his allies, heaven only knows where he’s going with this one…or should I say hell only knows to be more exact.

And Obama stating that he will be issuing a ‘presidential directive’ (an order that has the same legal standing as an executive order that remains in effect until a change in administration deems otherwise),that will state the government can only use collected phone data for counterintelligence, counterterrorism and cyber-security to protect U.S. forces and allies, and to“combat weapons proliferation and transnational crime” is again even more hogwash as first, we cannot believe a single word coming out of his proven to be lying mouth (“If you like your current health insurance policy you can keep it…period”) and second, everyday Americans like you and me are NOT involved in spying, terrorism, cyber-hacking, weapons trading, or international crime and Obama and his NSA buddies know it as well as we know that it’s ‘We the People’ who will still be the ones spied on.

And proof is that Obama wants to give foreigners protections against spying and is directing the Director of National Intelligence and his ‘good bud’ AG Eric ‘Fast & Furious’ Holder to put in place safeguards as to how long the U.S. can hold information on non-citizens overseas, and restrictions on how the data is used.  This he does for non-Americans while ‘We the People’ continue to get the proverbial shaft…and again continue to be spied on.

But NO matter what changes Obama says he will make but NOT really do, the bottom line remains that Barack HUSSEIN Obama stands by and completely supports the NSA’s spying on ‘We the People.’  By calling said spying “necessary for national security” he continues to look away at what he called ‘the foreigners’ in our country…meaning his muslim brethren…who are the only real terrorists this program needs to keep track on. And being that he left all the final decisions primarily to Eric Holder’s anything but Justice Department and to intelligence agencies that oppose making any changes to the current surveillance operations at all, you just know this entire matter will soon be swept under the rug…or at least that is what Obama will try to do.

Maybe this time Congress will make sure it’s NOT but I’m NOT going to hold my breath for that.

Oh and by the way, Obama’s shiny and sweating face…that you can see got shinier, sweatier, and pastier as time went on…is a dead give-away that even he knows all his talk was NOTHING but empty political bloviatings…smoke and mirrors if you will…as he tried to get our attention focused off ObamaCare and Benghazi…and to that I say he failed miserably.